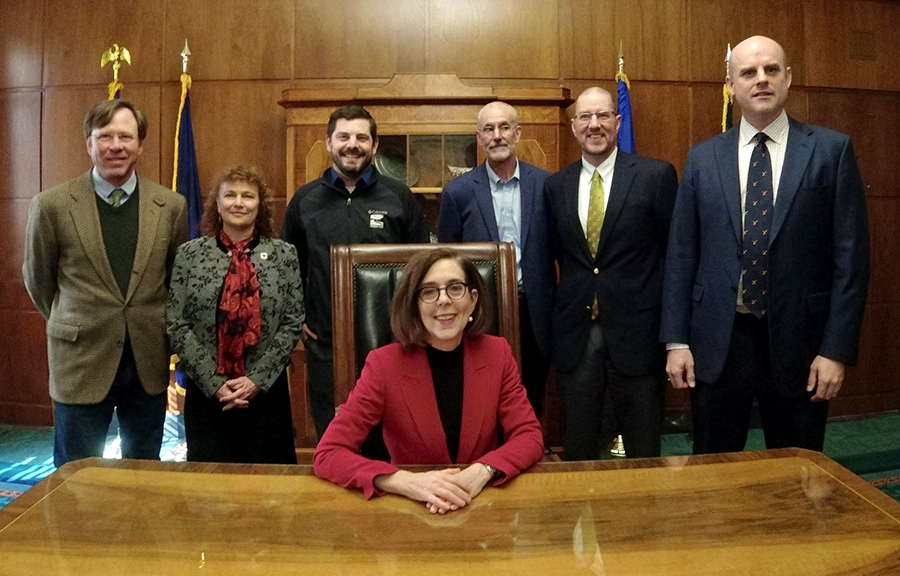 February 10, 2020: Governor Kate Brown announced a significant agreement between conservation groups and timber companies that will result in an update to the Oregon Forest Practices Act. The Oregon Forest Practice Act is a set of rules and regulations by which private and state forest are managed for timber production and environmental and human health protections. Beyond Toxics was a principle consultant on aspects of a Memorandum of Understanding that addressed notification of pesticide applications, notably aerial herbicide sprays, and protective no-spray buffers for streams and rivers.

FAQ created by the Wild Salmon Center:
“What Is The New Oregon Timber Pact?“

Beyond Toxics makes the following statement:

After nearly two decades of grassroots and policy work to remedy and update the gaps in the Oregon Forest Practices Act, Beyond Toxics is supporting today’s agreement because it presents an opportunity to work collaboratively on a path forward to reform of the OFPA. In light of an increasingly rancorous and partisan political climate building throughout our nation and state, we view today’s announcement as a uniquely Oregon-crafted effort to put conflict aside in favor of teamwork, science and a desire to protect forest resources for generations to come.

Although Oregon showed early leadership to pass timber harvest regulations in 1972, the OFPA has fallen continuously behind the expanding science and health data. Beyond Toxics has pointed to other Northwest states that already require better protections for water quality and fish habitat as well as provide for the public’s right to know about pesticides applied near their properties and in their drinking watersheds. We have spent countless hours with communities all across Oregon, from Baker County to Curry County, learning about their experiences with exposure to pesticides and their deep concern for the protection of their personal property, water quality and family health. We have worked diligently with these communities to bring their perspectives to the attention of state leadership.

Serving in a role as an environmental justice advocate, Beyond Toxics supports the agreement to jointly recommend significant improvements in pesticide application notifications and protections from potential spray drift for homes and schools. The agreement creates new transparency about timber uses of pesticides and also quadruples the protective buffer zones between homes and schools from aerial herbicide spray. Today’s agreement also begins the process to develop an Oregon Habitat Conservation Plan to build a framework for natural resource and environmental protections. The understanding reached between non-profit environmental protection groups and timber companies provides greater certainty to the communities that live near productive timberlands and the companies that provide the materials for Oregon’s wood products economy.

We hope that, together, Oregonians will move forward to support meaningful achievements for clean water, healthy forests, and community transparency around timber practices. We believe that environmental organizations and representatives of the timber industry can serve the nation as an admirable example of negotiating in good faith as we begin the work to lift community voices, guarantee protections for the environment and instill confidence in a vibrant future for healthy forests and the people who manage them and work in them.

Highlights of the Pact: