Washington, DC — (ENEWSPF) — December 23, 2013.  The Environmental Protection Agency (EPA) and the National Oceanic and Atmospheric Administration (NOAA) in a Federal Register notice has found that the state of Oregon’s program to reduce nonpoint coastal pollution is inadequate. Both federal agencies state that Oregon’s program does not adequately protect streams that provide habitat for Coho Salmon, an endangered species, and drinking water from herbicides that are aerially sprayed by lumber companies. This notice comes just after a recent report was released by Beyond Toxics on the health and environmental problems cause by aerial herbicide application on timber forests near Triangle Lake. 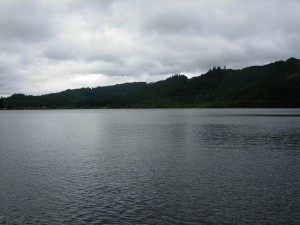 EPA and NOAA’s proposed disapproval action of Oregon’s Coastal Nonpoint Program finds that the state has failed to adequately protect certain waterways within the state. Under the Coastal Zone Act Reauthorization Amendments (CZARA) of 1990, states are required to submit an approvable Costal Nonpoint Pollution Control Program to NOAA and EPA. In 1998 federal agencies approved the Oregon Nonpoint Program with conditions that the state meet certain water pollution issues. This proposed disapproval action is part of a settlement of a lawsuit brought by the Northwest Environmental Advocates in 2009, which claimed Oregon has failed to meet the conditions of the Oregon Nonpoint Program’s approval. The federal agencies specifically found that the state did not meet the required conditions in three areas –storm water management, pollution from drain and leaky septic systems, and forestry practices.

In the area of forestry practices, the federal agencies found that Oregon’s forest practice rules, which require buffer zones for most pesticide applications, did not address aerial applications of herbicides on non-fish bearing streams. These streams provide Coho Salmon habita, and comprise a significant portion of the total stream length in the coastal nonpoint management area. For small, non-fish bearing streams, Oregon’s coastal nonpoint program submission relies on the state’s Pesticide Control Law at ORS 634, OAR 603-57, which requires best management practices set by the Oregon Department of Agriculture (ODA) and the Federal Insecticide, Fungicide, and Rodenticide Act (FIFRA). However, the disapproval action states that as a result of a 2007 lawsuit, which enforces a legal requirement that EPA consult with the National Marine Fisheries Service (NMFS), certain herbicides registered under FIFRA have been found through recent biological opinions (BiOps) to jeopardize certain listed endangered species.

The proposed disapproval action suggests that Oregon should expand its Pesticide Stewardship Partnership (PSP) monitoring program to watersheds that are within costal nonpoint management areas. The federal agencies are also encouraging Oregon to design its monitoring program in consultation with EPA and NMFS so that it generates data that are also useful for EPA pesticide registration reviews and new BiOps.

This proposed disapproval action also opens the agriculture conditions of the Oregon Coastal Nonpoint Program, which were approved in 2004, for public comment. According to the agencies, there is concern that water quality may be impaired from agricultural contaminants, such as nutrient and pesticide runoff, due to insufficient riparian buffers.

This proposed disapproval action comes just after Beyond Toxics released its report, Oregon’s Industrial Forests and Herbicide Use: A Case Study of Risk to People, Drinking Water and Salmon, which is an in-depth analysis of industrial forestry pesticide application records for the State of Oregon. The report focuses on the use of herbicides on 184,320 acres of private industrial and state forestlands surrounding Triangle Lake, a rural area in western Lane County, Oregon.

In 2011, atrazine and 2,4-D were found in the urine of residents around Triangle Lake. After these incidents, state and federal agencies launched the Highway 36 Corridor Public Health Exposure Investigation. The investigation resulted in the Oregon State Forester requiring pesticide applicators to turn over three years of forestry pesticide spray records from private and state timber operations, to which Beyond Toxics was given access. Beyond Toxics’ report contains several alarming findings. The report found that chemical regulations under the Oregon Forest Practices Act are weaker than regulations in Washington and Idaho. Unlike its neighboring states, Oregon has no spray buffers around homes, schools and farms, and has no protections of groundwater. The report also finds that the number of aerial sprays and pounds of pesticides applied per acre increased from 2009-2011, and that aerial sprays occurred directly over headwaters of protected Coho Salmon streams.

Even more troubling, the report finds that applicators use tank mixes of herbicides that contain two to five active ingredients and adjuvant products, despite a lack of understanding about synergistic effects of multiple chemicals combined and released into the environment. The report also strongly connects the pesticides found in the urine of Triangle Lake residents in 2011 with pesticides used in aerial applications. According to the report, the  pounds of 2, 4-D and atrazine applied by aerial spray increased by 80 percent and 73 percent in 2011.

Beyond Pesticides has long advocated for healthier and more environmentally friendly forestry practices. On a promising note, the U.S. Forest Service, the other major timber grower in Oregon, gave up nearly all herbicide use in the northwest back in the 1980s. Making this transition is economically possible, according to Jim Furnish, who managed the Siuslaw National Forest in Oregon in the 1990s. “It was more costly, more labor intensive. But forestry in Oregon is profitable under many different scenarios,” said Mr. Furnish, who later became deputy chief of the Forest Service. “The Forest Service just saddled itself to a different horse and rode off into the future.”