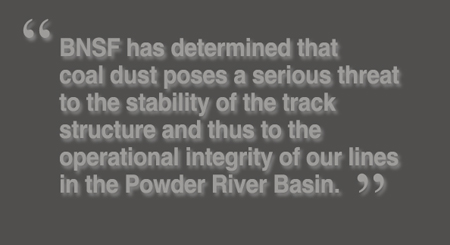 “BNSF has determined that coal dust poses a serious threat to the stability of the track structure and thus to the operational integrity of our lines in the Powder River Basin.”

VIDEO: See shocking raw footage of a coal train in transit (on YouTube) and the horrendous trail of coal dust it leaves behind!

The most recent accident in Eastern Washington…
About 25 coal cars derailed Monday on a train heading through Mesa. No injuries were reported. The BNSF train was passing through the small town in north Franklin County when the accident happened about 6 p.m. The overturned cars spilled coal, sending up a cloud of dust, but no fire was reported, according to initial reports from witnesses.

“These crashes serve as a stark reminder that more coal trains will cause more derailments,” stated Brett VandenHeuvel, Executive Director of Columbia Riverkeeper. “With the coal export proposals, our communities are threatened with 30 full coal trains everyday.” | Read more 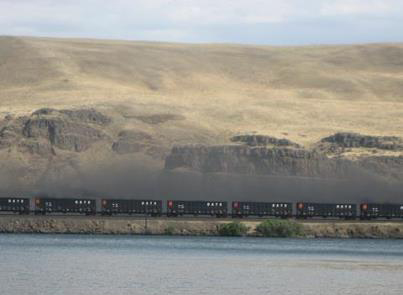 New photos of coal train in Columbia River Gorge debunk BNSF claim that “Coal spillage and dust events are normally seen only within a relatively short distance of the mine loading points in the Powder River Basin of Wyoming and Eastern Montana.