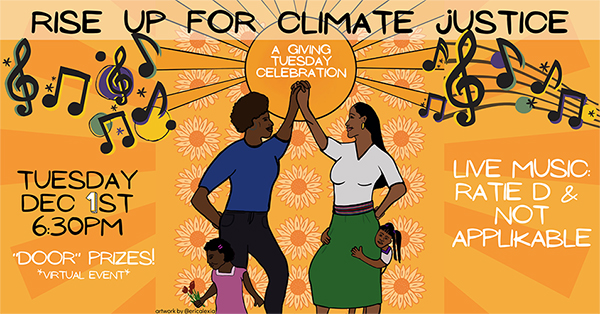 Join us on Tuesday, December 1st at 6:30 pm for an uplifting virtual membership meeting to learn about exciting new opportunities to lead Oregon on a path to climate justice. The event, Rise Up for Climate Justice: A Giving Tuesday Celebration, includes the premiere of a new short video, introductions of new staff members and live music by Ratie D and N/A – Not Applikable. 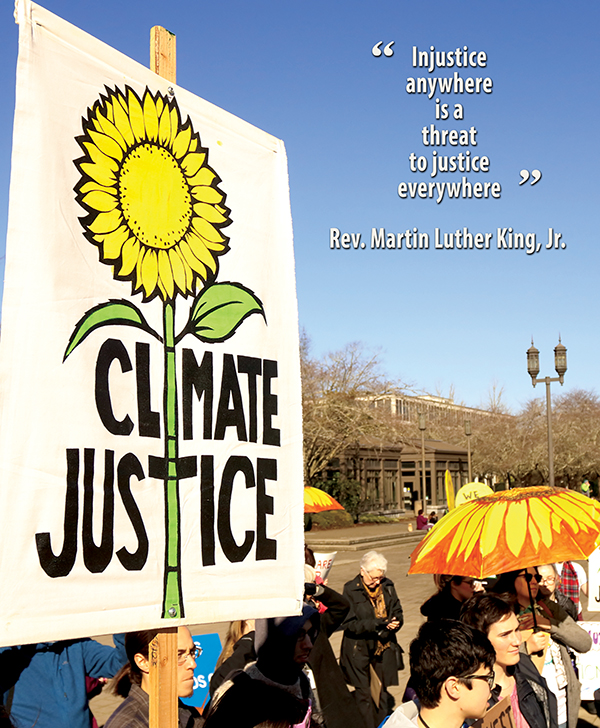 Read our most recent blogs on climate justice

Breathing life into our leaders of color
By Bianca Ballará on October 1, 2020

Tribal Climate Resilience in the Pacific Northwest
By Krystal Abrams on September 6, 2019

Governor Brown: “I’ve heard it loud and clear from our young people in Oregon: climate action is crucial and urgent. If we adults don’t take action right away, it is the next generation that will pay the price. We owe it to them to do our part to ensure that the globe they inherit is on a better trajectory than the one it’s on today.”

QUOTES from Ana and Pablo from their trip to the Solidarity to Solutions (Sol 2 Sol) Summit in San Francisco, spotlighting front line community solutions to the interlinked economic, democratic and climate crises currently threatening humanity:

“The planet should not be sold! It is loved and protected. Solutions for climate change should come from front line communities that are most impacted across the globe. Solutions will come from people who can shut it down. At the end of the day, climate justice is a life or death struggle for many.” – Ana Molina, Environmental Justice Campaign Liaison (see Spanish translation below*)

“Being in San Francisco for the Sol2Sol summit has made me think critically about the solutions to our global climate crisis. Although I do not have all the answers, one thing I certainly know is that those solutions are with the people, with the front line communities who have been fighting this struggle on a daily basis. Any solution that does not involve them is a false solution.” – Pablo Alvarez, Environmental Justice Community Organizer

The week of actions are intended to be a parallel to the Global Climate Action Summit (GCAS) currently being planned by California Governor Jerry Brown and global business leaders, where market-based schemes will be promoted as the ONLY response to climate change. We know that continuing down this path will only lead to greater devastation for our communities.

In the news:
Rise for Climate: Tens of Thousands March in San Francisco Calling for Fossil-Free World – Democracy Now! – SEPTEMBER 10, 2018

Endorse the Declaration:
I am…

Why We’re Involved
Climate change is a defining human rights issue at the intersection of environmental justice, racial justice, consumption and greed and natural resource protection.

On Feb. 12th, in a 7-1 vote in favor, Eugene, Oregon became the 2nd city in the world to endorse the International Declaration on Human Rights and Climate Change (and the first city over 100,000!).

The Declaration foregrounds human rights while simultaneously protecting the rights of living systems from climate harms. In moving forward with support from many other groups, we are combining new thinking and existing international human rights law.

Special thanks goes to Community Alliance of Lane County (CALC) and Sierra Club-Many Rivers Group for attending the City Council hearing and speaking in favor of the Declaration on Feb. 12th! Also, we recognize and appreciate the tremendous support offered by the NAACP Eugene Springfield Oregon and 350-Eugene in this effort!

Beyond Toxics has joined with a major network of international human rights advocates for a call-to-action for governments around the world. The guiding principles for this call-to-action are expressed in a Declaration on Human Rights and Climate Change. The Declaration was drafted by the GNHRE*, the largest network of human and environmental rights scholars in the world. Combining new thinking and existing international human rights law, the Declaration presents foregrounds human rights while simultaneously protecting the rights of living systems from climate harms.

For us, supporting the Declaration is joining in a clarion call to governments to transform the climate debate and address the human rights implications of climate change. Our vision is for cities across Oregon and our state governor to be the first in the United States to adopt the Declaration on Human Rights and Climate Change.

Three Reasons Why We Support This Declaration
The Top 3 Reasons Beyond Toxics urges you to be among the first to join Oregon’s grassroots movement to adopt the Declaration are:

1) It affirms the universality, interdependence of all human rights and the dependency of all life on Earth on a healthy biosphere and Earth system integrity.

3) It requires that all human beings have the right to active, free, and meaningful participation in planning and decision-making activities, particularly including the rights of indigenous peoples, women and other under-represented groups to equality of meaningful participation. This includes the right for processes to be free of domination by powerful economic actors. This includes the rights of indigenous peoples to participate in the protection of their rights to their lands, territories, natural resources, tenure rights and cultural heritage.

Other Resources on Human Rights and Climate Change 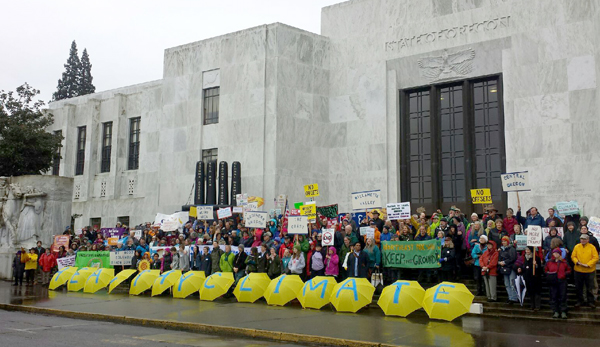 Beyond Toxics and NAACP Eugene-Springfield are partners in the work to promote climate justice through the principles expressed in the Declaration.
MORE on GNHRE (Global Network for the Study of Human Rights and the Environment)

Will you endorse the new Declaration on Human Rights & Climate Change? Fill out one of the forms below to register your support TODAY!

Endorsers of our Human Rights Declaration:

* About The Global Network for the Study of Human Rights and the Environment
The GNHRE was founded to pursue human and environmental justice through excellence in research, policy-making and practice. The GNHRE is composed of scholars from a range of disciplines including philosophy, ethno-ecology, human rights and environmental law and is dedicated to the transformation of thought and action in the face of the greatest challenges of the 21st century predicament—including climate change. The GNHRE is currently the largest international network of thinkers, researchers, policy-makers, opinion-formers and community activists in its field. The GNHRE constantly forges new conversations and relationships. It produces and exchanges thought leadership from world-leading scholars, bringing together top level research with insights drawn from community-embedded experience and praxis at the interface between human rights and the environment all over the world.

“The Declaration is statement by scholars across the world that our current approach to climate change is utterly inadequate in the face of this existential threat. Climate change is arguably the greatest human rights issue of all, and we call on every government to stand up as leaders in order to avert disaster—and to do so by questioning the ’taken-for-granted of the current framework of priorities.” – Anna Grear, Professor of Law and Theory at Cardiff Law School UK, and the founder and director of GNHRE