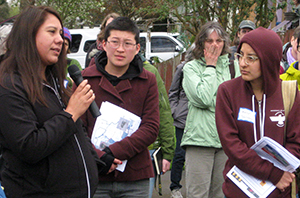 Clean Air and Water for Healthy Communities We insist that to protect Oregon’s air, land and water, policy must be framed using the lens of environmental justice. This approach ensures that all communities in Oregon, regardless of race, culture, ethnicity, geography or income, enjoy the strongest environmental protections. For example, we champion the Public’s Toxics Right to Know about what chemicals and pesticides are put into the environment. Communities that have access to the science and the facts about the pollution they face can be their own best environmental justice advocates. 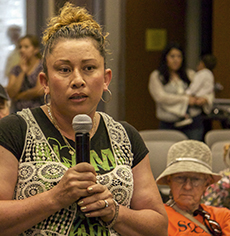 Worker Justice is Environmental Justice A large segment of our state’s population are blue collar and manual laborers. Those who work in sawmills, forests, factories, hotels, or on farms, are at high risk for chemical exposure and a host of safety hazards. These workers deserve protection from harmful chemicals known to cause cancer, nerve damage and lung damage. | MORE->> 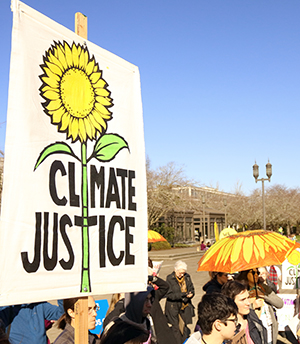 Beyond Toxics participates with Oregon coalition members like 350-Eugene.org and many others in rallies and action oriented meetings.

Climate Justice for All Our world is continuing to feel the effects of ever-increasing temperatures. Rising sea levels, drought, crop failures, and natural disasters are likely to worsen. Beyond Toxics is fighting for Climate Justice policies that are fair to disenfranchised communities. | MORE->> 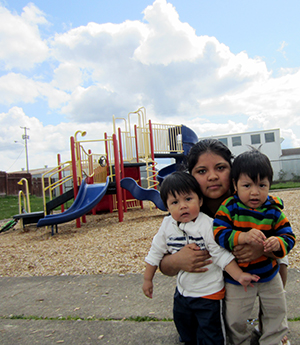 Mother with her two children in Lark Park near a West Eugene factory.

West Eugene Industrial Corridor Environmental Justice Project Children in West Eugene’s Trainsong and Bethel Community have double the asthma rate of the rest of Eugene. Due to a heavy industrial presence along Hwy 99 and West 11th, residents are often exposed to pollution from toxics hotspots. West Eugene is a place lacking in community investments. We are working on key projects to protect these vulnerable neighborhoods. | MORE->>

* Brownfield Redevelopment and Community Involvement: A Case Study in the City of Eugene, Oregon (A Beyond Toxics and Centro Latino Americano Environmental Justice White Paper)

* Read about an innovative, new project initiative that encourages local gardening and food production that is sprouting from our Environmental Justice project: My Garden – West Eugene…

Majora Carter on the Connection Between Race, Class, Environment and Health

In close partnership with Centro Latino Americano Beyond Toxics launched the West Eugene Industrial Corridor Environmental Health Project. The project grew out of concerns expressed from neighbors in the area of West Eugene immediately downwind from a (then) proposed biomass energy plant, which is now operating and burning forest by-products. These affected neighborhoods have higher percentages of minority, elderly, disabled and poverty level residents. Furthermore, these families are disproportionally affected by higher concentrations of industrial air pollutants from surrounding industrial sources. This collaborative project received two Environmental Justice grants from the US Environmental Protection Agency (EPA); the first grant in 2010 was one of only six awarded in the entire Northwest.

Action
Beyond Toxics, through the work of this project, is actively encouraging area residents to take part in proactive solutions they feel will improve their health. As part of our educational outreach, we are organizing several asthma awareness workshops in the West Eugene area to help residents learn of the dangers of asthma to their families and especially to children who are more vulnerable to pollution. We are collecting data, mapping relationships between air pollution sources and families with asthma and organizing community responses. (See the latest slide show )