Oregon’s OSHA (Occupational Safety and Health Administration) had proposed farm worker safety rules in 2017 that will affect farm workers across the state!
(see the editorials and news coverage below!)

The deadline for receiving comments from the public has now passed.

During 2017 Beyond Toxics attended 10 months of stakeholder meetings with OSHA, agricultural growers and farm worker advocates. These meetings focused on pesticide protections. We are concerned that OSHA’s proposed rule does not require pesticide-free buffer zones to protect the living areas where farm workers and their families sleep, cook, eat and play with their children. 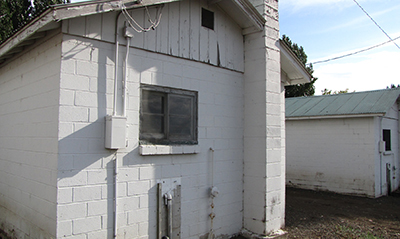 Farm worker housing in Medford, OR. Photo by Ana Molina

Background
In Oregon, many farm workers live on the work site during the preparation season, the growing season and the harvest season (March–October). They live in what is called labor housing located in the agricultural fields and orchards. Frequently, labor housing consists of small structures resembling shacks – there is no running water, bathroom or kitchen. Workers have to leave the structure to go to cooking, shower and bathroom areas. Windows are often boarded up with cardboard or plywood. Quite often, these are not air-tight structures.

The farm worker labor housing may be as close as 15 ft. to the crops and trees sprayed with pesticides, but is not included in the no-spray Application Exclusion Zone.

• Farm workers and their families have to evacuate by walking 150 ft. away from the housing and standing outside when the label requires the handler to use a respirator because the pesticide is so toxic and harmful to breathe. 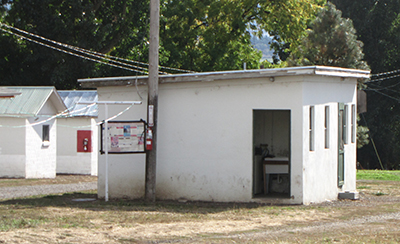 Summary
In both scenarios, farm workers and their families will continue to be exposed because they will come into contact with pesticides that contaminate farm worker housing, the kitchen areas, and bathroom and laundry areas. Also, evacuating 150 ft. to stand outside does nothing to protect people from breathing fumes and vapors drifting from the spray. Furthermore, OSHA is requiring a “15-minute waiting period” before workers return to the communal living area. Fifteen minutes is not protective when many of these pesticides, by law, require a much longer waiting period before workers can re-enter the sprayed area.

Did You Know that Fish in Streams Get More Protection than Farm Workers?
According to a long-standing federal court order, a minimum 300 ft. no-spray buffer is required to protect Pacific salmon and steelhead trout from aerial spraying of many of the same toxic pesticides commonly used in Oregon agriculture. This protection is put in place to save these vulnerable fish, so shouldn’t we also protect our vulnerable population of farm workers? Although there is the current 100 ft. Application Exclusion Zone for worker protection in the federal rule – protections now being eliminated by Oregon OSHA – Beyond Toxics believes 300 ft. should be the minimum. This is the moral and ethical standard, that we value our farm workers as much as we value fish. A 300 ft. no-spray zone would decrease the concentration of pesticide landing on areas that farm workers and their families live, sleep, cook, eat and play with their children.

Let’s Agree!
Neither sheltering in place nor walking 150 ft. away from an active spray operation are adequate protections for farm workers and their families. Requiring a no-spray buffer zone around farm worker housing and living areas – where people sleep, eat, bathe and play – is the most effective way to minimize their exposure risks to pesticides. At a minimum Oregon OSHA must protect farm workers and their families requiring a 300 ft.no-spray buffer zone that would help improve workplace safety and health for all farm workers in Oregon.

Farm worker housing is often located in the fields where pesticides are being sprayed.

If you’d like to submit more detailed/organizational comments, please send them to:
Department of Consumer and Business Services/Oregon OSHA
350 Winter Street NE Salem OR 97301-3882
Or email: tech.web@oregon.gov