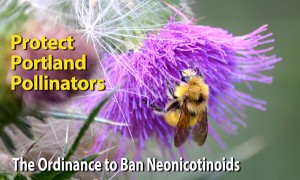 We are proud to announce that the Portland City Commission has voted unanimously to ban the use of  neonicotinoid pesticides on all city-owned property. It was passed with an emergency clause for immediate implementation. 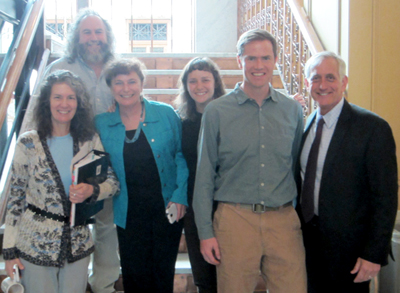 “These toxicants kill bees outright or slowly over time, so this ordinance is critical to protecting Portland’s burgeoning local foods movement,” said Lisa Arkin, Executive Director of Beyond Toxics, the group spearheading the adopted protections. “Bees pollinate over 30% of the food we eat and over 70% of all flowering plants. Importantly, children using Portland parks will be safer because of this ordinance.”

What can I do to help?
Please send messages of thanks to Portland’s leaders in appreciation for the Portland Ordinance to ban neonicotinoids on Portland City property: see Take Action to Protect Portland’s Pollinators.

Help Portland join other cities, including Eugene and Seattle, that have shown they care about bees by banning the use of neonicotinoid insecticides.

Background
Native and managed bees provide Oregon an amazing service. Their crop pollination service in Oregon is estimated at $600 million. That doesn’t even include the pollination service provided in our communities and natural areas. More than 70% of flowering plants require an insect pollinator to produce seeds.

Our bees are at risk. Bees struggle to find sufficient toxic-free forage. An important factor in their decline is their exposure to neonicotinoids and other harmful pesticides.

Neonicotinoids are highly-toxic to bees and other beneficial insects. Neonicotinoids caused seven high-profile bee kills in Oregon over the last two years, six of which were in the Portland metropolitan area. Studies have found that the levels of these chemicals detected in the environment can: reduce foraging capacity and queen bee production, reduce bees’ ability to collect pollen, and suppress their immune system.

These insecticides are also long-lived, building up in the environment from season to season. Furthermore, their systemic nature allows them to move through plants and into the pollen and nectar, providing a direct route of exposure to pollinators. Neonicotinoids are also being linked with cascading ecosystem failures because they decimate aquatic insects that form the bottom of the food chain for birds and fish.

How to get involved:
Take Action to Protect Portland’s Pollinators

Read more about our Save Oregon’s Bees project

Protect Portland’s Pollinators is a joint project of Beyond Toxics, the Xerces Society, the Center for Biological Diversity and The Portland Chapter of the Audubon Society.