Are you a business owner or part of a non-profit organization that wants to join the
Oregon Pollinator Protection Alliance (OPPA*)? JOIN US!

NEW! Beyond Toxics and GloryBee are working together to make Eugene a Bee City USA! 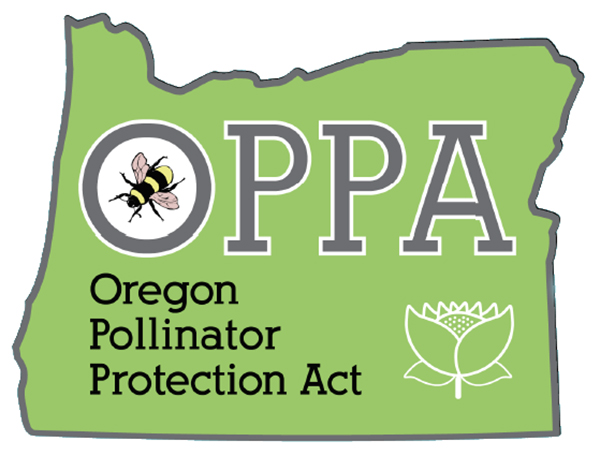 Across Oregon, native bees are rapidly disappearing from our landscape. This ecological catastrophe puts our ecosystems and food systems in peril. It is urgent that Oregon take action NOW to save bees from extinction! The Oregon Pollinator Protection Act (SB 929, co-sponsored by Sen. Prozanski and Rep. Pam Marsh) ensures that homeowners don’t reach for bee-killing pesticides on store shelves, bringing these poisons home. This will make a significant difference in the survival of native bees across the state! The last place for dangerous and persistent poisons is in the yards of Oregon homeowners. – Scroll down to read more…

Are you a business or organization that would like to endorse the Oregon Pollinator Protection Act (SB 929)? Just fill out our endorsement form! 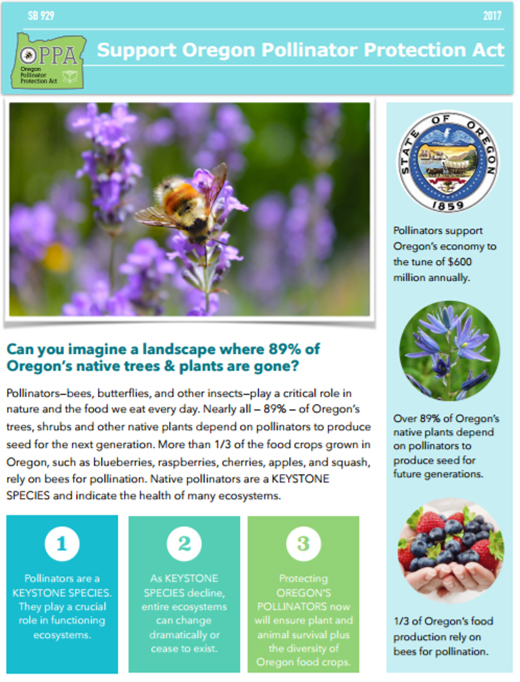 PURPOSE:
Classify Neonicotinoid pesticides, which are linked to the decline of honey bee colonies and native bees, as a Restricted Use Pesticide (RUPs). (Bill number coming soon!)

RUPs have the potential to cause unreasonable adverse effects to the environment and injury to animals, applicators or bystanders without added restrictions. The “Restricted Use” classification restricts a product, or its uses, to use by a certified applicator or someone under the certified applicator’s direct supervision. RUPs are not available for purchase or use by the general public.

The Oregon Department of Agriculture has already restricted neonicotinoids: it is illegal in Oregon to apply any product containing dinotefuran, imidacloprid, thiamethoxam, or clothianidin, regardless of application method, to linden trees, basswood trees or other Tilia species.

The proposed legislative concept would require State Department of Agriculture to adopt rules prohibiting the sale and use of pesticide products containing nitro-group neonicotinoids to any person who is not a certified applicator holding a current pesticide applicator license, or a person working under the direct supervision of a certified pesticide applicator, or a licensed veterinarian.

For the purpose of prohibiting a person from selling at retail sites material, seeds or plants that have been treated with a neonicotinoid pesticide on or after January 1, 2018.

Requires the Oregon Department of Agricultural to define neonicotinoids and list them as a Restricted Use Pesticide.

Requires the Department of Agriculture to limit the use of neonicotinoid pesticides to the general public;

Requires the Department of Agriculture to incorporate the RUP classification of neonicotinoid pesticides into the State’s Pollinator Protection Plan;

Any person who violates any provision of this article is guilty of a misdemeanor. Unless another penalty specifically is provided elsewhere in this article, the person, upon conviction, is subject to a fine not exceeding $1000.

Unless another penalty specifically is provided elsewhere in this article, any person found guilty of a second or subsequent violation of any provision of the same title, is subject to a fine not exceeding $2,000, or imprisonment not exceeding one year, or both, with costs imposed in the discretion of the court. For the purposes of this section, a second or subsequent violation is one which has occurred within two years of any prior violation of this title and which a rises out of a separate set of circumstances.

Are you a business or organization that would like to endorse the Oregon Pollinator Protection Act (SB 929)? Just fill out our endorsement form! 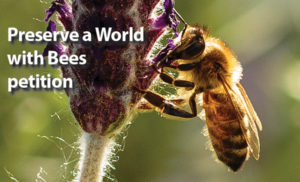 Sign our “Preserve a World with Bees” petition TODAY!

Preparing for Spring gardening?
Read up on the products to avoid
Bee-Friendly Gardening Fact Sheet (PDF)

“Sign the Petition to Protect Monarch Butterflies under the Endangered Species Act!“ (TakePart)

What you can do to support campaigns to save bees everywhere:

Facts about the Importance of a Neonicotinoid Ban

Bee Kills Demonstrate the Need to Take Action
In Oregon, seven neonicotinoid insecticide applications in the summers of 2013 and 2014 caused the death of nearly a 100,000 bumble bees representing hundreds of colonies. Poisoning incidents occurred in Beaverton, Eugene, Portland, Wilsonville and other cities. High-profile investigations by the Oregon Department of Agriculture implicated dinotefuran in two of the kills and a closely related pesticide, imidacloprid, in the others. These insecticides, along with clothianidin and thiamethoxam, are neonicotinoids, the most widely used group of insecticides in the world. They are highly toxic to honey bees, as well as many native pollinators, including bumble bees.

Scientific Community Confirmation of Neonicotinoid Toxicity
Neonicotinoids were recently evaluated by a large panel of experts chartered under the International Union for the Conservation of Nature (IUCN), known as the Task Force on Systemic Pesticides. This panel assessed effects of systemic insecticides on an ecosystem level, reviewing approximately 800 peer-reviewed articles on neonicotinoids, and another systemic insecticide fipronil.

Their report, entitled the “Worldwide Integrated Assessment on Systemic Pesticides,” is being published serially in Environmental Science and Pollution Research. Key findings include:[1]

Neonicotinoids are present in the environment “at levels that are known to cause lethal and sublethal effects on a wide range of terrestrial (including soil) and aquatic microorganisms, invertebrates and vertebrates.”

The active ingredients persist, particularly in soils, with half-lives of months and, in some cases, years.

The metabolites of neonicotinoids can be as toxic or more toxic than the active ingredients.

Standard methods used to assess the toxicity of a pesticide (e.g. short-term lab toxicity results) fail to identify the subtle, yet severe impacts of neonicotinoids.

The most affected group of species include insect pollinators. Furthermore, harm to pollinators has been demonstrated at field relevant levels.

Concerns for aquatic insects
All neonicotinoids exhibit high water solubility (e.g. Gervais et al. 2010), and accordingly, have the potential to move into surface water or leach into ground water.

Extremely low concentrations, regularly found in surface water are linked with harmful effects to a wide range of insects. The effects of neonicotinoids also appear to be near irreversible. That means that their effects are cumulative over time.

Researchers concluded that:
“Existing information presented here suggests that stricter regulations and use of neonicotinoid insecticides are warranted to protect aquatic ecosystems and the broader biodiversity they support. (Morrissey, C. et al. 2014)

Furthermore, IPM uses a variety of methods to address pest problems. In many IPM programs pesticide use is only when other methods are ineffective or not feasible. And then the most narrowly focused, least toxic products are selected and used in the most targeted manner possible. When neonics came on the market many were considered reduced risk. Unfortunately, due to their persistence in plants, soil and water, their high toxicity to beneficial insects it is becoming increasingly apparent that their use is harmful.

For Portland to remove highly toxic, long-lived, broad spectrum insecticides is compatible with IPM and shows how the city is able to adapt as new science comes available.

The new rules by the Oregon Department of Agriculture do not address many of the risks associated with neonicotinoids.
The Oregon Department of Agriculture banned the application of neonicotinoids on one species of tree in 2015. ODA’s new rules are specifically designed to stop incidents of bumblebee mortality from acute exposure. The rule only applies to one species of pollinator attractive tree. Independent, peer-reviewed, published research has documented numerous hazards to native and managed bees from low level, field realistic chronic exposures to neonicotinoids. For example, bumble bees can suffer reduced reproductive success after low-dose field realistic neonicotinoid exposure. Researchers have also measured a reduction in both honey bee and bumble bee’s foraging ability after very low, field realistic exposures. These subtle effects can severely compromise population fitness and growth.

More broadly, a recent analysis was conducted by a task force of 29 independent scientists from around the world. The task force evaluated more than 800 peer-reviewed studies on neonicotinoids and another systemic insecticide fipronil. Their findings, also peer-reviewed and published, conclude that present day legal use of these compounds is likely to cause a wide variety of negative impacts on pollinators, other beneficial invertebrates and the broader environment.

Human Health Concerns
A major increase has occurred over the last two decades in human consumption of neonicotinoids via their incorporation in fresh and processed foods and beverages, as well as human consumption of meat and poultry from animals fed with neonicotinoid-treated feed. Many uncertainties exist as to whether consuming neonicotinoids in food or beverages, including water, may adversely affect human health, with recent concerns focused on harm to the developing brain via in utero exposure.

Several analyses have focused on neonicotinoid residues in tea, with one study in particular focusing on potential neurotoxic symptoms that may have resulted from consuming high amounts of contaminated tea.

According to the 2012 USDA Pesticide Data Program, imidacloprid was the most commonly detected neonicotinoid found on foods sampled, with 13 of the 20 varieties of fruit and vegetable tested containing imidacloprid residues. The highest levels were found in cauliflower (30.1%), sweet bell peppers (26.3%), summer squash (22.6%), cherry tomatoes (22%) and winter squash (17.4%).

The second most commonly detected neonicotinoid was acetamiprid, prevalent in baby foods and apple juice, in addition to sweet bell peppers.

Research exists to suggest that the “allowed tolerance” levels of pesticide residues is flawed in general, and specifically flawed when applied to infants and children, whose immune systems are not fully developed, However, in most cases, the neonic residues reported by the USDA do not exceed the FDA’s tolerance levels.

Currently, there is inadequate data and numerous uncertainties regarding risks to humans from eating and drinking higher levels of neonicotinoids. Until further research is conducted, EPA’s current assessments cannot reasonably determine whether tolerances for neonicotinoids will or will not have unreasonable adverse effects on human health. When in doubt about acute and chronic effects of pesticides on human health, we must err on the side of caution and do what is necessary to eliminate the presence of systemic pesticides in our food, water and soils.

Read more about our Save Oregon’s Bees project 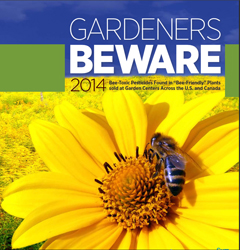 AS PART OF OUR FEBRUARY 2014 EUGENE BEE SWARM, we’re encouraging people to contact Home Depot and Lowe’s to demand that they remove products containing neonicotinoids from their store shelves…

MAIL IN YOUR cards and letters directly: 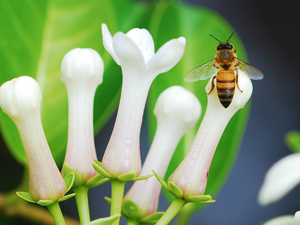 Other actions you can take…

3) Call on Oregon businesses to stop using dinotefuran and other neonicotinoid insecticides that we know are lethal to our bees. We know Oregon’s businesses can do better, and we’re asking them to start using safer alternatives. | Sponsored by Oregon League of Conservation Voters

Please help us save Oregon’s bees! Become a member of Beyond Toxics TODAY!