"Bee Friendly" Plants Can Be Poisonous To Pollinators

Ark / Bees / "Bee Friendly" Plants Can Be Poisonous To Pollinators

"Bee Friendly" Plants Can Be Poisonous To Pollinators

A national report released Wednesday finds that half of the plants sold at major retailers as "bee friendly" are actually poisonous to bees. The plants are pre-treated with pesticides that are harmful to pollinators according to the study by Friends of the Earth. 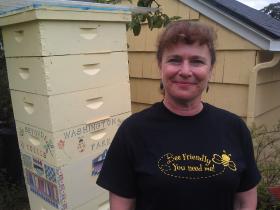 Lisa Arkin of Beyond Toxics with her backyard beehive in Eugene.
Credit Rachael McDonald

Neonicotinoids are pesticides that kill bees and other pollinators. Lisa Arkin is with Eugene-based Beyond Toxics. She says retailers don't label plants to indicate whether they've been treated with these chemicals.

Arkin: "Consumers are completely unaware that the flowers they're purchasing to create a bee-friendly garden might actually be poisoning the bees."

Arkin suggests purchasing organic plants and asking retailers if the plants are free of pesticides. The report sampled plants from Lowes, Home Depot and Walmart in the U.S. and Canada. A spokeswoman for Home Depot says the store is actively seeking alternative insecticides for protecting bees.

Last week, a company sprayed Linden trees in Eugene with a neonicotinoids-- killing hundreds of bees. The Oregon Agriculture Department penalized the company.