Stories From Our Communities 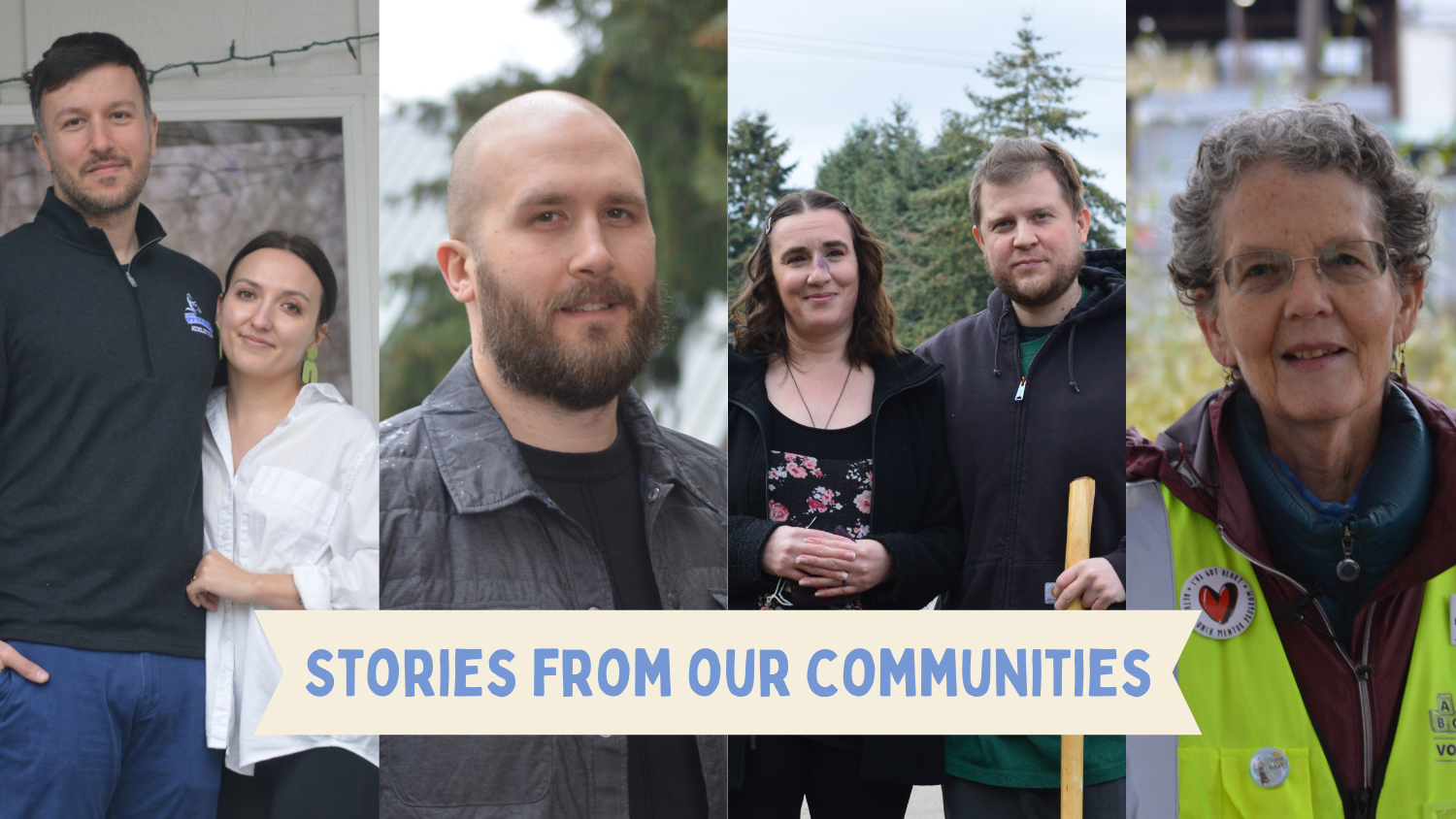 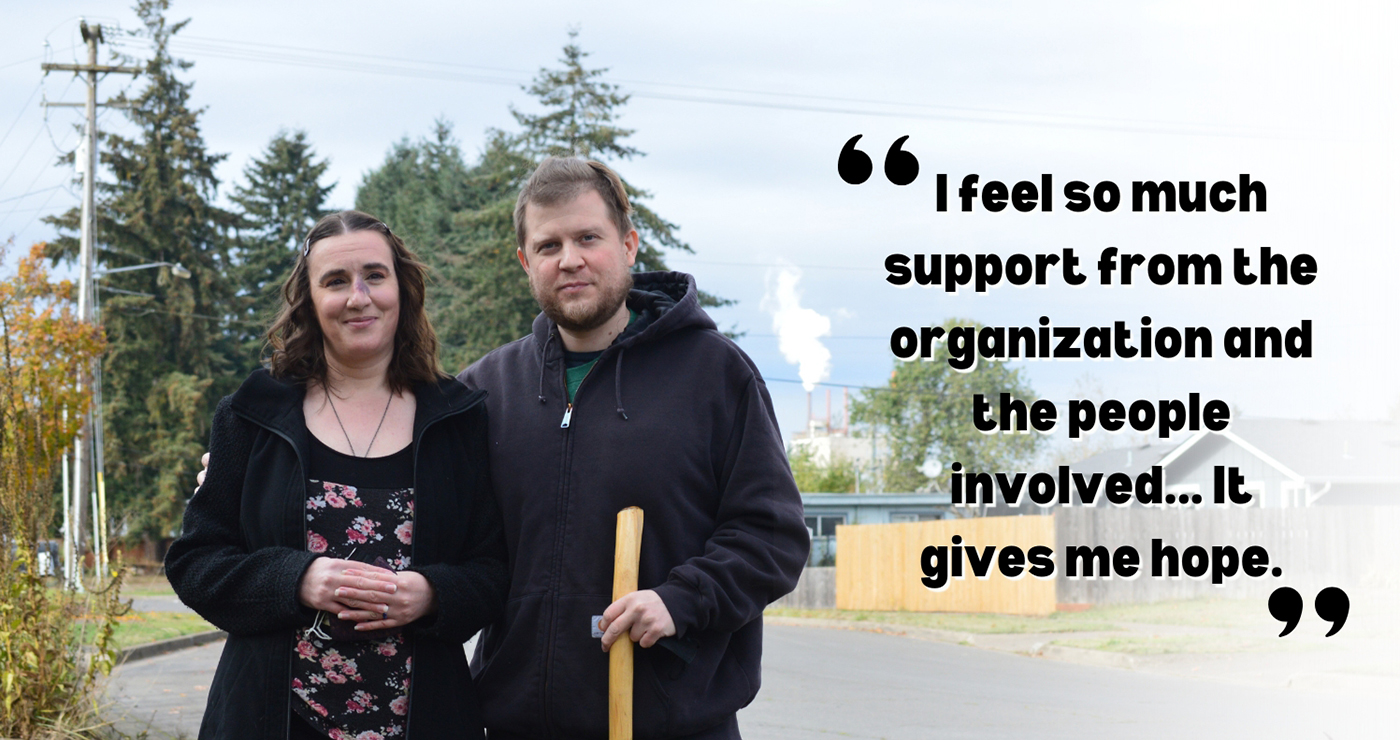 For nearly seven years, Jessi and James have lived in their current Springfield home. A plume of gray-white smoke billows out of smokestacks visible from their front yard. The smell is unmistakable. They live in the shadow of large industrial polluter International Paper.

In recent years, the family has faced a number of health issues. Their youngest, a nine-year-old, began experiencing eye irritation and nose bleeds after spending any amount of time outside. The older child, a fourteen-year-old, has had gastrointestinal issues his whole life, and was recently diagnosed with a condition that, if left unchecked, could lead to stomach cancer.

“As a mom, I am really passionate about taking care of my kids,” said Jessi. “That took up so much of my time – I didn’t really think about the health effects that it was causing me until I got told I had breast cancer.”

The family went looking for answers. Although they visited numerous doctors, none were able to identify the source of the problem. Tests revealed the parents aren’t genetically predisposed to cancer, and they lead otherwise healthy lifestyles. Though they wouldn’t name air pollution specifically, doctors agreed: their health issues are likely related to environmental causes.

Jessi and James felt alone in their struggle against nearby industrial polluters and felt ignored by the agencies responsible for regulating them.

“This is potentially causing life-threatening illnesses for my family and the people that live here. I don't want to see people lose their jobs… We would just like to see some regulations put in place that the people who live near these places have their health taken into account, not just profits for rich people who don’t even live near these facilities,” Jessi said. “Low income people like ourselves are so impacted and nobody will listen.”

That’s where Beyond Toxics comes in. Our team has been laying the groundwork for grassroots community organizing in the neighborhoods affected by industrial polluters in Springfield. We’ve been listening to the community’s needs, conducting surveys and outreach to these neighbors and providing resources, such as air quality monitors, to families like Jessi and James.

“I feel so much support from the organization and the people involved. Nowhere in the United States is there an organization like Beyond Toxics that has that much outreach and that much compassion toward the community members,” James said. “Not just in our experience, but from what I’ve witnessed in west Eugene with J.H. Baxter."

“It gives me hope,” he added. “The future can be bright because there are people who care about the environment and about low income people.”

Jessi agreed that finding Beyond Toxics was like breathing a sigh of relief, knowing that they’re not alone in this struggle and that our team has had success with major industrial polluters.

Our team is working to ensure this community has the resources it needs to fight for the right to clean air. Our goal is to protect and empower families to stand up for their health and demand their governing agencies take their health into consideration when making decisions.

Andrea's Story
With the closure of one major industrial polluter, there is still work to be done. 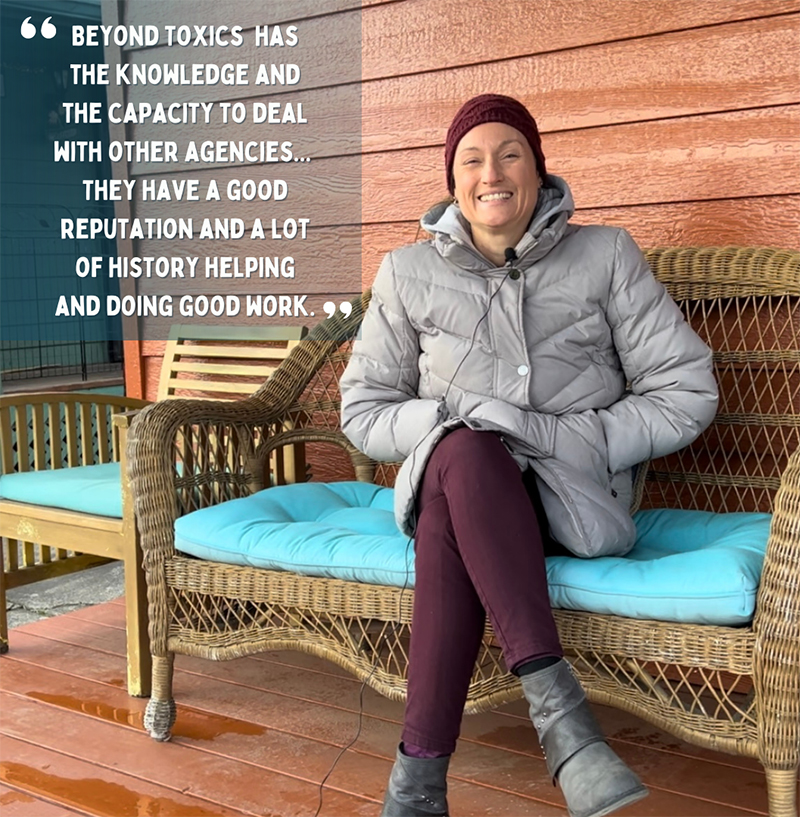 When Andrea moved into her West Eugene home in 2010, she wasn’t aware of the threat of industrial pollution looming in the neighborhood. She loves her family’s home and appreciates the diversity among their neighbors.

“We like it here,” she said, “But the problem with pollution has been a real detriment.”

She and her neighbors filed complaints with local agencies regarding horrible fumes from industrial facilities. When it felt like no one was listening, they wanted to give up.

“It was really discouraging,” said Andrea. “We didn’t have the means to just up and move, so it was tough.”

About a year ago, Andrea connected with Beyond Toxics and soon learned that we never give up. We worked relentlessly to shut down the wood treatment facility J.H. Baxter. Finally, in January 2022, the polluter was found to be the source of severe dioxin contamination and J.H. Baxter closed…and the community finally got the clean air it needed. But families in the Bethel area are still experiencing the lingering effects of industrial air and soil pollution on their health and wellbeing.

Though the plant closed, Andrea still smells horrible odors in the neighborhood from other polluters. Now, she’s concerned about the level of dioxins in the soil as well.

“We haven’t had the opportunity to have our yard tested, and gardening is a very big part of our lives,” Andrea said. “We eat the food from our yard and like to spend time outside so the issue with dioxins is very concerning.”

Companies like J.H. Baxter must be held accountable for the harm they create in the cities where they operate. Beyond Toxics is working to stop polluters that operate at the expense of the public good for decades and then close without consequence. Public health should be our priority.

“In the future, my hope for this neighborhood is that we can get a public health overlay zone to protect myself, my family and our neighbors from future pollution and toxins in the neighborhood,” Andrea said. She added that she hopes more community involvement will lead to Bethel becoming “a neighborhood that is respected and supported instead of pushed to the side to make room for industry.”

Beyond Toxics has the drive and the knowledge to keep fighting for clean air and healthy families like Andrea’s.

In 2018, Mira and Matt purchased their first home together in West Eugene. They love the neighborhood and their neighbors, and said it’s the best part of Eugene they’ve lived in so far.

“It’s just the pollution part that we don’t love,” Mira said. “We’re surrounded by a variety of different industries.”

Between the multitude of factories, trains, and semi trucks frequenting the factories just across the expressway from their home, the noise and air pollution is noticeable here.

“We didn’t experience this in the other parts of Eugene that we lived in so getting used to it has been a process,” she said. “And it’s unfortunate because we shouldn’t have to get used to pollution.”

While working from home during the Covid-19 pandemic, the couple began to notice just how bad the toxic smells coming from the area’s industrial polluters. They began to wonder what they could do to change the situation. They joined Beyond Toxics’ community workgroup to take action and have since spoken with city council members and effectively promoted public health policies. 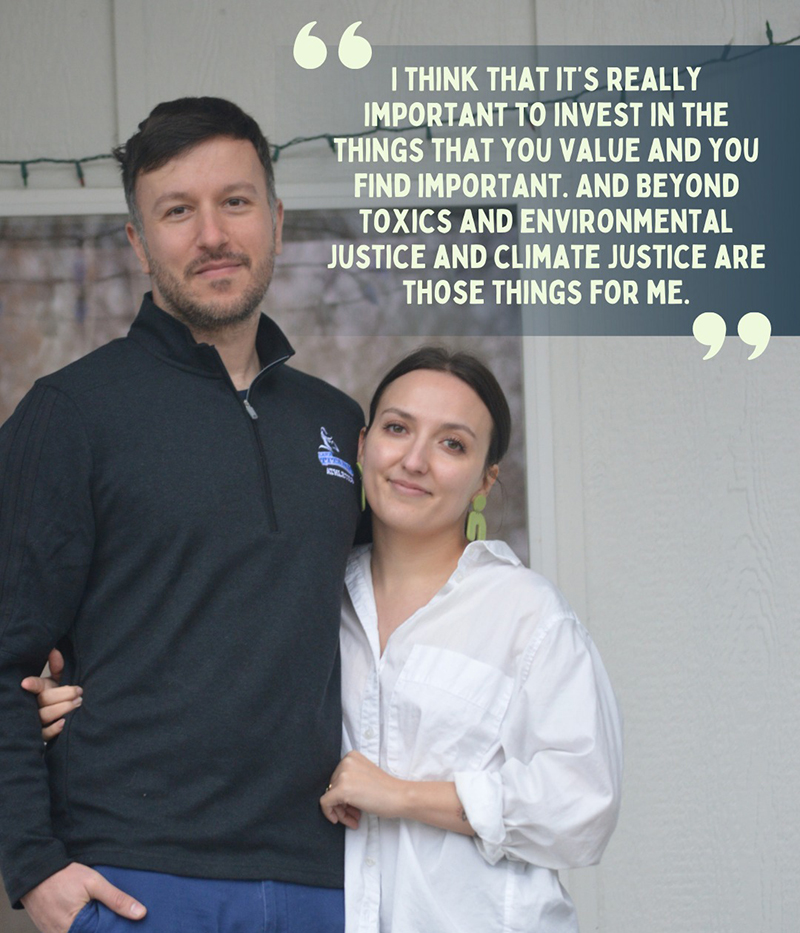 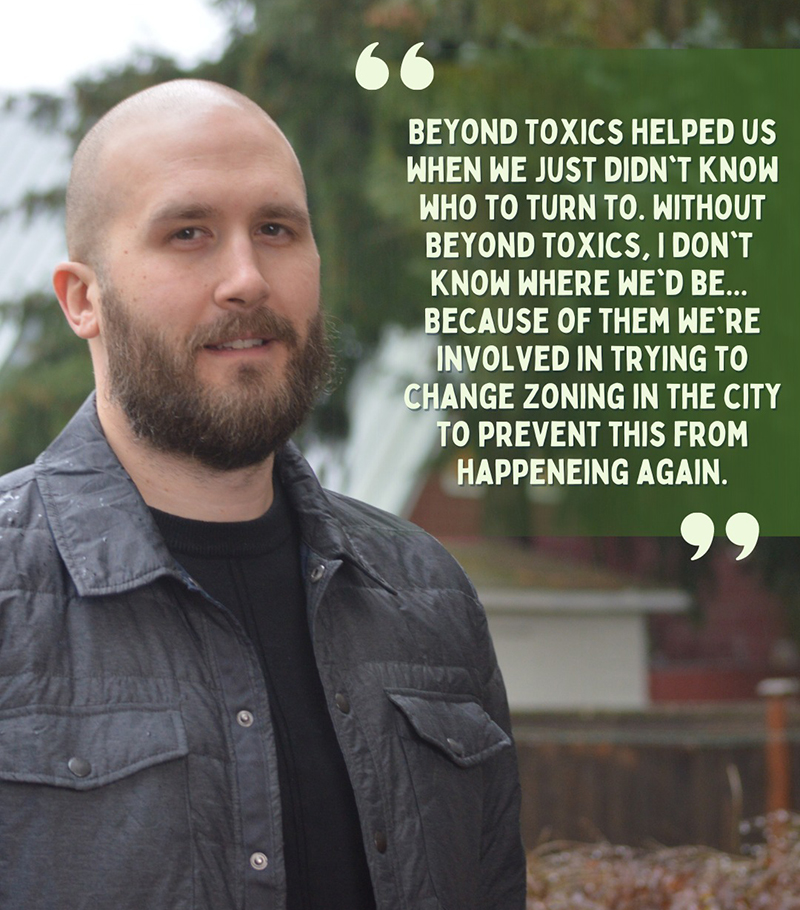 Jeremy and Ali have lived in their Bethel neighborhood home for four and a half years. The large backyard opens up to Peterson Barn Park, has plenty of gardening space and room for fetch with their pup. They, too, noticed the stench of industrial pollution shortly after moving in.

“Initially it was something we’d notice almost daily, any time we’d go outside there was like a really strong toxic odor,” Jeremy said. “Our dog would smell it, we would smell it, so if we were trying to run outside or walk outside we’d have to immediately come back inside. The longer that we were exposed to it, the more it would irritate your lungs and eyes.”

Lin is a longtime Bethel resident and community activist and has lived in the area for over 25 years. She is co-chair of the Active Bethel Citizens organization that partnered with Beyond Toxics and other community members which teamed up to find solutions to the pollution problems plaguing their neighborhood.

Together, with Beyond Toxics, Lin is working with local agencies to bring about change. The agencies, “listened to what the people feel, what we smell and how we’re living and what dangers there are to us. Lin said the agencies finally realized that “Bethel neighbors are people, and not just data points.” 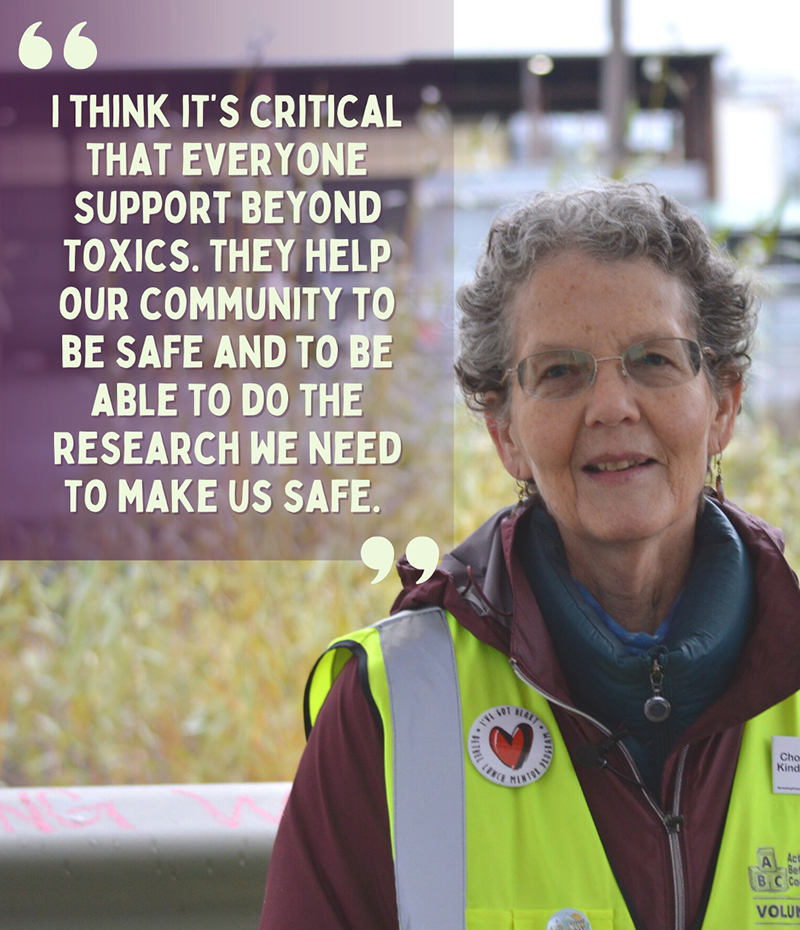 Stories From Our Community is a series that explores real ways Beyond Toxics is making a difference in the lives of our community members. The series is written by Emily Matlock, Membership and Communications Coordinator at Beyond Toxics and former journalist.

Now, Beyond Toxics is working to prevent the next major industrial polluter from taking up residency so close to where Bethel-area neighbors live, work and play by advocating for a Public Health Overlay Zone with the City of Eugene.

By supporting Beyond Toxics, you’re supporting a healthier environment for all, especially those in traditionally underserved and vulnerable communities.

Thanks to your generous support for our matching gift campaign, we're at 77% of our goal of $25,000!

Invest in local environmental justice communities!
For the month of December your gift DOUBLES your impact!