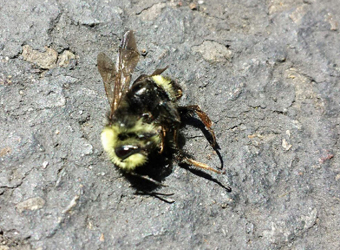 Thousands of bumblebees perished in Eugene in late June and a tree spray company faces investigation by the Oregon Department of Agriculture. (Photo by Lisa Arkin, Beyond Toxics)

Around the country and worldwide, bee poisoning incidents point to the grave threat that neonicotinoid insecticides pose. In Europe, a temporary ban was placed on three neonicotinoids. In Canada, new restrictions are being considered for seeds treated with these chemicals. The U.S. Environmental Protection Agency recently initiated a review of neonicotinoid pesticides, including a specific evaluation of the risks to bees.

Here in Oregon, in response to the local bee-kills which resulted in the loss of approximately 55,000 bees, the Oregon Department of Agriculture (ODA) stopped the use of two neonicotinoid pesticides – dinotefuran and imidacloprid – on Linden (Tilia) trees during bloom.

In recent years, bees have been dying off in droves. First in France in the mid-1990s, then in the U.S. and elsewhere, colonies have been mysteriously collapsing with adult bees disappearing, seemingly abandoning their hives. In 2006, about two years after this phenomenon hit the U.S., it was named “Colony Collapse Disorder,” or CCD. Each year since, commercial beekeepers have reported annual losses of 29% – 36%. Such losses are unprecedented, and more than double what is considered normal. Two points of consensus have emerged in all the discussion about the mystery of CCD:

Multiple, interacting causes are in play – key suspects include pathogens, habitat loss and pesticides. Immune system damage is a critical factor that may be at the root of the disorder. Pesticides may pose significant damage to bees immune systems by weakening their defenses.

Although managed honey bee losses have been linked to multiple factors—including Varroamite infestations, pathogens, malnutrition and habitat degradation—a strong and growing body of scientific evidence suggests that neonicotinoid pesticides are a major contributing factor.Neonicotinoids, manufactured primarily by Bayer CropScience, Syngenta, and Dow AgroSciences, are used extensively in agricultural and urban/suburban areas. The neonicotinoid imidacloprid—introduced in 1994—is the most widely used insecticide in the world. Neonicotinoids are used as seed treatments on more than 140 crops, with virtually all corn, and a large percentage of soy, wheat, and canola seeds planted in the U.S. being pretreated with neonicotinoids.

Neonicotinoids are systemic pesticides that are taken up through roots and leaves and distributed throughout the entire plant, including pollen and nectar. These pesticides can poison bees directly, but even low-level exposure can lead to sublethal effects such as altered learning, impaired foraging and immune suppression, which exacerbates the lethality of pathogen infections and mite infestations. Unfortunately, home gardeners have no idea they may actually be poisoning pollinators through their efforts to plant bee-friendly gardens.

After you click on the green button (below), simply choose “Save Oregon's Bees.” from the “I want my donation to be designated toward” drop-down option. We need and very much appreciate your support for this project!