Read the Beyond Toxics News Release on the two Winter 2014 Legislative Victories: "Eugene City Council bans neonicotinoids and Oregon Governor signs bee protection legislation: Both policies are first to pass in the nation!"

Feb. 28, 2014 At the request of Beyond Toxics, Eugene’s City Council Wednesday night (2/26/14) voted to ban the use of neonicotinoid pesticides on city property. The Council Resolution, "Enhancing Current Integrated Pest Management in Parks," also expands the current Pesticide-Free Parks program and requires all city departments to adopt the same IPM standards and protocols as the City’s Parks and Open Space Division.

The Eugene City Council resolution, the first one of its kind in the nation, passed by unanimous consent in a council work session. The language of the resolution specifically includes a strong concern for children’s health as well as protecting bees and a host of other pollinators in Eugene’s environment. (Read the Feb. 28th Press Release) 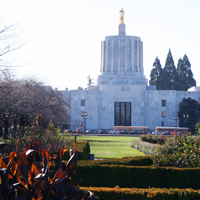 This is the nation’s first statewide legislation passed with the intent to better protect pollinators from the highly toxic class of pesticides called neonicotinoids. The compromise bill passed both the House and Senate with overwhelming bipartisan support.

The bill requires all pesticide applicators to receive training on ways to protect pollinators from pesticide exposure. The pollinator protection information will also be included in applicator licensing exams. The bill also establishes a task force required to study additional bee-protection measures and to work towards offering the 2015 legislature a proposal to protect Oregon’s vitally important pollinators.  More details about the bill.

The 2014 Bee-Fest Celebration was a HUGE success! (May 31, 2014 at Washington Park Community Center in Eugene). We celebrated the passage of the City Council resolution that banned the use of neonics on city property: the first such ban in the nation!

AS PART OF OUR FEBRUARY 15, 2014 EUGENE BEE SWARM ON EUGENE'S HOME DEPOT, we’re encouraging people to contact Home Depot and Lowe’s to demand that they remove products containing neonicotinoids from their store shelves…

What Home Depot has said in response to the national February 2014 Bee Swarm protest:

After you click on the green button (below), simply choose “Save Oregon's Bees.” from the “I want my donation to be designated toward” drop-down option. We need and very much appreciate your support for this important work!