The Eugene Public Health Overlay Zone
TAKE ACTION!
Speak Up to Protect the Air, Water and Soils of Eugene's Neighborhoods from Industrial Polluters! 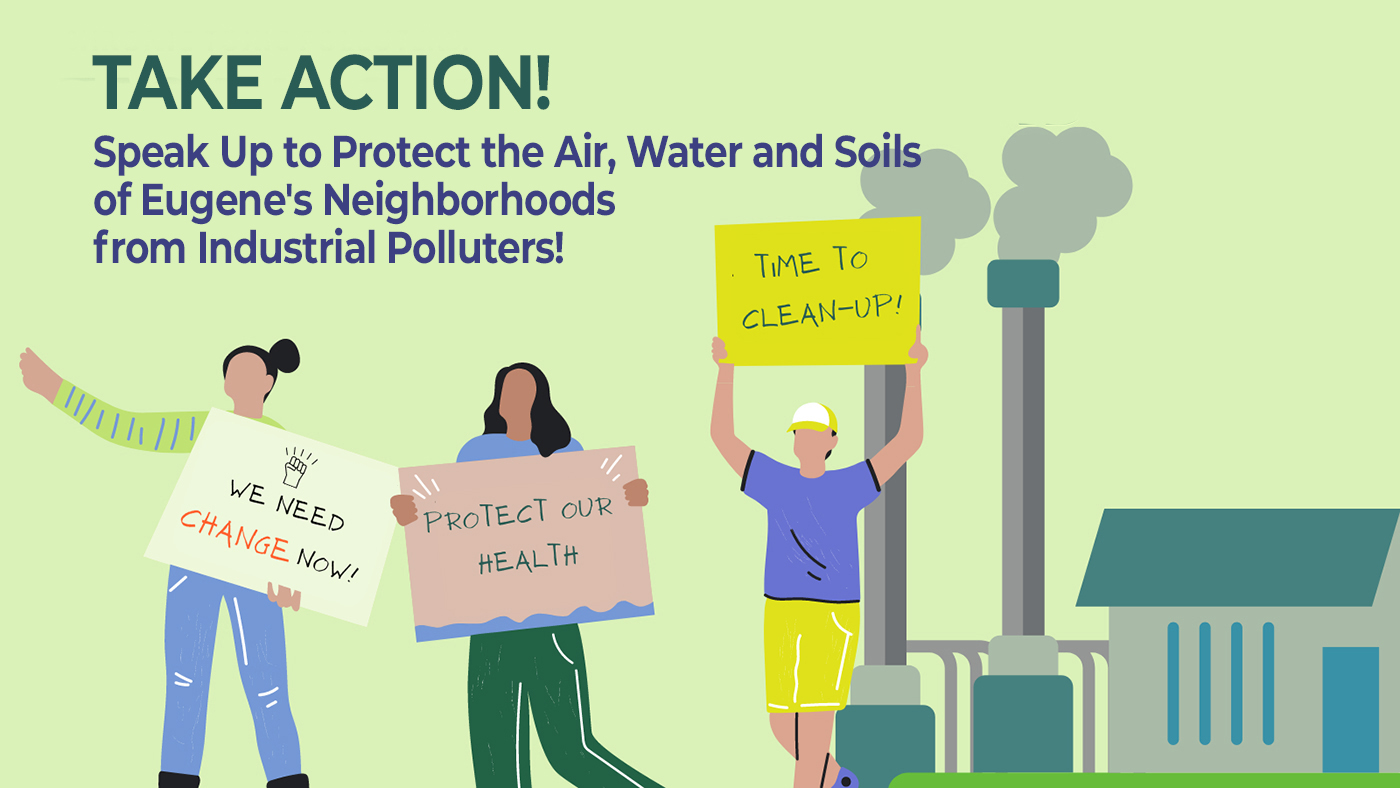 Beyond Toxics is fighting for better air quality!

Beyond Toxics is fighting to get ahead of the pollution problems confronting our neighborhoods. Based on what we have all learned from the debacle of extreme community harm caused by JH Baxter, we have proposed that the City of Eugene adopt a Public Health Overlay Zone. We need your voices - emails, phone calls, and testimony to city council - to support prioritizing public health over increasing industrial emissions inside our urban boundaries.

The Eugene City Council's work session to decide what direction to take on a Public Health Overlay Zone has been postponed until September. Let them know you want to see our City step up to protect all our residents from air, water and soil pollution.

Read the talking points below to guide you.

What is an OVERLAY ZONE FOR PUBLIC HEALTH?

An overlay zone is an additional land use zoning code that applies to established residential neighborhoods and industrial zones.

A Public Health Overlay Zone is an additional land use zoning code that applies to established residential neighborhoods and industrial zones. These types of zones are designed to ensure that future land development projects promote a healthy environment and improved quality of life for surrounding neighborhoods. The City of Eugene adopted a similar land use concept in 2017 when it annexed lands to add acres for industrial and manufacturing jobs in the Clear Lake Road area in West Eugene.

Risk Bonds are used to ensure financial responsibility for the impacts of future releases on surrounding neighborhoods and public infrastructure.

What will this do for Eugene communities?
The Public Health Overlay will uphold the community’s values around climate change, sustainability, health, local food systems, and conservation of natural resources. These new rules are designed to reduce pollution and improve public health for the local community going forward.

Why do we need a PUBLIC OVERLAY ZONE?

Eugene needs a Public Health Overlay Zone to correct and move away from historical patterns of placing low-income and racially diverse communities closest to heavy industrial polluters. A PHOZ can protect our community by:

* West Eugene has the worst pollution problems in Eugene with most of the large polluters in Eugene located there. Bethel has large sections of industrial land and freight rail lines adjacent to residential properties and located near schools and parks, including the industrial corridors along Hwy 99 and Roosevelt. West Eugene needs a public health overlay zone!

* JH Baxter shows the need for the City to take proactive measures to stop bad polluters before they locate near residences. We also need to hold companies accountable if they are bad actors.

* Eugene has the authority to make decisions about how we will deal with new and existing public health threats by building protections into our local land use codes. Authority can be spelled out through updates to the City’s land use codes or through an overlay zone.

* The Clear Lake Overlay Zone is a model that can be used and expanded on to protect the public in other parts of the City where Industrial lands are currently close to homes, schools and parks, or may be so designated in the future. The Clear Lake Overlay Zone prohibits some of the worst polluters known to emit chemicals that cause cancer, heart disease and pulmonary disease from operating in our city.

* Send an email or call your city councilor and the Mayor. Find your City Councilor->>
* Let them know that you want to see our City step up to protect all our residents from air, water and soil pollution.