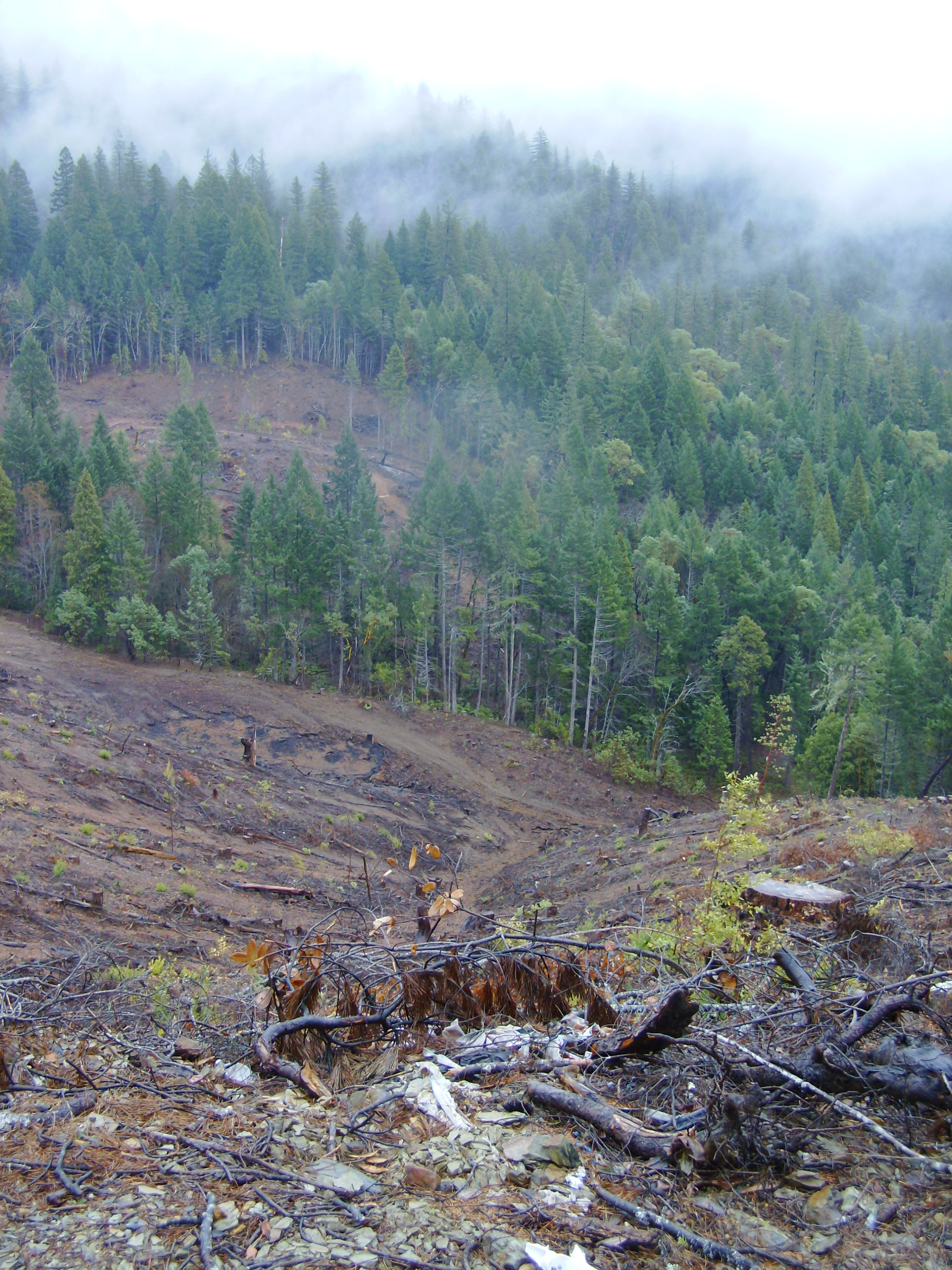 Pesticides were sprayed on this steep clear cut.

Then there is the way we do it in Oregon. We are governed by the Oregon Forest Practices Act (FPA), now 42 years old.  When first conceived, these rules were touted as a model for environmental stewardship.  Today they are woefully outdated. Comparing Oregon’s forest policy to those in other western states reveals that our forestry stewardship standards are far weaker in every respect.

A September 28  guest editorial, “Federal forestlands would benefit from Oregon rules,” recommended that the management of 1.5 million acres of federal forest land in Oregon should be logged by private timber corporations and managed under Oregon’s obsolescent Forest Practices Act.  That is tantamount to privatizing public lands and avoiding compliance with the federal Clean Water Act, the Endangered Species Act and the Northwest Forest Plan.

The authors’ thinking is outdated.  Perhaps they still imagine that Oregon’s rural counties are solely timber-dependent.  They haven’t considered current economic data from the State Employment Department that shows a diversified economic future.  Employment in the logging and forestry industry in Oregon is being outpaced by jobs in manufacturing, leisure and tourism, recreation and health services.  A survey of local elected leaders conducted by The Resource Innovation Group, affiliated with Willamette University, found that a number of rural county commissioners fear that privatizing the federal forests could “undermine future economic progress” by sending the counties backwards to a narrowly focused reliance on heavy logging, reminiscent of the 1970’s and 1980’s.

The states of Washington, California and Idaho require environmental protections on state and private lands that protect clean water and people. At the same time, timber companies in these states continue to profit from timber operations. Why can’t we do that in Oregon?  For example, Weyerhaeuser, one of the world's largest private owners of timberlands, is headquartered in Washington where the company must obey the Washington Forest Practices Act. In doing so, timber corporations like Weyerhaeuser limit the same harmful and destructive logging practices they regularly employ in Oregon, and still maintain a healthy bottom line.

The editorial authors – Salwasser, Lorensen and Brown – claim that federal forests management goals for both harvest and habitat reserves are “impoverishing” rural communities.  Their perspective, lacking modern day economic and science models, fails to take into account how Oregon’s logging practices externalizes the costs of destructive activities onto rural communities. Oregon’s FPA rules tend to promote extensive clear cuts and chemical spraying to manage forests. The result: rural Oregonians are reporting more soil movement, muddy streams, pesticide exposures and increased costs to ensure that their drinking water is safe and sanitary.  Under the lax rules in Oregon, our rural communities face rapidly increasing threats to themselves, the health of their children and the safety of their drinking water.

A 2012 Oregon Health Authority investigation detected two pesticides regularly applied by aerial helicopter on commercial forest land in the bodies of Triangle Lake residents. The agency suggests that pesticides, such as atrazine and 2,4-D, are drifting many miles from where they are applied. Unlike other states, the Oregon FPA does not provide a protective pesticide buffer zone for rural homes.

This summer, thousands of people in Florence found out that, under the FPA, a cocktail of herbicides will be sprayed adjacent to their public water source and directly on the streams that feed their drinking water aquifer.  Ironically, the landowners, who live in California, would be required to obey California’s laws to protect public water if their timber holdings were in their own state.

The risks to Oregon’s environment were highlighted in a recent geospatial mapping study of an 180,000 acre section of the Siuslaw Watershed. This analysis, conducted by Beyond Toxics, found unsustainable logging trends.  Three years of data provided by the Oregon Department of Forestry  (2009 –2011) revealed that the total acres of clear-cuts increased by 56%. Every clear-cut was sprayed by air with pesticides multiple times over the three years, and resulted in a 99% increase in chemicals sprayed upon the land.  Aerial helicopter herbicide spray came as close as within 60 feet from drinking water aquifers, lakes and salmon habitat streams.

The US Forest Service examined the science of pesticide use decades ago, and as a result, ended the practice of aerial herbicide sprays. The Oregon data, showing increasing clear-cutting and subsequent aerial pesticide sprays, should raise serious questions about water quality.

Oregonians rightly expect their government to heed the science and take timely action to protect drinking water and public health.  It is time for Oregon’s Legislature to modernize the Forest Practices Act.