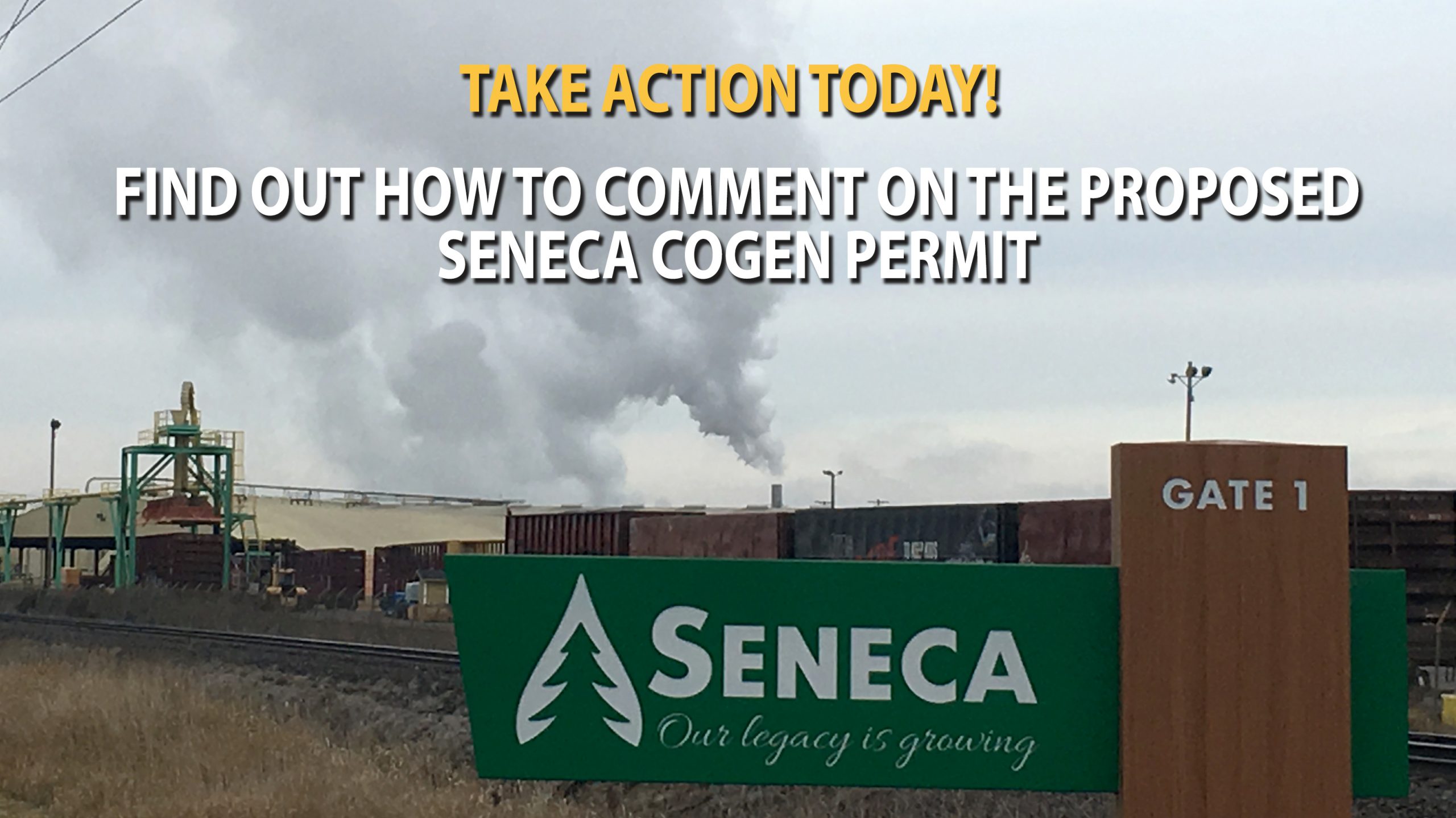 288 tons per year of air toxics are coming our way!

You have an opportunity to offer your comments on a plan to greatly increase dangerous air pollution in West Eugene! Beyond Toxics is hosting a community meeting to reveal the details of proposed new air pollution permits and help you know what you can do about it. Two major industrial polluters, Sierra Pacific-Seneca's Cogeneration (biomass) and Sawmill plants, are seeking permits to emit four times more hazardous air pollutants and two and a half times more volatile organic compounds than is currently allowed, as well as a significant increase in tons of fine particulate matter.

The Lane Regional Air Protection Agency (LRAPA) is considering new air pollution permits for two facilities, locally known as Seneca Sawmill and Seneca Cogeneration. The two polluters are located on Highway 99 just barely beyond the Eugene city limits. Beyond Toxics is hosting an informational meeting covering the details of air pollution permits and offering assistance to write your public comment.

Sierra Pacific, LLC, a California-based timber company known for aggressive business practices, bought the Seneca Cogen (biomass) and Sawmill plants in August 2021. Less than a year later, Sierra Pacific applied for new permits to increase air pollution from the two Highway 99 facilities. The Cogen plant seeks to increase fine particulate matter from 14 to 24 tons per year. This pollutant causes stroke, heart attack and chronic respiratory illness, such as asthma. In a related permitting process, the Sawmill is increasing hazardous air pollutants from 24 to 62 tons per year. Hazardous air pollutants include toxics such as formaldehyde, benzene and methanol. These chemicals can cause cancer, neurological damage and respiratory problems.

Both facilities are large producers of climate-driving greenhouse gases (although GHGs are not currently regulated by the permit).

Our community can stand together to call for reducing air pollution and protecting public health!

Introduction
The Sierra Pacific-Seneca Sustainable Energy facility (known as Seneca SSE or the Seneca Cogen plant) is applying for a new Title V permit. The Lane Regional Air Protection Agency states that the air protection agency is “compelled to issue air permits for applications of permit renewals and permit modifications if they are complete, technically sound, and meet all LRAPA regulations.” That is true, yet LRAPA can do more to make permits as protective of public health and clean air as possible. It is important that you submit comments to make the permitting process better. The most effective testimony is achieved when you tell your own story … how do increases in air pollution affect you and your family? Do you have examples of when you have had trouble breathing during bad air days? Have you noticed poor air quality connected with the Seneca Sustainable Energy (biomass) plant?

Our talking points below are a simple guide to some of the important changes in the proposed air permit that you should be aware of and address in your comments, in addition to your own experiences.

1. Seneca Sustainable Energy (SSE), also known as Seneca Cogen, as well as two Seneca sawmills in Lane County, were purchased by the Sierra Pacific Industries in 2021. The new owner seeks to increase profits at the expense of our community’s health and livability.

2. While both the Cogen facility and the Eugene Sawmill have separate air permits through LRAPA, they currently share a combined emissions limit of 25 tons per year (typ) for federal hazardous air pollutants (FHAPs or HAPs). FHAPs are pollutants deemed so hazardous they are regulated in air quality permits because these chemicals are known to cause cancer or other serious health effects, such as reproductive effects or birth defects. This new permit for SSE – along with the Sawmill’s permit – turns these two facilities into “Major Sources” for FHAPs and removes the 25 tons per year emissions limitation.

3. As Major Sources, both facilities and their emissions will be governed by the Maximum Achievable Control Technology (MACT) Standards. MACT standards are technology-based rather than health-based. They use the FHAP emissions of the best-performing (or, “Maximum Achievable”) industrial sources to set the minimum standard that an industry must meet in order to comply. Technology based standards include such equipment maintenance requirements as increasing the number of tune-ups performed. However reductions in FHAPs based on public health standards is not a requirement.

4. The increase in toxic air pollutants impacts the West Eugene and NW Eugene airsheds and can increase the already higher rates of asthma and cancer for the people in these neighborhoods. These neighborhoods already bear a higher pollution burden than other Eugene locations.

1. These increased emissions can have severe health impacts and will add to cumulative air pollution harms. These impacts will be primarily experienced by our neighbors living in West Eugene.

2. LRAPA should not allow such high Plant Site Emission Limits (PSELs), which are the legal limits for air toxics emissions. LRAPA should use Potential to Emit (PTE) as the highest limit, which would reflect new rules in the upcoming DEQ rulemaking on air toxics. The difference for Volatile Organic Compounds would be 1.1 tpy for PTE limits versus 39 tpy using PSEL limits. That is more than a 37 ton pollution difference.

3. It is particularly important that PM 10 and PM 2.5 be kept to the 11 tpy PTE and not the 14 tpy PSEL because Seneca has had a history of changing their calculations of fine particulate matter and asking for increases in the amount of particulate matter pollution they are legally allowed to emit. For example, in regards to their 2013 permit, Seneca SSE said that all PM 10 emissions are the same as PM 2.5 emissions and requested limits increases from 14 tpy to 16 tpy.

4. Stack tests are currently required every 5 years. That is not sufficient data collection. We request LRAPA to require annual stack testing, and that stack testing be performed during start-up and full-run scenarios. Stack testing should reflect the “worst case scenario” when used to determine compliance.

5. On poor air quality days, when the air quality index is over 101 (Unhealthy for Sensitive Groups), LRAPA should require Seneca Sustainable Energy to reduce production as a means of reducing particulate and other air toxic emissions in our airshed for public health benefits. Industrial polluters should be required to do their part to reduce exposures to air pollution exactly the same as residents are asked not to use fireplaces or wood stoves, or to limit the times they fill up their gas tanks, or to stay indoors and limit their outdoor activities.

How to Submit Comments to LRAPA:

NOTE: If you wish to mail your comments, they must be received by LRAPA by 5:00 pm on July 27th to be considered as a part of the record! Take time in the mail into account.

Find out more about our campaigns for better Air Quality->>