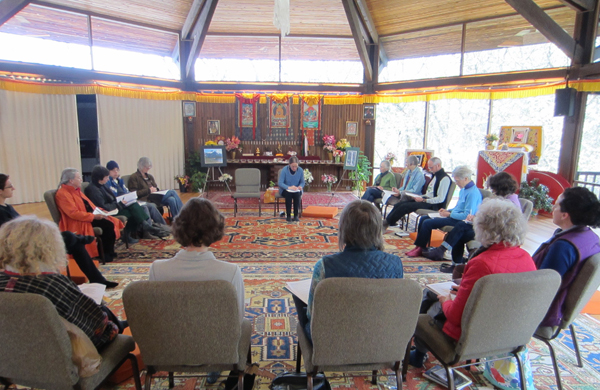 The Names We Know: Poems of Forest Stories
A poetry workshop held on April 5th led by Carter McKenzie

Poems in Response to the Subject of Shared Habitats

“To be intimate with the land…is to enclose it in the same moral universe we occupy, to include it in the meaning of the word community.” —from The Rediscovery of North America by Barry Lopez

In April, Beyond Toxics held its first-ever poetry workshop, which was led by Beyond Toxics board member and poet Carter McKenzie. Titled “The Names We Know: Poems of Forest Stories,” the workshop’s focus was to discover and share through poetry an articulation of engagement with forests. Among the subjects explored were personal witness of individual trees, experiences of water and salmon as life sources, and the idea of seeds as vessels of a future shelter. We were grateful for the presence of all who attended this gathering, and for their thoughtful contributions. On this page we are pleased to share poetry selected from submissions by workshop participants; some of the poetry was initially created during the poetry session. Also featured here are more recently submitted poems and prose on the subject of shared habitats. 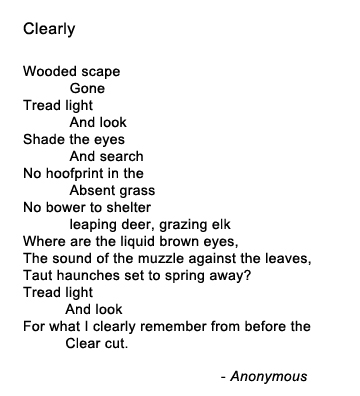 The following poems are by Evelyn Hess, written in response to writing ideas shared at the workshop The Names We Know: Poems of Forest Stories on April 5, 2014. Evelyn is the author of To the Woods: Sinking Roots, Living Lightly, and Finding True Home, published in 2010 by Oregon State University Press.

The cool north side of my hill
is moss-covered.
Duck-footed Vancouveria,
sword ferns, fringecup and trillium abound.
A restful place.

The sun’s first rays work their alchemy
on tree-moss
draping Douglas fir
on the east side.
And the sun’s last rays reflect pink puffs
In the eastern sky.

Our solar panels charge beneath
the southern sun.
Hillsides grow iris, sarvisberry,
Over-eager blackberry and oak.
Lizards scramble among rocks,
along concrete walls, and up their sides.

To the west of us the hill rises,
cloaked in dense
and skinny second-growth fir
that blocks the sun from wishful carpets
for the forest floor
and screens from our eyes the setting sun.

Assignment: Write about a tree

An old juniper grows
in the high desert
of Flagstaff, Arizona.
More than two-thousand years old,
its gnarled and armored branches snake
over slick silver long dead arms,
reaching to the sky.

Trees and shrubs grow wide apart
in this arid country,
each a small oasis
for squirrels and birds.
Humans who shared this space with the juniper’s sapling
knew too to conserve
for precious water.

Assignment: a forest river or watershed

I have no river to call my own,
but sit by yours, if I have the chance.
Water creatures, waiting to fly or crawl away:
dragonflies, newts, feed on others and are themselves
food for fish, for frogs and turtles.
Time is a river: Downstream flows yesterday;
Upstream is tomorrow; today tickles my feet.
But timeless, a river is not.
Giving too much to too many humans, it goes dry
Used as a garbage dump, the life-giving water poisons.
As the river dies, so do the caddis flies, the salmon, the water ouzel,
streamside poplars and willows,
agriculture
the children
and their tears. 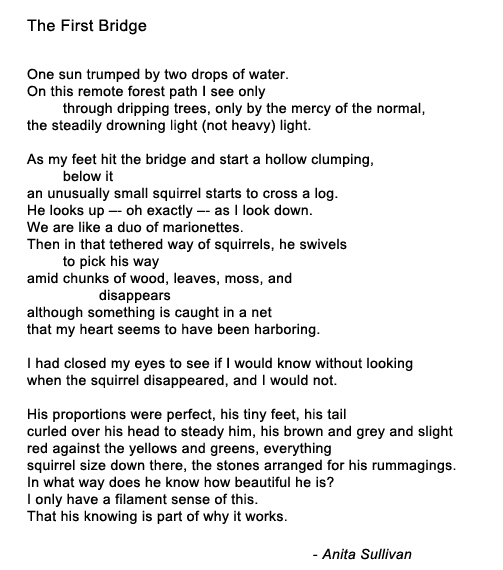 You Could Be a Tree

You could be a tree
Or maybe take a leaf of wisdom
Out of a tree’s book.
To stand still,
Wave your arms in the May breezes
And watch squirrels go,
Go about their play, and busywork.

You could be a tree
Or maybe rest among its roots for awhile.
Sink your feet in the soil
Wiggle your toes, settle in,
Feel the sun on your face.
Be a nurturer, a sentinel,
A guardian of the almost quiet,
Rustling and bird song.

This afternoon I put the Smith River garden down. Granted, one does not dig a hole out back, lead the garden next to the edge, and shoot it, even though all morning I felt as though I were driving out to put my old horse out of our collective misery. In these parts you kill a garden simply by taking down the deer fence. I was unarmed, so on the way in I stopped at Jerry and Martha’s to borrow a fence post puller, then drove to the Johnny Gunter cabin and went inside for a pair of wire pliers. Even though it was Memorial Day Weekend, it had been a cold, rain-filled, godforsaken spring and the grass was still wet, so I had to make a run at the hill. I pulled the utility trailer into my parking place between the big old apple tree and the garden gate and got out. I hoped that the garden didn’t suspect what was coming, that it would never know what hit it. The annual rye I’d planted for ground cover last fall was a foot and half high, with pale green seed heads beginning to ripen and nod over. Volunteer kale that had fed me all winter were four feet tall and sporting clusters of small, bright yellow flowers. Bindweed, the damned bindweed that was always sneaking under the fence like a stray cat in heat, had made it inside and was happily flowering too. This afternoon digging it out would be as useful as picking fleas off the old horse.
Gray clouds swirled in from the west, dropping heavy mist while I traveled from post to post using the pliers to remove the clips that had held the eight-foot woven wire fence in place, the thin barrier protecting the garden from protracted death by grazing. I jacked the red metal posts out of the wet ground and clanged them into the trailer. Grabbing the fencing, I heaved backwards, pulling it loose from the grass and knapweed that over the years had grown tightly around the bottom, then gathered it into an eight-foot-long cylinder and barrel-rolled it across the meadow to the barn. No boundaries now existed between the garden and the wild world outside, no more reason for me to mow and till and fertilize and plant and weed and water and harvest. The deer and elk would have their way with it.
You see, the garden was never mine, at least in the narrowest sense of possession. When the logging company next door had come to take their trees out, they surveyed the property. Come to find out, my garden was on their side of the line. They were nice about it—said I could keep gardening there as long as I liked. But after clearcutting the hillside they planted the meadow to Douglas fir seedlings. That’s what logging companies do—they plant, grow, and cut down Douglas fir.
Unfortunately they also spray herbicides over the landscape, presumably toward one end—to grow more fir trees faster. So a sea of chemicals now surrounded my garden. This isn’t just a figment of my overstimulated imagination; the meadow is turning browner by the day except for the 30- x 45-foot parcel that was not sprayed because they were nice to me and spared my garden.
But there are no islands, not in this meadow, not anywhere. My garden beds have damp spots where water has percolated up through the soil from somewhere nearby, and all the surrounding ground has now been bathed in herbicides. The chemicals will wash off the meadow and hillside into the little creek where torrent and giant salamanders live, and the creek will carry the stuff through the culvert under the road and into the marsh in the valley bottom where chorus frogs breed, and the marsh water will seep into Smith River where orange crawdads crawl and baby Coho swim.
There are no islands. Yet surveyors walk the land with the gadgets of their trade—sextant, compass, clinometer, theodolite—sighting imaginary lines, pissing out make-believe corners with stakes and gaudy colored plastic tape. The surveyors write numbers on a piece of paper describing this fantasy. Then somebody somewhere finds some money, probably not even their own, and purchases that little piece of paper, and the fantasy of ownership continues with rights and privileges that may or may not have anything to do with the connectivity of the biosphere. The surveyor’s sextant is agnostic to even the most straightforward of realities, such as gravity and flowing water, never mind the shifting complexities of southwesterly storm winds and sunshine and shadows where calypso orchids bloom and the way in which baby salmon hide.
Nevertheless, this afternoon I gave a nod and a bow to the imaginary lines of ownership. I can’t grow my food in a place surrounded by plant poisons that the people who own that property have every legal right to spray. From now on, the Smith River Memorial Garden will be only that—a memory.

Beyond Toxics seeks to express and explain the importance of our program work through literature and art as well as research and civic advocacy. We would be grateful to share your poetry and short prose pieces with others to inspire them to be more aware of environmental protection and health. Please consider giving us permission to share your work on our website, Facebook page, and in publications and as spoken word performance in our events. Send your work to: info@beyondtoxics.org. In the subject line indicate that you have sent a poetry or prose submission. Material received will be considered for sharing as part of Beyond Toxics’ effective work. 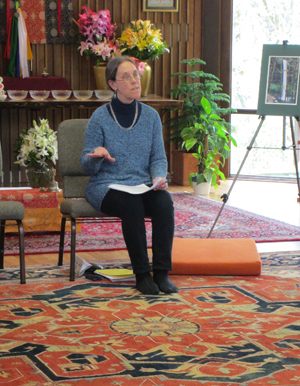 A founding member of Airlie Press, Carter McKenzie is the author of the chapbook Naming Departure (Traprock Books) and a full-length book of poetry Out of Refusal (Airlie Press). Her poetry has appeared in various journals and anthologies, and her essay “A Simple Instrument” is included in the anthology The Berkeley Poets Cooperative: A History of the Times, edited by Charles Entrekin. Through affiliation with Young Writers Association and  libraries, and through private arrangements, Carter teaches poetry workshops to students of all ages in Eugene, Oregon, and in the surrounding rural areas. She lives in the Cascade Foothills with her youngest daughter.

You that pass and raise your arm to me
before you hurt me, look at me well.
I am the heat of your home in the cold winter nights.
I am the friendly shade that you find
when walking under the August sun
And my fruits are appetizing freshness
That satisfy your thirst on the way.

—from “To the person who passes through this place,”a translation of “Ao Viandante” by Veiga Simões, dated 1914