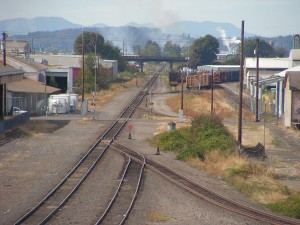 The West Eugene Industrial Corridor Environmental Health Project has its roots in OTA’s struggle to insist on the best available pollution controls for the building of the Seneca wood-burning energy production project.

Toxic Releases to Air and Water:

The City of Eugene established the Toxics Right to Know database in 1997. Data collection and annual reports are under the jurisdiction of the Eugene Fire Marshall’s office. The system collects toxics release information from businesses that emit more than 2,640 pounds of pollutants. Reports from 2005 – 2008 indicate that residents in West Eugene were exposed to 3,313,622 pounds of hazardous air pollutants (2009 data is not available). Ninety-four percent (94.4%) of all Eugene’s point source emissions are located in the West Eugene (97402) part of Eugene. The EPA Toxics Release Inventory database doesn’t collect data with mass balance reporting as required by the Eugene Fire Marshall’s report; however 195,220 pounds of air toxics were reported in the 2008 TRI for the 97402 zip code area.