Environmental Justice Bus Tour: A tour to the heart of our community 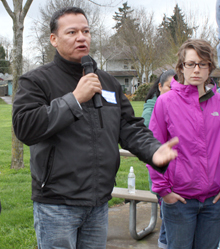 We were pleased to have been joined by Mayor Kitty Piercy, County Commissioner Rob Handy and City Councilors George Brown and Andrea Ortiz. We were also joined by a wide variety of government agency representatives, including Alana Henning, EPA and Ben Duncan, State of Oregon Environmental Justice Task Force (also representatives from Oregon Department of Agriculture, DEQ, LRAPA and City of Eugene's Human Rights Commission, Sustainability Commission and Planning Department and Bethel School). 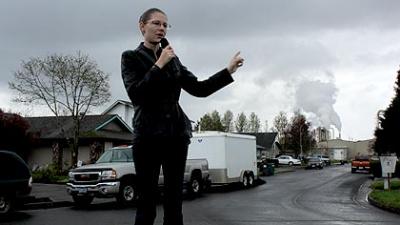 Resident Joanne Gross stands in front of her house while a nearby plant (Flakeboard) emits toxics into the air.

We would like to thank our wonderful volunteers who put in many hours of time to help us create a memorable event. 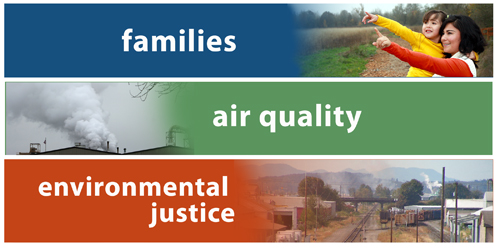 News about the event: 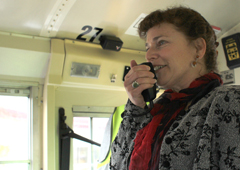 Special thanks for the community's support for this event, including:

According to the US EPA , fifty air and toxic release sites and two Superfund sites are listed within the nine square mile area of West Eugene. Residents of West Eugene face the release of over 437,000 pounds of airborne toxic chemical emissions from industrial sources alone. (Source: City of Eugene Toxics Inventory – 2010). Those who live in these neighborhoods, such as Bethel, Trainsong and River Road, face more frequent and intense exposures than other areas of Eugene.

As Lisa Jackson, the Administrator to the US Environmental Protection Agency, stated...

“…We must be sensitive to the burdens pollution has placed on vulnerable subpopulations, including children, the elderly, the poor and all others who are at particular risk to threats to health and the environment. We must seek their full partnership in the greater aim of identifying and eliminating the sources of pollution in their neighborhoods, schools, and homes.” 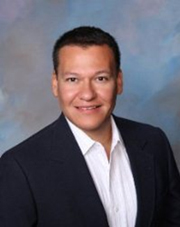 About the tour guide and guest presenter...
Luis Olmedo is the Executive Director of Comite Civico del Valle, an organization located in Imperial Valley whose mission focuses on addressing environmental health related problems in the farm worker community. Luis has an established reputation as a leading community activist and advises local, regional, and state programs on environmental health issues affecting Imperial County and Eastern Coachella Valley.

Ben Duncan, Board Chair for OPAL

Ben Duncan is a policy analyst with Multnomah County Health Department, Environmental Health Division and Board Chair of OPAL Environmental Justice Oregon which works for Environmental Justice in the Portland metro area. His work focuses on the relationship between health and the environment, through both policy and community based empowerment work, and touches all aspects of environmental health issues including food borne illness, vector control, air quality, toxics reduction, food policy and housing. Ben also works with the Diversity and Quality Team and the Health Equity Initiative which focus on equity and justice both within and outside the county. He is Chair of the Oregon Governor's Environmental Justice Task Force and serves on several other advisory boards and committees.