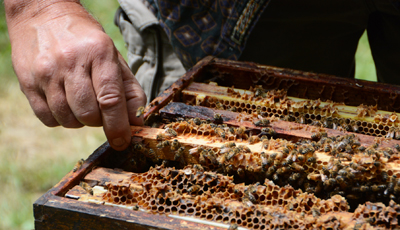 Philip Smith, of Blessed Bee, inspects one of his hives (Summer 2013). Photo by Kate Harnedy

Pollinators are essential for Oregon’s vibrant agricultural sector, supporting over $600 million of insect-pollinated crops grown by Oregon farmers each year. Their crops include small fruits such as blueberries, marionberries, loganberries and black raspberries, tree fruits such as apples, pears and cherries, as well as watermelon and seed for crimson clover, red clover, and alfalfa. All of this farm production depends heavily on the pollination services of both European honey bees and native pollinators such as bumble bees.

These bees also ensure that Oregon gardeners can produce fruit, vegetables and flowers. Furthermore, pollinators play a central role in maintaining a healthy environment. Pollinators help 85% of plants to reproduce and they are responsible for the abundant nuts, seeds, and fruit that feed wildlife, from birds to bears.

In Oregon, over a half dozen separate insecticide applications in the summers of 2013 and 2014 caused the death of nearly 100,000 bumble bees. An investigation by the Oregon Department of Agriculture implicated dinotefuran in two of the kills and a closely related pesticide, imidacloprid, in the others. These insecticides, along with clothianidin and thiamethoxam, are neonicotinoids, the most widely used group of insecticides in the world. They are highly toxic to honey bees, as well as many native pollinators, including bumble bees.

Compounding the risk, these four neonicotinoid insecticides are particularly long-lasting. They can persist in plants up to six years after a single application. They have been found in soil up to two years after an application. They remain in water for nearly seven years. That means they can continue to harm bees and other beneficial insects long after their initial use. Research by the American Bird Conservancy found that persistent neonicotinoids also negatively impact birds by upsetting the balance between birds and a primary food source, insects, and by poisoning the insects they do eat. Their 100-page report, “The Impact of the Nation’s Most Widely Used Insecticides on Birds,” reviews 200 studies on neonicotinoids including industry research obtained through the US Freedom of Information Act. The assessment concludes that the neonicotinoids are lethal to birds and to the aquatic systems on which they depend.

Please help us save Oregon's bees! Become a member of Beyond Toxics TODAY!

After you click on the green button (below), simply choose “Save Oregon's Bees” from the “I want my donation to be designated toward” drop-down option. We need and very much appreciate your support for this project!