“The violation and the fine that goes with it demonstrate that the neighborhood has been telling the truth about JH Baxter for decades (yet the community had been essentially ignored by local regulatory agency). JH Baxter is a bad neighborhood and has now been caught intentionally poisoning the Bethel and Trainsong areas of Eugene. This issue is one Beyond Toxics has been assiduously working on with the community!” – Lisa Arkin, Beyond Toxics Executive Director

See also, A Solution for Pollution (After dealing with the effects of neighborhood pollution for decades a local coalition investigates causes and solutions) by Taylor Perse, Eugene Weekly

These are a few of the stories of those who suffer exposure to air pollution from the J.H. Baxter plant in West Eugene. Most who submitted stories have asked not to be identified by name. | If you live near the J.H. Baxter plant and would like to share your story with us, please call us: 541-465-8860 or fill out the form on our web site.

Jenna moved to the neighborhood in July 2019 and lives only 5 or 6 blocks away from J.H. Baxter. The tar smells from the factory burn her nose and mouth and it’s especially hard on her because she wears a CPAP device to help her breathe at night. She reports that she has been wearing her CPAP for 10 years and has “never noticed smells like this ever before moving in to the neighborhood.” The smell is so bad it often wakes her up as early as 3 or 4 am.

Barb, who lives in the neighborhood talks about the problems she encounters:
“I can’t keep windows open at night in nice weather. I can’t enjoy being outside either. Noticed our shrubs and trees are suffering frome something and wonder if this is the cause. Lost several azalias and a decorative deciduous trees during the past year. Also, a few large rhodies have gotten smaller each year for several years.”

Christine, who lives a few blocks from the J.H. Baxter plant says she has trouble breathing and suffers from burning/irritated eyes, migraines/headaches, dizziness, coordination problems, involuntary muscle movements and tinnitus–all of which started soon after she moved into her house in March of 2019. She further says, “…the fatigue, neurological problems (problems with gait and coordination), and tinnitus — I have never had that before.”

Anabella lives about 8 minutes away and visits the nearby park. She reports trouble breathing, burning/irritated eyes and skin problems. She says, “I feel that with my health issues this has been the cause. I [have] been throwing up in the middle of the night as well as having night sweats. I been having high blood cells. I have had a bump on my lung, as well as swelling of my liver and spleen. I been having stomach issues, as well as brain fog and my nose and throat has been hurting.”

Sarah lives about 3 miles from the J.H. Baxter plant. She says she “experienced very strong chemical odor on Oct. 6, 2019,” and was “unable to be outside for more than 10 minutes [because] it was so overwhelming.” She is “concerned with exposure effects” and recalls “summoning my son and neighbor friend inside this day as they played ball for about 10 minutes with concern for their health.”

Dorothy, who recently moved less than 1 mile from the J.H. Baxter factory, reports frequent asthma flare ups and notices heavy fumes after rainfall. After one day in particular, she recalls, “I was unable to take a full breath in and was constantly wheezing and coughing.”

Juanita lives about a mile from the plant and notices the worst fumes at night. She has trouble breathing and suffers from burning/irritated eyes. She says, “JH Baxter releases the most noxious fumes in the middle of the night. When my husband leaves for work early in the morning, on more than one occasion, the smell has made him vomit.”

Sandra, who traveled near the J.H. Baxter plant, says, “When we first decided to move to Oregon, we thought we would like to live in Eugene, so my husband and I went there to look at homes. We looked at several houses and then I noticed that all the cars in the neighborhood had spots on them. I asked the broker what the spots were. He said the air was so bad in that area that it peeled the paint off the cars. We decided not to live in Eugene, as I have lung problems. We moved to the coast.”

Lucy, who lived a mere 5 blocks from the JH Baxter plant, has had “…intermittent trouble breathing, heart palpitations, anxiety, strange nerve irritation/sensations and hives.” She says, “It started in 2017 after I gave birth to my daughter. I thought maybe it was from all the post-partum hormones. I developed hives one day and they got worse and worse until I had hives covering my hands, feet and crevices. I had dinner-plate-sized hives on my thighs. I was seeing my primary care physician, neurologist, allergy specialist and eventually a psychiatrist. I started taking medication to control the hives and that worked. The doctors couldn’t find anything really wrong with me. I started to feel like I was crazy … I was having all these weird symptoms, and even though I couldn’t quite pin them down, I could feel it. I was prescribed medicine for anxiety and a mood disorder.” She continues, “We bought a house in Veneta and moved in August 2019. Within 6 weeks of moving, all of the symptoms had ceased and I am not taking any medications any longer. I feel completely normal again. I read an article about J.H Baxter a while back, after the move, and I am certain that is what was causing my symptoms.”

Geoffrey lives in the Santa Clara neighborhood and suffers from burning and irritated eyes.

“My wife and I moved to Eugene a little over a year ago. Neither one of us has ever had any allergies or respiratory problems and we came here from the Los Angeles area. Several times a week, around dinner time, our eyes start watering and itching and my wife gets a headache. Night time is extremely difficult. I cough up phlegm every ten minutes or so and can only sleep for short periods of time. If I take cough medicine I can sleep for two or thee hours between doses. My wife also coughs, but isn’t having as severe a problem as I am. This all started for us in early November during a stagnant air situation in Eugene that lasted over a week. I have been to my Internist and my ENT (ear, nose and throat) doctor several times since it started. They have both concluded that particulates in the air are the problem. We are, otherwise, in good health. I do not take any prescribed medication. When we go out of town for the day, it stops and we feel fine. As soon as we re-enter Eugene, it starts up again. We are about a mile from the Seneca wood processing operations and a few miles further from the J.H. Baxter operations. We have installed five separate air purification systems inside our house. They help immensely and make the house livable. The symptoms persist, but to a much lesser degree. If we try to go for a neighborhood walk with our dog, the symptoms once again magnify.”

Laura lives a mile and a half from J.H. Baxter and about a mile from the Kinder Morgan Eugene Terminal. She says she has trouble breathing and suffers from burning/irritated eyes, especially in the evenings and after business hours M-F and early in the morning. 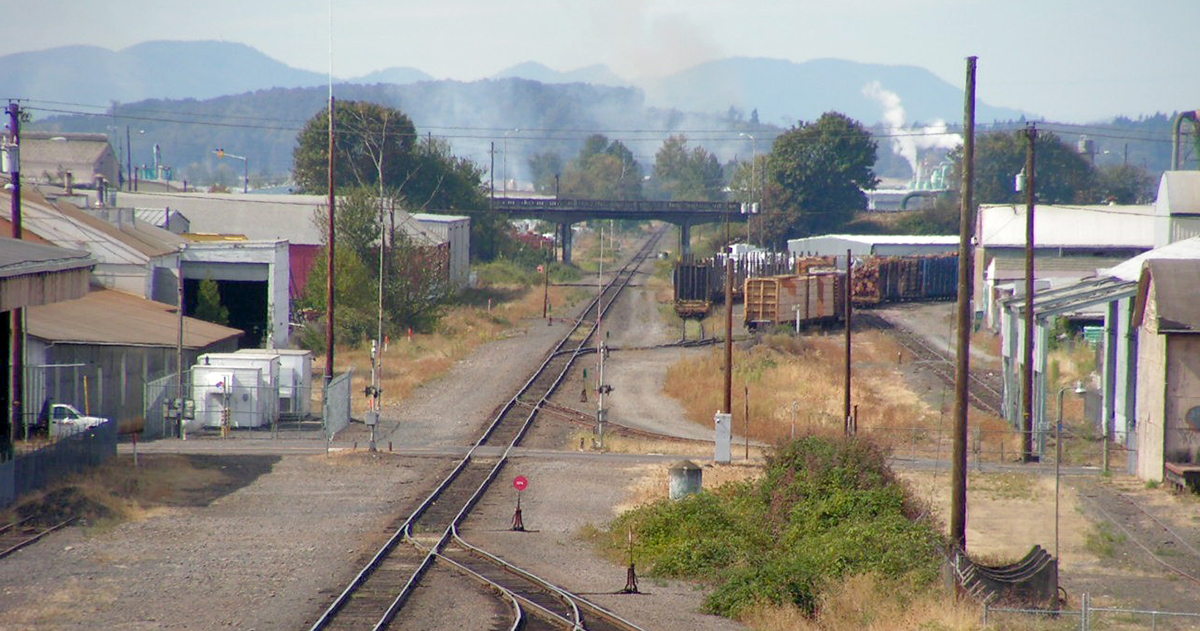 Laura says: “I am not going to give all the credit for terrible air pollution to J.H. Baxter because I think that there is more than one source of injury: the Kinder Morgan oil terminal and the railroad that transports it all along NW Expressway. There are evenings where the petrochemical smell is so thick that I become concerned about the vapors in the air reaching a flash point. Sometimes the smell is more like fuel oil than another terrible smell. The smells are in various concentrations but are generally worst in the early evening and early morning. Sometimes, catching the bus is difficult for me, an asthmatic, because of the smell. I catch the 55 bus at 6:50 am and return around 5 pm Monday through Friday. The smells are not limited to business days either.

I recently purchased a home along the fringe of the River Road neighborhood, apparently without enough due diligence and I am horribly sorry because of the smells and what they mean. Personally, I think the City, County and DEQ should be stepping up its inspections and establishing additional monitoring points. The City and County have designated too many parks around these two businesses to continue to turn a blind eye to the exposures.”