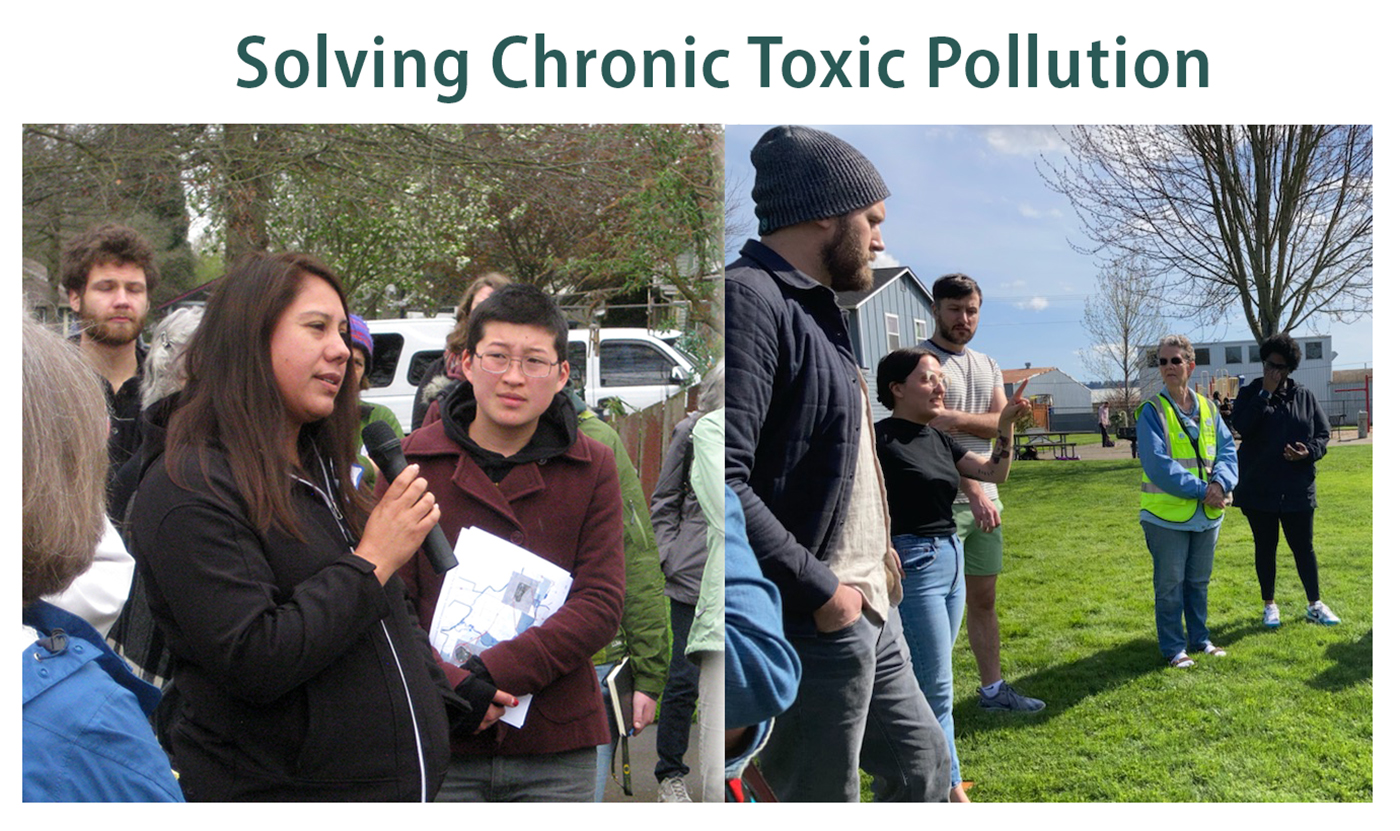 Neighborhoods in West Eugene have been exposed to a disproportionate burden of air, water and soil pollution for many decades. For example, the Oregon Dept of Environmental Quality heavily fined JH Baxter, a creosote chemical manufacturer, for multiple violations of their environmental permit. JH Baxter and other industrial polluters have exposed thousands of Eugene residents to toxic chemicals that are known to cause cancer and chronic diseases such as asthma.

Councilors Claire Syrett and Randy Groves held a community forum on March 29th, hosted by Beyond Toxics (see the video on YouTube). In that forum, community members discussed the Council’s plans and the councilors listened to community input and answered questions. Two key potential solutions were discussed to address the problem of chronic toxic pollution: Public Health Overlay Zones and Risk Bonds.

1) There have been historical mistakes made by local governments in their land use planning for West Eugene neighborhoods. These mistakes have resulted in placing unjust burdens on impacted communities causing harm to health and lowering property values.

2) Our City Council is taking action to prioritize public health and, with community involvement, are moving forward with solutions for West Eugene neighborhoods.

3) We now have strong recommendations to solve these problems.

WHAT TO DO ABOUT CHRONIC TOXICS POLLUTION IN EUGENE

The city does not now have a Public Health Overlay Zone that ensures the public and our environment are protected from industrial pollution. Our city councilors are committed to exploring this as a strong solution.

We need to adopt a Public Health Overlay Zone as a solution to protecting residential neighborhoods from industrial pollution. This solution is designed to ensure that future land development projects promote a healthy environment and improved quality of life for surrounding neighborhoods. The City of Eugene adopted a similar land use concept in 2017 when it annexed lands to add acres for industrial and manufacturing jobs in the Clear Lake Road area in West Eugene.

What will this do for Eugene communities?
The Public Health Overlay will uphold the community’s values around climate change, sustainability, health, local food systems, and conservation of natural resources. These new rules are designed to reduce pollution and improve public health for the local community going forward.

Risk Bonds are used to ensure that polluters take financial responsibility for the impacts of their toxic releases on surrounding neighborhoods and public infrastructure. A Risk Bond is a form of liability insurance. City councilors are considering adopting an ordinance requiring those industrial facilities that use fossil fuels and hazardous chemicals and that are deemed a substantial risk to the health and safety of the public and/or infrastructure to carry a Risk Bond.

Our communities deserve to know that chronic, repeat toxic polluters will be held accountable for the harm they are causing to our air and water quality. The City is exploring options to prioritize public health and livability over the current system that was designed by corporate polluters to benefit themselves. Rather than a slap on the wrist, chronic toxic polluters must face substantial fines and proportionate consequences for permit violations.

>> Contact your city councilors now to let them know you want action to protect public health. See the KEY TALKING POINTS (below)

Protect Your Health and Property

City Councilors need your support to take action against chronic toxic polluters! Hearing from the public gives them the strength to stand up to big polluters and their lawyers and lobbyists. Please take a moment to send a letter to the editor and write or call your city councilor and Mayor Vinis to tell them you support strong policies to prevent pollution. Here are some talking points to help you think about the issue.

Prioritize Our Health
The City should build public health protections into its land use decisions. Currently public health plays little to no role in what industries are permitted to build in Eugene.

Say NO to Bad Polluters
The City should use and strengthen its authority to deny applications or require amendments when new polluters ask for permits to operate in Eugene.

Emergency Planning
The City can require polluters that use toxic chemicals and flammable fuels to submit emergency management plans to show how they will prevent explosions, spills, fires and smoke in the case of a climate or environmental disaster.

Polluter Pays (and not the victim!)
The City must require polluters to carry Risk Bonds, otherwise known as liability insurance, in amounts that will cover property damage to surrounding neighborhoods in the event of off-site pollution, explosions, spills, fires and smoke.

Polluter Accountability
The City must ensure that polluters show proof of Risk Bonds on an annual basis - no policy lapses.

Equity in Decision Making
Low-income families and people of color are most vulnerable to the harm from pollution, which includes poor health and loss of property values. These families must be included in risk assessments and community decision-making.

DON'T Repeat the Mistakes of the Past
The City has made poor choices in the past in the name of "urban renewal," by splitting up neighborhoods with highways and truck corridors, by putting low-income housing across the street from big polluters, by destroying buildings that gave pride of place and were cherished gathering places for neighborhoods. Neighborhoods deserve better!

We will keep you appraised of progress in forthcoming e-alerts.
Sign up below for the Beyond Toxics e-alerts list to stay informed.