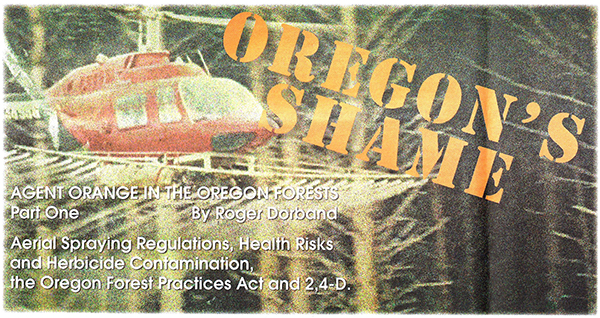 Read about what the DEQ is doing about protecting Oregon’s water from pesticide pollution. New rules have been proposed and Beyond Toxics has submitted comments. These comments have been endorsed by 5 other northwest environmental organizations.
2300A General Permit Public Comment (PDF) 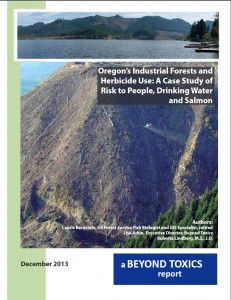 “Oregon’s Industrial Forests and Herbicide Use: A Case Study of Risk to People, Drinking Water and Salmon”

In 2010 Beyond Toxics published “Protecting Health in Your Community: A Guidebook for Organizing for Pesticide Reform” for wide distribution. This primer focuses on pesticide issues and is tailored toward Oregon residents. It was developed in response to the many inquiries we receive from small communities struggling to find a solution to pollution and poisoning from large-scale pesticide applications (e.g., forestry, agriculture, right-of-way, public property and public housing contracts). Read the primer Community Organizing Guide.

Testing for pesticides*
NOTE: Beyond Toxics cannot recommend one company over another, we are simply providing resources for consumers to investigate for themselves.

Glyphosate: #takethetest
Feed the World has set up the first ever validated glyphosate testing (LC/MS/MS) for the general public worldwide, which will be provided in the U.S. with the support of the Organic Consumers Association (OCA).

* If you know of other companies in Oregon that do this kind of testing, please contact me: info (at) beyondtoxics (dot) org and I will endeavor to add them. Thanks!