Why Oregon needs a law to reform pesticide policy NOW 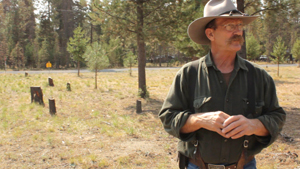 Surely, nobody wants to consume pesticides. But most people assume they can at least choose to avoid pesticides on their own property, or while they’re driving on a state highway, or walking with their kids in a state park. That’s what residents thought in La Pine, Oregon. They built family homes in a semi-rural area south of Bend noted for tall Ponderosa pines, mountain lakes and volcanic soils. But without their permission or consent, a government spray truck swept through the neighborhood spraying picloram, a restricted and highly toxic herbicide. Soon, their well water was poisoned, their great Ponderosas were dying and their children were suffering from persistent bloody noses, headaches and coughs.

Dan, one of the La Pine residents whose property tested positive for picloram called the Beyond Toxics office for help. “We must prevent this kind of recklessness from ever happening again. Endangering the general public is not acceptable at any time for any reason,” he told us.

And spraying is not confined to rural areas. A state employee spoke to me at a State Capitol event. She was exposed to an unknown “spider spray” in a State agency building. The intensity of the chemical residue caused her to become ill, forcing her to seek medical help and lose three days of work.

For these people–and all Oregonians, Beyond Toxics is taking action to establish a new state policy that would relegate pesticides as the “last resort” after other pest management options have been exhausted. Whether we are state employees, or park visitors, or citizens doing business on properties owned by the State of Oregon, we all have the right to assume we are not being poisoned.

Toward that end, Beyond Toxics has submitted a bill that will be voted on in the 2013 Legislative session. We are proud to announce that Lane County’s Senator Chris Edwards is leading the support in the Senate for our bill, Safe Public Places. And Representative Alyssa Keny-Guyer of Portland is championing the effort in the Oregon House of Representatives.

Beyond Toxics is known for its leadership and innovation in advancing the adoption of toxic-reduction programs that protect the environment and public health. It was our report exposing pesticide poisonings at public schools that led to the passage of Oregon’s 2009 School IPM law, perhaps the strongest in the nation. The State of Oregon should use pesticides as a last resort for all public places. If schools can do it, so can State government.

Pesticides are a public and environmental health problem, linked to tragic disease and environmental damage. Reducing the amount of toxics on public property will keep thousands of gallons of chemical runoff from contaminating Oregon’s people, its rivers, soils, and air. It’s the responsible option for our wildlife, our water, and ourselves.

Beyond Toxics will continue to work on your behalf. After all, this is the 50th Anniversary of the momentous book Silent Spring by Rachel Carson. Now is the time to call on our government to enter a new era of strong environmental health protections.

Please sign our Safe Public Places endorsement form and pass it along to friends, family and neighbors!

Please help continue this vital campaign by joining Beyond Toxics! 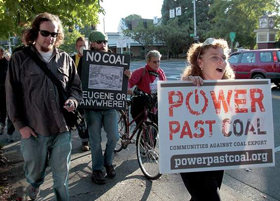 The summer and early fall was marked by fits and starts as the Eugene City Council debated a resolution put forward by Councilor Alan Zelenka to restrict the export of coal by train through Eugene. Throughout their delays, Beyond Toxics provided leadership and much needed information. We made headlines educating Eugeneans and others across the state about the health dangers of coal dust, dramatic increases in locomotive diesel emissions and the increased risk of train derailments. This included a July appearance by our Executive Director, Lisa Arkin, before the Eugene City Club. She presented her report, Environmental and Health Impacts of Coal Trains in Oregon to the bi-partisan and inquisitive crowd.

As fall approached and it looked like the city would finally address the issue, we reached out to membership and got many dozens of people to sign our online action pledge to contact their City Councilor to register their discontent with the threat of coal trains. As part of this hearings process, we organized a march and rally in front of the Eugene Public Library. Many of the protestors were on hand to witness the subsequent proceedings and give support to the anti-coal presenters who gave the Mayor and City Councilors brilliant testimony.

The next level of government, Lane County, for the time being, is considering a deeply flawed resolution supporting the bulk terminal and Coos Bay rail link specifically for coal transport. Despite tabling the motion just two minutes before public comment at their October 17 meeting (and suggesting that people simply leave), a remarkable showing of at least 30 people stayed on to exercise their right to testify. We thank them all for speaking on behalf of health, safety and a more reasoned energy future!

In the final vote on October 22nd the Eugene City Council decided (with a vote of 5-3) to support the resolution to restrict the export of coal by train through Eugene. We celebrate this win, one of the many we must achieve, in favor of more green-collar jobs and a reasonable and forward thinking national and regional energy policy. Eugene now joins 24 other cities and counties in the Northwest renouncing the folly of coal trans-shipment to the West coast for export to Asia. These statements of support serve to give us all hope for an end to the use of coal in this new century. The sooner, the better–for our planet and for humanity.

MORE about the Stop Coal in Oregon campaign.

Please help us continue our winning streak by joining Beyond Toxics!

Our advocacy for Environmental Justice at Beyond Toxics has gotten a boost from technology and community-based research. 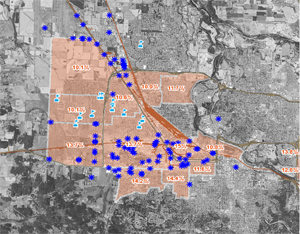 A GIS map of West Eugene shows a much higher concentration of industrial pollution sources in the 97402 zip code.

Using the Geospatial Information System (GIS) software, Beyond Toxics helps the public correlate the relationships between impacted communities and sources of pollution. By mapping out where schools, homes, and parks are located, for example, communities can see how close they are to the “toxic hot spots.” Mapping helps visualize how the same areas where children learn and play are also places where air pollution accumulates.

We are also exploring this technology to help rural communities, for example small towns in West Lane County that are impacted by aerial helicopter pesticide sprays. In these communities it is important to understand how pesticide sprays occur in places where children wait outside for school buses, drink well water and eat local fish caught in polluted streams.

GIS software is being put to use throughout communities around the world as a tool to identify key correlations between pollution sources and impacted communities. GIS enables Beyond Toxics to layer data sets of information that link sources of pollution to health. This is one way we “groundtruth” our environmental health advocacy projects.

Impacted communities may, at times, feel vulnerable and disempowered or perhaps even fatigued to go against “bigger” entities and decision-makers that are polluting their communities. Knowledge is power, however. By using GIS as a tool, communities are able to see the polluters impacting their families and identify it in ways that enables them to strategize more efficiently. It is a data tool. It is a community organizing tool. It is a tool of democractic empowerment.

Beyond Toxics partners with Centro LatinoAmericano to work on environmental justice issues. The Environmental Justice lens provides communities an opportunity to participate in environmental regulation and decision-making regardless of race, color, income level or national origin.

A BIG “thank you!” goes to Beyond Toxics interns, board members, and consultants, especially Jennifer McCauley, Laurie Bernstein, Bobbi Lindberg and Sara Heule, for their work and involvement in these GIS mapping projects.

Beyond Toxics in the News: 2012
By John Jordan-Cascade, Communications Manager
Coal, pesticide reform and environmental justice top the list of subjects covered by the news media in 2012

The raw numbers don’t really tell the whole story. It’s the quality of the coverage of our work that is the real success story behind the numbers.

Beyond Toxics made significant strides in improving Oregon’s awareness of what has become known as “chemical trespass,” or the involuntary spraying of people on their private property in rural Oregon. Two simultaneous anti-pesticide rallies in two rural counties in Oregon garnered excellent coverage in early February.

We also received unprecedented print and radio coverage of a unique series of events in mid-April around our Environmental Justice bus tour of West Eugene. In September, that same event inspired more in-depth coverage in the Eugene Weekly, featuring a striking and inspiring cover photo of Beyond Toxics staff person, Alison Guzman. 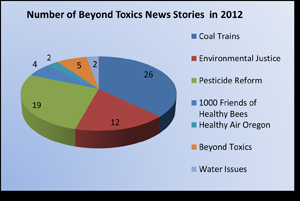 Beyond Toxics played (and continues to play) a key leadership role in rallying opposition to corporate plans to transport Powder River Basin coal through several ports in the Northwest (including the port of Coos Bay) for export to Asia. Beyond Toxics staff was quite busy in 2012 working to warn of the health and economic threats of these developments. The presentations, editorials, blogs, marches and rallies, a Eugene Celebration parade entry, testimony before local government and visits to our Congressional representatives, earned print media and radio interviews have all made a strong impact in Lane County and beyond. All our work, in collaboration with other coalition members, led finally to the passage of a City of Eugene resolution advising against the export of coal by train through Eugene and calling for a comprehensive environmental impact statement. Stay tuned in 2013 for more success stories!

The Fall 2012 Membership Drive is in full swing! Now is a great time to review how, working together in 2012, we have accomplished so much!

Please join us in welcoming a new Beyond Toxics Board Member!

A native Texan, Carlos is a descendant of the original Spanish colonists from the mid 1600′s. After retiring from electrical contracting in 1999, Carlos became involved in community service and neighborhood issues. He is co-chair of his neighborhood association and their representative to the Neighborhood Leaders Council, is a board member of Eugene Neighbors, Inc., and serves as an active advisor to several other boards. He volunteers with Autism Rocks, is an advocate for disability access, and is an avid recycler. He enjoys hiking, sailing, Frisbee, photography, wood working, the arts, and treasure hunting at estate sales and in dumpsters. 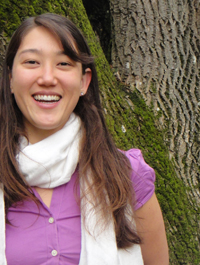 Sara Heule
Sara has been interning with Beyond Toxics since September 2012 and is currently working on our Safe Public Places Campaign project by helping us coordinate and implement valuable information on our GIS software! Thank you, Sara for being awesome and putting your brain to work for a Clean and Just Oregon! 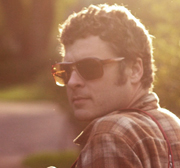 Douglas McGowan
Douglas escaped from Los Angeles to the Eugene area in late 2011. He runs a reissue label, Yoga Records, and wrote Nature of the Beast: A Graphic Novel, about an interspecies gladiator tournament. Douglas has been an ongoing and valued contributor of photographs and video clips for our recent pesticide reform work and the Environmental Justice Bus Tour in Eugene.

Join us at this year’s Open House to see the premiere of Douglas’ video about the tragic 2010 dousing of a rural community in Klamath County: December 12th at the Beyond Toxics office in Eugene: 1192 Lawrence St.

Yes, please sign me up for future e-Newsletters and Action Alerts!

Won’t you join us in imagining, and working for, a world Beyond Toxics?

OTA is a 501(c)(3) non-profit organization and all contributions are fully tax-deductible. Please consider giving a gift of a Beyond Toxics membership to a friend or family member!