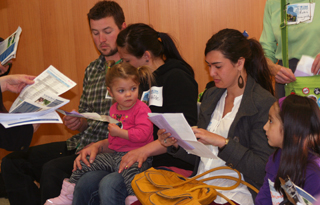 Jennah Stillman, a University of Oregon student, joined 30 other volunteers for our Lobby Day event in Salem. We spoke with 40 Senators and Representatives about the issue of pesticides and the benefits of the Safe Public Places Act.

This is a great time to be engaged in protecting the environment ... WE'RE WINNING!

Your membership and donations make it possible for us to engage the public for the protection of communities and their environmental health. We cannot do it without your help! Please join us and DONATE TODAY or renew your membership, to help us in our work towards an equitable, protected Oregon.

This Spring, there are MANY reasons to be hopeful! Protecting what you cherish is possible. And Beyond Toxics remains your vigilant advocate.

Please know that your gift of $50, $100, or the amount that is right for you, will make a tangible difference in our 2013 projects:

1. Passing a new state law that establishes “pesticides as a last resort” when dealing with weeds and pests on public property. --> DONE!
2. Challenging industrial polluters whose toxic emissions harm the health of Oregon communities.
3. Working with the City of Eugene to expand the number of Pesticide-free City parks.
4. Exploring new initiatives for providing healthy gardens in under served communities in West Eugene.
4. Dramatically reducing the threat of pesticides to our cherished bees.

What is your part in this important work? We look to you, our members, donors and supporters, to join us in our next steps to remain ever vigilant for your health and the environment you cherish. 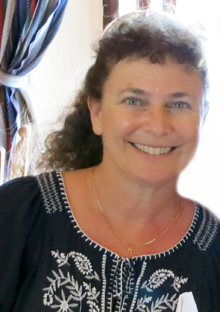 Whether you read our blog, join us on an Environmental Justice Bus Tour, come to one of our events, sign our petition for healthy bees, volunteer or make an annual donation, with your help, I know that we can build the momentum to succeed in this vitally important vision: an Oregon beyond toxics!

Please check out our many recent accomplishments and projects below. Your donation makes these environmental health victories possible.

In gratitude for your support and in harmony with your vision,

Fighting for public spaces that are free of dangerous pesticides. In keeping with Oregon’s existing policies and programs to reduce threats to Oregon’s natural resources, HB 3364, the bill we wrote and guided through the halls of the Capitol, won passage in the Senate on May 28th and was signed into law by Governor Kitzhaber on June 4th!

The outcome of HB 3364 will be a coordinated and collaborative approach to implement IPM for pest management-related issues using the latest methods and approaches to IPM. The bill also requires state agencies to prioritize safety and protections for children, the elderly, fish, wildlife and water quality from the use of pesticides.

"The passage of the bill shows strong bi-partisan support for better management of both pests and pest control strategies, as well as tracking and measuring the effectiveness of pesticides on public land,” said Lisa Arkin, Executive Director of Beyond Toxics. “IPM programs consistently reduce pesticides while simultaneously solving pest problems.” (See the bill's endorsers)

Coal and Your Health. When Big Coal proposed to haul sooty, hazardous train cars loaded with coal through Oregon, Beyond Toxics responded with a Public Records Request to the Port of Coos Bay to bring to light the secret negotiations to build an export terminal.

We made the first local speech against coal at the Eugene City Club, and organized the first protest rallies. Citizens gathered at the Eugene Rail Yard, paraded in the Eugene Celebration, and rallied at the downtown library to make their will known. Those actions helped convince the City Council to oppose coal trains and now, thanks to your support and a year of active organizing, the threat of coal trains in Lane County has vanished!

Pesticides and Innovative Research. When a federal investigation revealed that residents of West Lane County—including young children—had dangerous pesticides in their bodies, Beyond Toxics immediately published editorials, organized the successful Triangle Lake No Spray highway project, held rallies, and met with government officials to get an action plan in place. One of the many results of those efforts is a first-of-its-kind GIS mapping project that will display the impact of forestry pesticides on streams where salmon live. Combining concrete action with careful environmental research is how we are changing policy at the highest levels of State government. 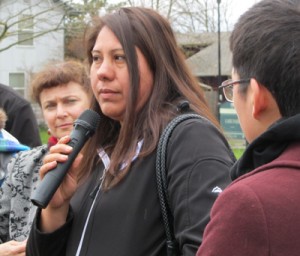 Industrial Air Pollution and Our Community. When mothers complained about foul air hurting their children’s lungs in West Eugene, Beyond Toxics brought elected officials, the EPA, and state agencies into the neighborhoods to hear directly from parents and witness the problems first hand. As a result, Union Pacific Railroad agreed to carry out hazardous waste clean-up, and local government reversed plans to put new housing and schools across the street from heavy industrial polluters. These are real results that improve health in our communities. 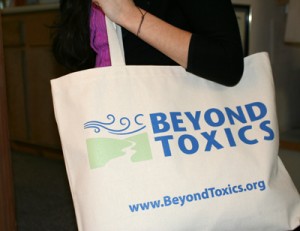 If you sign up for a new membership or to renew your membership at the $60 level before the end of May, you'll get a FREE durable organic cotton tote bag (Made in USA!)*

Interested in our Safe Public Places project? Designate your donation for that great program when you join! From the "Program Designation" option near the top of the page, simply choose the "Safe Public Places" by clicking on the down arrow.

(*For the first 50 people who sign up for membership online.)

We are now proud members of EarthShare! With EarthShare, you can donate at work with simple payroll deduction contributions. Your employer may even match your gift, increasing the impact of your investment.  For more information, check with your Human Resources manager. If you do not have a giving campaign at work, please contact them, and we can meet with decision-makers at your company.