Tribal Elders and Rally Speakers To Our Dr. Governor – Protect Us from Pesticide Drift! 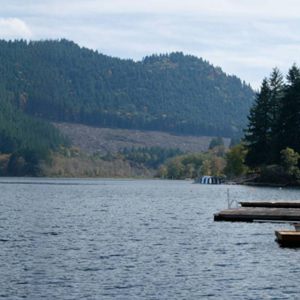 A nearby neighbor who has a house on the shores of Triangle Lake heard the loudspeaker from the Chemical Witness Rally, and wandered over to see what was going on. What she found was an open microphone at the lakeshore park, a place and time for people to speak to their personal experience about being harmed by pesticides. She said she knew nothing about the growing movement to stop aerial pesticide sprays on the forestlands of her own community, nevertheless she stepped up to the microphone.

What this neighbor said was poignant. To paraphrase: At some point in my life, I became highly sensitive to scents, chemicals, and many common air pollutants. My employer had to create a “bubble-like” environment for me, just so that I could function at work. It is torture to live with these severe reactions to chemicals. I can really appreciate and support what you folks are talking about today. Exposures like this make so many people ill.

The energy of water and sun sparkled down on the twin-planned events at Triangle Lake and Lake Selmac. Over 140 people gathered from many different communities to give witness to an unacceptable situation – pesticides sprayed from helicopters all over Oregon’s beautiful coastal mountain range. Vapors get carried onto private property by wind currents, fog and droplet drift. Rural communities want protection from the state government.

I was deeply moved by the heartfelt testimony. To frame the notion of chemical witnessing, both rallies started with an invocation from two prominent tribal elders – Grandma Agnes Pilgrim, one of the original Takilma elders of the Confederated Tribes of Siletz, and Esther Stutzman, a highly regarded Kalapuya and Coos Elder. The two women represented tribes who have fished, hunted, gathered and sustained their traditions through their long-standing and profoundly deep connection with the land. Esther Stutzman reminded us that the members of her tribe have seen the harm caused by pesticides to the native salmon. She told how native women can no longer gather plants and materials from the land to make baskets because of the poisons. Esther spoke strongly: this is the right time to bring our shared concerns to action, to stop the poisoning of the land and the people.

Audrey Moore, the leader of Precious Dirt in Selma, reflected on the electrifying gathering on the shores of Lake Selmac: “So many willing and wanting to share their stories, each unique and yet the same, all knowing this insanity must end, and that we now demand our Human Rights. We expect as much from our Governor, and our State.”