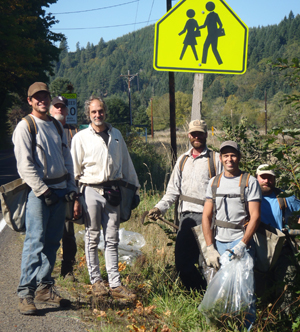 2010 was a banner year for Beyond Toxics’ grassroots project, the Oregon Pesticide Action Working Group (OPAWG), a network of Oregonians representing seven rural counties. OPAWG builds leadership for pesticide reform by assisting with direct action campaigns – mostly for small towns and rural communities who are fighting to stop pesticide drift and run-off. Beyond Toxics believes that developing a statewide voice and supporting these grassroots efforts is critical to advancing change.

OPAWG has been the catalyst for many successful projects. For example, in September 2010, ODOT agreed to a ground-breaking partnership with Beyond Toxics and rural neighbors to remove invasive weeds without the use of pesticides along a 12-mile stretch of Highway 36 in the Siuslaw Watershed. They also agreed to reduce pesticide use by 60% along the other 44 miles of this scenic highway. We also helped communities take on successful pesticide reduction projects in Walton, Yachats, Ashland, Williams, Eugene, Waldport and other places. Furthermore, Beyond Toxics traveled throughout the Northwest region to present data and make recommendations in front of key agencies that have the ability to set policy to reduce pesticide use.

Back to Pesticide Reform home page

Now you can designate that your donation go directly to our work for pesticide reform when you join! After clicking on the green button (below)...from the “Program Designation” drop-down option, simply choose "Pesticide Reform."