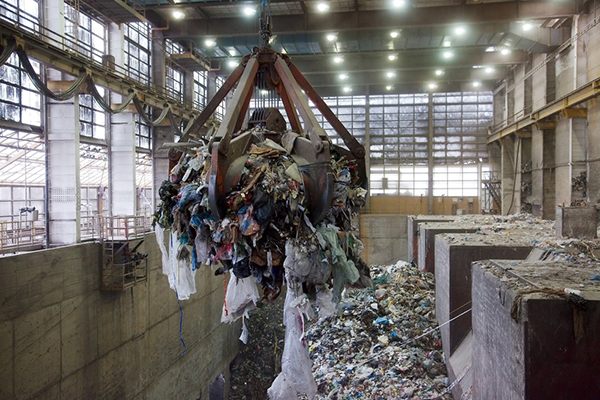 Big pile of garbage at a waste processing plant

Have you noticed the red and white emissions stack to the east of I-5, just north of Salem? That is the Covanta Marion Municipal Solid Waste Incinerator. Covanta is a large corporation owning Oregon’s single trash incinerator.

If you care about climate and resiliency, then you’ll want to know about the poison pill Covanta has inserted into this year’s legislative deliberations on the Clean Energy Jobs bill and renewable energy programs.

A number of organizations are working together with Beyond Toxics to warn the public and legislators that Covanta is up to trashy tricks to undermine the goals of the Oregon Climate Action Policy, commonly known as the Clean Energy Jobs bill.

Covanta is asking state lawmakers to certify that their company is eligible for tax credits reserved for renewable energy projects, retroactively back to 2011 and into the endless future. That sneaky maneuver has made it into the form of a bill: SB 451, sponsored by Senator Lee Beyer “at the request of Covanta.” Senator Beyer claims he’s promoting SB 451 because of a “promise” made 10 years ago by former Senator Chris Edwards, who now works as an industry lobbyist. Why should Senator Beyer be bound by a decades-old “promise” from someone else who, at the time, was not aware of today’s climate science and the urgency of reducing CO2? It is nonsense to give away tax credits that should be reserved for truly renewable energy companies, such as those creating energy via solar, wind and thermal.

Covanta is also “fired up” to get an exemption from the carbon reduction requirements of the Clean Energy Jobs bill. HB 2020 Section 10 (2) gives Covanta a free pass from having to pay into the cap-and-trade program and reduce their carbon emissions.

The problem for Covanta is that it is one of the largest emitters of carbon dioxide in the state of Oregon! According to the Oregon DEQ, Covanta is the 20th largest source of CO2 emissions among industrial sources with air quality permits in the state. The trash Covanta burns, and the pollution released from all that burning, generated 160,843 metric tons of carbon dioxide equivalents in 2017. Burning trash is neither clean nor renewable, especially because Covanta burns a lot of plastic. Plastic is made from fossil fuels.

In other words, by burning plastics, Covanta’s “renewable energy” plant is just more of the daily grind of extracting fossil fuels to create throw-away items that then pollute our bodies, wildlife, oceans, air and lands.

Worse yet, a lot of the plastic Covanta burns is hazardous medical waste imported from other states into Oregon. Covanta has contracts now and is seeking more contracts to haul some other state’s trash to burn in Oregon, releasing pollution into our skies!

The trashy, ashy fall-out is dispersing toxic chemicals into the backyards of vulnerable communities in Woodburn and Northeast Salem. According to the US EPA, the area within a 7-mile radius of where Covanta sends air pollutants into neighborhoods ranked in the 88th percentile for cancer and respiratory risks (using National Air Toxics Assessment data) and 83rd percentile for minority, low-income and linguistically-isolated compared to other areas in Oregon. This doesn’t mean the Covanta incinerator is entirely to blame for the excessive burdens of cancer and respiratory disease, but it is making a sizable contribution to poor air quality that harms local and vulnerable communities. This makes Covanta an environmental justice problem.

To make the same amount of energy as a coal power plant, trash incinerators release more DIOXIN, more CO2, and more CARBON MONOXIDE, NITROGEN OXIDES, and SULFUR DIOXIDES. According to their Oregon air pollution permit, Covanta also emits approximately 15 tons of HYDROGEN CHLORIDE annually across the last decade. HYDROGEN CHLORIDE is a corrosive air pollutant that results in acid rain and is a respiratory irritant. Incineration of plastics, such as the PVC in hospital waste, results in releases of hydrogen chloride.

As sad as the picture I’ve painted is, there is something you can do about this situation today! You can help keep municipal solid waste incineration OUT of Oregon’s renewable energy portfolio and IN the Carbon Cap-and-Trade Program.

HB 2020, the Clean Energy Jobs bill, is being amended this week and your involvement is time-sensitive! Please send an email to the Joint Carbon Reduction Committee at jccr.exhibits@oregonlegislature.gov TODAY! Urge them to delete Section 10 (2)(b) of the bill exempting municipal waste incineration and let them know that Oregon’s only solid waste incinerator--the 20th largest emitter of CO2--must be included in the carbon cap. Covanta must be held accountable for reducing its greenhouse gas emissions like other big polluters. Then tackle SB 451, the bill that would let Covanta cash in on a decade’s old “promise” to qualify them as renewable energy. Send your next email to the Senate Environmental and Natural Resources Committee before March 11 at senr.exhibits@oregonlegislature.gov. This email address will send your message to all the members of that committee! Tell these legislators that burning other people’s plastics and trash is neither clean nor renewable. Let them know that Oregonians prefer to uphold our obligations for a healthy planet for future generations rather than keep baseless, old promises from a former legislator-turned-lobbyist.

Thank you for taking action to keep a promise to the next generation. We must NOT remain silent. I’m counting on you to share with me the responsibility of solving a climate crisis capable of destabilizing entire eco-systems and devastating our communities. Each action you take brings us closer to sane and sensible solutions we can be proud to pass on to future generations of Oregonians.