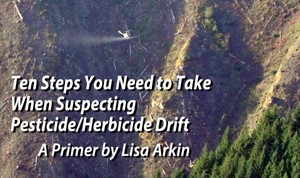 BELOW…Whistleblower video captures helicopter spraying weed killers on workers: April 26, 2015
(Published on May 21, 2015 on the Oregonian’s YouTube channel)
Darryl Ivy, a truck driver for Applebee Aviation, repeatedly took shelter in his truck to avoid being sprayed with weed killers from a helicopter. This video is one of more than 200 he shot with his phone. – Read the May 20, 2015 Oregonian article, “Whistleblower videos reveal helicopter spraying workers with weed killers”

This Is Our Watershed (5:57), a short film about forestry pesticide issues in the Rockaway Beach watershed on Oregon’s coast. 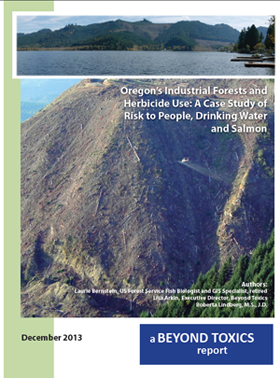 “Oregon’s Industrial Forests and Herbicide Use: A Case Study of Risk to People, Drinking Water and Salmon”

Lisa Arkin’s Letter to the Editor in the Dec. 15, 2014 edition of the Eugene Register-Guard: “Strengthen spray protections”

Key 2015 articles related to to poisoning of forest workers…

These crappy cell-phone videos could save people from getting weed killer sprayed on them
by Daniel Rivero, Fusion

3) 8 things you should know about helicopter spraying of weed killers on Oregon timberlands by Rob Davis, Oregonian – Third article in a series written by Rob Davis, The Oregonian, about the problem of aerial herbicide sprays used in industrial forestry practices.

Testing for pesticides*
NOTE: Beyond Toxics cannot recommend one company over another, we are simply providing resources for consumers to investigate for themselves.

Glyphosate: #takethetest
Feed the World has set up the first ever validated glyphosate testing (LC/MS/MS) for the general public worldwide, which will be provided in the U.S. with the support of the Organic Consumers Association (OCA).

* If you know of other companies in Oregon that do this kind of testing, please contact me: info (at) beyondtoxics (dot) org and I will endeavor to add them. Thanks!

“Something is afoot in our local forests, and I’m convinced that the epidemic of hoof disease currently ravaging the elk population surrounding Mount St. Helens is only the alarm.”