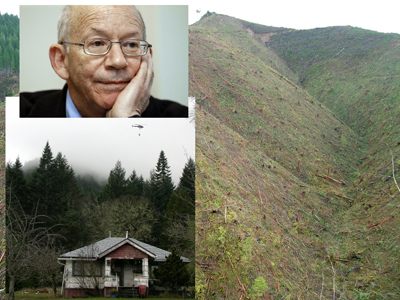 Over the past few months The Register-Guard has held a back-and-forth debate about Oregon Rep. Peter DeFazio’s plan to increase logging in Oregon’s federal forests.

What’s at stake? Nothing less than the future of Oregon’s clean-flowing drinking water.

There is also growing awareness about the issue of rural community health and exposure to forestry chemicals in air and domestic water.

Polling by the Pew Research Center consistently shows that clean water is what matters most to Oregonians. That’s one reason there is increasing alarm about a bill introduced by Rep. DeFazio to increase intensive logging on national forest lands.

DeFazio excused the failure of his plan to include federal environmental laws, saying water quality protections “would have to come from Salem.” He meant that state officials would have to fix the Oregon Forest Practices Act. And he is right!  But we could certainly use the Congressman’s support to modernize Oregon’s obsolete laws.

Beyond Toxics is working with other Oregon groups dedicated to protecting drinking water to bring the Oregon Forest Practices Act into alignment with current science, especially the science on pesticide drift.

Oregon is going backwards, away from good science. Any state plan that exports its politicized, obsolescent policies onto national forests is unacceptable.