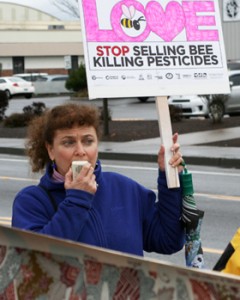 It started eighteen months ago, when a group of passionate and dedicated bee keepers came to the Beyond Toxics office to talk with us about the bees. They were well informed and brought published studies revealing the role pesticides play in the demise of honey bee colonies.

What a true grassroots group does is listen to those who are most impacted by toxic chemicals, evaluate the issue and take action. And so started the Bee Health and Pesticides movement in Oregon. I want to thank members of the Oregon Sustainable Beekeepers for alerting us.

We now have two significant wins that set new precedents for protecting bees.

On February 26, at the request of Beyond Toxics and neighborhood leaders, Eugene’s City Council unanimously passed a Council Resolution, “Enhancing Current Integrated Pest Management in Parks,” which bans the use of neonicotinoid pesticides on all city property. According to bee advocates around the nation, Eugene is the first city to ban these persistent pesticides. Let’s just stop promoting chemicals that are lethal to bees, accumulate within trees, flowers and hives, and are highly bio-toxic to amphibians and birds in wetlands.

Only a week earlier the Oregon Legislature passed a new law heralding the start of meaningful bee protections in our state. The law requires anyone applying for a pesticide license to take a course on pollinators and pesticides and pass the exam. HB 4139 also requires the Governor to establish a Task Force directed to continue the research on bee health and pesticides for legislative action in 2015.

Take note! The vote in both the House and the Senate was nearly unanimous. Strong bi-partisan support says a lot for the level of concern about bee survival. True, the legislation fell short of the original bill that would have restricted neonicotinoids, but considering the lack of action by the EPA and other states, Oregon has stepped up the pace for bee protection. 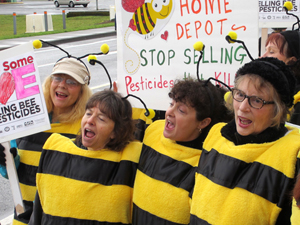 Eugene’s ban on neonics sets the bar for other cities and states to take action to guard against a crisis in pollinator survival that could impact 30-70% of all food production. Resolution 5101 also includes clear goals around children’s health and seeks to expand the current Pesticide-Free Parks program from ten parks to, potentially, all 40 parks. 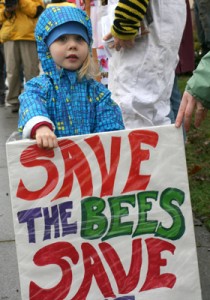 Oregon’s first, but not last, bee protection laws set forth precautionary policies that can, and should, motivate other local and state governments. It is a testament to Oregon’s values on protecting the health of the natural environment that these two laws were adopted without bi-partisan controversy.

For those who would like to see loads of lovely bee photos, we invite you to visit this page showing the winners of our Aug. 2013 photo contest, “Imaging A World Beyond Toxics.”

If you like our work to help save bees, please JOIN US today!