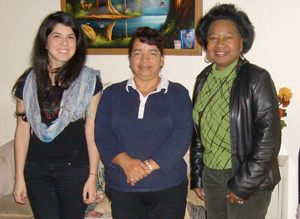 Alison stands next to Josefina, one of the Madres group members, and Sheryl Stohs, of the EPA region 10 Environmental Justice Program 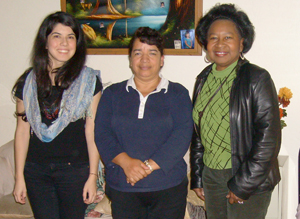 Alison stands next to Josefina Cano, one of the Madres group members, and Sheryl Stohs, of the EPA region 10 Environmental Justice Program

To be honest, I felt like an outsider when we first formed the Mothers for Health groups. After about five meetings I now really feel like one of the women of the Madres para la Salud community. It quickly dawned on me that relating to them was easier than I thought, since they reminded me of my own mother (who is Latina also and from Paraguay- a country in the heart of South America).

I think for many community organizers, the initial phases of reaching out to new people can be tricky. It is quite easy to fall into the trap of perceiving oneself as an outsider and in turn, being perceived by the group as an outsider. Yet, once you find common ground by relating as a person and not just the issues- whether it be language, culture, personal experiences- it becomes easier to merge as a member of the group.

Focusing on the bonds helps. I think one of the bonds that have emerged between myself and the Latina mothers is that to a certain extent, I am representing the kind of woman their daughters could be someday: Latina, educated in a US university, speaks English with an American accent, bi-cultural and bi-lingual, and with more Western traditions than their mothers (not necessarily a good or bad thing, just a fact). I believe this bond provides hope in the sense that the mothers wish every possible positive opportunity for their daughters in America- including living and growing up in a safe environment free from disproportionate environmental health risks. 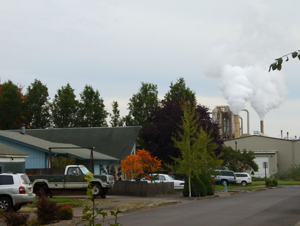 The Bethel area, a Northwest Eugene working class neighborhood, is next door to many polluting smokestackes like this one.

Madres para la Salud met again last Friday. Though it was a small turnout (as it always is when it comes to cold, Friday evenings in Eugene), I felt it was a great outcome. Initially I began working with the mothers in the idea that I would be providing them with new information and knowledge about environmental health and toxics, but I quickly learned that the learning process is quite the opposite of the way I thought. I’ve learned that the topics and goals must come from the mothers themselves to truly motivate them! I can’t help but ask community-participatory questions like: What are they interested in learning? Why? How does it fit into their daily lives? Will this be of use to them? What information can I bring to them next time we meet? Every meeting is a fresh new beginning with new concepts and ideas to discuss and meanwhile, I hope the Madres para la Salud group helps raise the bar on what it means to educate ourselves on toxic exposures and to determine what actions we can take to protect our health and the health of future generations.