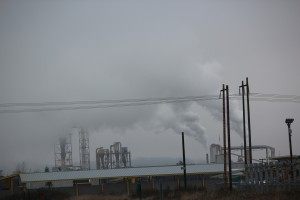 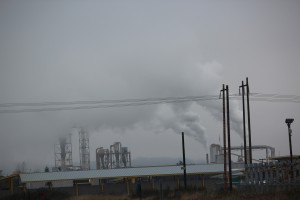 Sometimes when I think about our Environmental Justice project, I think about the communities we are working with - West Eugene. And then I think to myself, is it really only West Eugene we are speaking about here? I mean, if you think about it, air certainly doesn’t stay within neighborhood boundaries. Air particulates don’t say to one another “Oh, we’d better stay here.” And yet, people tend to think they are safe if they don’t directly smell, see or experience air pollution.  Perhaps they feel “Well, I don’t live in West Eugene. Why should I care?”

Say for instance you don’t live in West Eugene and you read the story in the paper about how your fellow Eugeneans are suffering from polluted air from train idling or industrial pollution. You take a sniff, and think, “I don’t live there.” And you move on to the sports section.

Or, let’s say you do live in West Eugene. You get days when it is just unbearable to go outside, open your windows, ride a bike or take a walk. But you have no choice because you’ve invested everything in your home and can’t afford to move to a different neighborhood.  And your children probably love their local school, you like your local church and your neighborhood association, and you bought your home with high hopes for a better life.  From what I learned from some West Eugene residents, underlying a sense of community is also a sense of being stuck without a way to change things (think about train idling!). That can feel frustrating.

The same goes with other environmental justice issues, such as wage theft in the Latino immigration community. When an undocumented worker for instance is not getting paid, it not only affects their family, but the state as well. We learned from Ramon Ramirez of PCUN last week that over 8000 wage claims were filed with Oregon's state labor bureau, totaling $24.5 million in wage theft. According to a study by the Perryman Group, if all undocumented immigrants left the state, Oregon would lose over $3,000,000,000 in revenue from their purchasing power.

Air pollution issues aren’t as concrete as wage theft. However, it has become obvious that disproportionate exposures to air toxics also have a ripple effect through our community. We, as a community united in working for a sustainable and healthy Eugene, could benefit from taking steps to reduce how air pollution harms not only nearby neighbors but everyone in our entire Eugene airshed. We can learn a lot from Northwest Portland Activists such as Neighbors for Clean Air who hammered out a "good neighbor" agreement with ESCO to reduce pollution from the company's foundries by an estimated 20 percent.  So let’s figure out a way to work together to help out our West Eugene community.  Just because we can’t see it or smell it doesn’t mean that it is not there.