Today, the announcement was made that the Oregon Legislature will take up a bill to address forestry chemical use.

Two courageous Oregon legislators, and seven other co-sponsors, filed a bill to protect the health of rural Oregonians living near industrial forests and farm land. When I first read the text of SB 613, the Public Health and Water Resources Protection Act, my eyes started to tear up. I thought of the heartbreaking journey that pesticide drift victims have traveled to arrive at this moment.

How deeply moving it is to see their concerns addressed in levelheaded, rational, and solution focused legislation.

Then I had a good laugh when I read the comments from opponents of the bill in today’s media coverage! According to a news report on OPB, “Timber industry leaders say federal and state laws already provide enough protection, and that the bill is the result of a perception problem.” Really? A “perception problem?”

Since when is it merely a “problem of perception” when an entire community suffers from repeatedly coughing up blood, vomiting, incessant and unstoppable nose bleeds, blurry vision and neurological problems after a forestry herbicide spray? 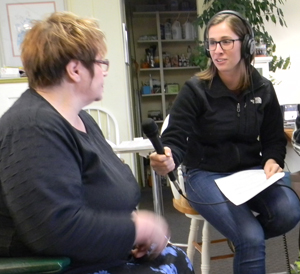 This last weekend a group of eighteen University of Oregon students on a research field trip interviewed Donna, a woman who lives on the Oregon coast. We all cried when she told us that after a helicopter sprayed her while she was gardening in her yard, she became so ill that she couldn’t move from her bed. She remained bed-stricken for nearly a week and could not go to her brother in Eugene. He had called for Donna to come to him and ended up dying alone in his home, with no sister beside him. She is heartbroken at the memory.

Since when is it a “problem of perception” when many people in nearly a dozen different Oregon counties report the same ailments and the same fear of the sound of the helicopter appearing unannounced? Is it a “perception problem” when a rural family’s budget is blown because they have to drive to town to buy bottled water, instead of drinking from their own spring or stream--for which they have water rights? 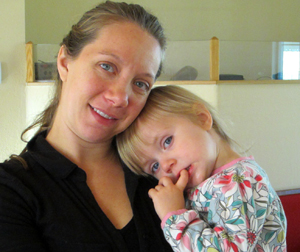 Lily Hansen and her daughter

Nonetheless, corporate lobbyists insist that it is okay to spray in coastal mountains where rural communities and the best salmon habitat are found. What is their reason for defending outdated state forestry laws? It must be their fear that if Oregon adopts the same best management requirements as other states, the timber industry won’t be able to use Oregon as their “demonstration project” to defend the last of the archaic chemical use statutes. 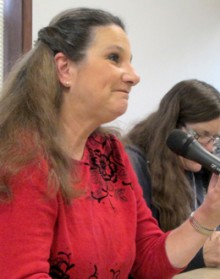 Kathryn Rickard, a Cedar Valley resident whose family suffers ongoing medical problems since being sprayed in 2013, spoke to bill sponsor Senator Dembrow by phone today, and told him, “After the way state agencies treated my community during their pesticide investigation, I lost faith and trust in my government. This bill restores my faith by showing me that legislative leaders want what is right for the people of Oregon.”

I think that Kathryn expresses the hope that Oregonians are beginning to feel when they learn about the goal of SB 613. This bill champions normal, sensible public health actions that people in other states are entitled to: timely notification prior to an aerial spray, accuracy in reporting pesticide use, a protective buffer around homes and schools, and a new role for the Oregon Health Authority to assist in cases of pesticide exposure. None of this is extreme. All of it is necessary to ensure the simple human right to Public Health and Drinking Water Protection.