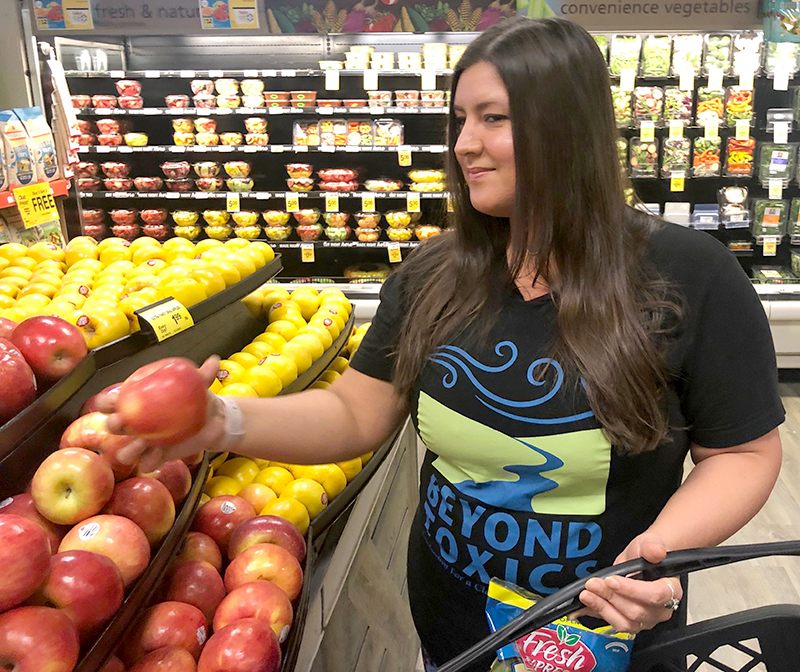 An Apple a Day Brings Pesticides Your Way

Today we’re partnering with Friends of The Earth to help them release a national study revealing unsafe levels of pesticides in commonly purchased grocery store foods, including data from Oregon. During late 2018, Beyond Toxics representatives participated in this research project by shopping at common grocery stores in Oregon, including Costco and Fred Meyer. We purchased some of the most commonly purchased foods in the U.S., including conventionally-grown apples, fresh spinach, oat cereal, dried pinto beans, and applesauce. We sent them to a lab for pesticide residue testing. The results came back showing that out of 15 states measured in the study, Oregon had the 2nd highest concentrations of organophosphates in apples! It’s important to know that there is no “safe” level of organophosphate exposure--even “low-level” exposure can have serious health consequences, especially for infants and young children.

Think about it, if a child eats just 1 organophosphate-treated apple at lunch every day, that child is regularly increasing their chance for brain-damage and health problems later on as their bodies grow and develop. This small amount of pesticide is just too much — and this doesn’t even take into account other chemical exposures children may experience throughout the year...via lawns, parks, school grounds, and indoor settings.

It's time for an aggressive policy reducing the use of pesticides. In response to the growing threat to Oregon’s food security and community health, Beyond Toxics is working with statewide allies to develop a suite of legislative efforts with the purpose of modernizing Oregon’s outdated pesticide policies. If passed, the proposed legislation directs Oregon’s regulatory agencies to ban deadly chlorpyrifos statewide, add bee-killing neonicotinoids to the list of Restricted Use Pesticides (i.e. remove them from consumer store shelves), and ensure that pesticide use is reported to a statewide system to understand and track their environmental impact. These actions will undoubtedly protect the quality and integrity of the food we eat, and lead to healthier children, family and ecosystems throughout Oregon.

This kind of policy update comes at a time when federal regulations and values are under attack. Scientific integrity and the protection of public health are being compromised by industry collusion with the current Administration and its oversight of the U.S. EPA. The most vulnerable Oregonians are our children, farm workers and families in rural communities. They need protection from pesticide residues in their food, and pesticide drift poisoning homes, schools, and workplaces. Oregon families should not have health problems and shorter lifespans forced on them because of corporate disregard for human and environmental health. If the EPA refuses to protect the health of our communities, then Oregon decision-makers must do their job to protect their constituents. The health of our communities depends on it.