“Living Downstream” in Deadwood, OR 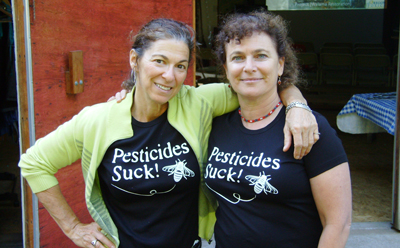 In late August our organization hosted an event in Deadwood, OR at their community center where we showed the film “Living Dowstream”, a documentary based on the book written by Sandra Steingraber, a biologist and author, whom you may recall came to Eugene earlier this year to speak about environmental health, pesticides, and human rights.

On the way there, Lisa Arkin (Executive Director) and I were discussing our role in pesticide reform along Highway 36 (the highway on the way to Deadwood) and her recent ODOT report. We stopped at various places to take pictures of areas sprayed with pesticides. I was taken in by the beauty of the area--such a mystical place--in full awareness that there were a patchwork quilt of clear-cuts patched in the valley, and pesticide runoff into the lake, streams and well water. Such a beautiful place, as if from a scene from "Lord of the Rings," and yet faced with so many environmental problems that affect all life including the people who live and work there.

Once we got to the community center, we were greeted by a fellow community resident and board member, Michelle Holman, and an OTA supporter to help us set up. I was immediately struck by a sense of the strong community there and as residents began to stream in, the place soon became packed! People were standing in the back since there were no more seats left. During the film, volunteers were rushing to and from the kitchen to stack plates, cups, napkins and coffee on the food table. The table itself was fit for a king, as community members joyously baked for the event, picked blueberries and tomatoes from their gardens, and brought homemade pies fresh from the oven. As I looked at the faces gazing up at the wall (we forgot the screen) where the movie was showing, I realized how special this community was. As the film showed, expressions of concern, awe, sadness, admiration were scattered throughout the audience which consisted of young and old, farmers and foresters, seasoned and “newbies” to environmental issues. Yet they all appeared to be on a mission.

After the movie, Tom Kerns, a human rights advocate, professor and OTA board member led a discussion on environmental health, human rights and pesticides, and strategies to move forward. I’m not sure whether it was the inspiring movie, Tom’s speech, or Lisa’s encouragement, but in those 30 minutes, the group debriefed the concerns of the residents, updated each other on recent relevant issues, determined possible solutions, and strategized next steps. So efficient were we, in fact, that people left with a stronger sense of mission and a determined focus to accomplish what was discussed. I thought, 'as an OTA representative, I better meet their expectations!'

Knowing that OTA is supported by such a strong community, filled with hope and determination, with a strong sense of values and a powerful willingness to fight for what is right, I felt honored to be part of this organization. At the same time, I felt challenged to ensure that our organization do our part in building leadership and justice for all in Oregon.