Hide and Seek: What is the forest industry trying to hide? 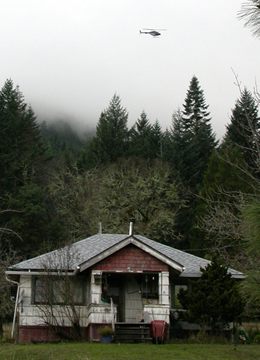 As a result of an R-G guest editorial last month, I sparked a firestorm of controversy proposing something simple and obvious: we should speak up if our government tries to convince the public not to worry about finding dangerous pesticides in the bodies of children who live in rural Oregon. Speaking up is not something terribly controversial from our point of view…and many of you wrote in to support our perspective.

In response to this editorial, a PR front group for the chemical industry recruited a local grass seed farmer from their board of directors to respond to the scientific evidence I presented. Here’s his jaw-dropping, arrogant retort: He thinks that finding pesticides in a child’s body is not a concern because there are “thousands of other chemical compounds that we could test for and find in that child’s urine.”

Really? Isn’t that a little like proposing that we put lead back into paint and gasoline just because lead is a toxic substance now found in children?

We realize it may be another David vs. Goliath battle, but we’re not backing down! The timber industry wields tremendous power, especially in Oregon – power to define regulations and policies, to amass financial power and social resources, and to marginalize grassroots movements. They would like to portray the pesticide drift problem in the Triangle Lake area as an isolated aberration, an odd blip from the norm, instead of the pervasive environmental problem it is for Oregonians in virtually every part of the state.

Here’s where it gets interesting. The Oregon Department of Forestry seems to be playing a game of “hide” in response to other state and federal agencies “seeking” accurate spray records.

First, a little background…Whenever pesticides are applied by a timber company, the Forest Practices Act requires that daily spray records are kept. These records must be made available to the government upon request for a minimum of three years. To figure how these dangerous pesticides are getting into children’s bodies, the government needs the private timber companies to turn over their records – describing what, where and when pesticides have been sprayed.

Three months ago, the Oregon Health Authority issued a request for those pesticides spray records for the purposes of the current Highway 36 Pesticide Health Investigation. The Oregon Department of Forestry (ODF) can demand the spray records from the timber operators pursuant to their authority under the Oregon Administrative Rule 629-620-0600(4). Timber companies are, so far, resisting government requests to provide their spray records.

By law, timber companies must produce the records within 7 days of the State's request, so those records should be available by now. But they have not been made available. That fact constitutes a violation of State forest practice regulations. It begs the question, is the ODF delaying attempts to get these records? In fact, Beyond Toxic members were told by ODF staff that they are “just trying to reduce hardship for the timber companies. We want to be fair to everybody.”

How is requesting records required by the law not “fair?” Is it fair for parents to worry if and when their children will get sick as a result of these pesticides in their bodies? We think it’s worth a little effort on the part of the timber industry to help us determine what the risks are to our families.

What you can do…

You can take action today by writing [email:doug.s.decker@state.or.us] or calling [(503) 373-7677] Doug Decker, the State Forester, and requesting that he take immediate action on two things :

1.) Demand the pesticide spray records NOW and impose a hefty fine on any timber company that delays handing these records over to the government investigation.
2.) Tell the Oregon Department of Forestry that it is time to make all forestry pesticide spray notifications and spray records available on a public access website.

All Oregonians have a right to know about chemical trespass. This information should not be held in secret by those using pesticides for industrial forestry.

Pitch in to support what we're trying to accomplish!