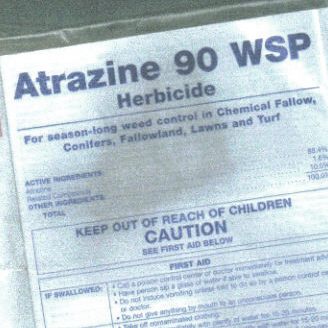 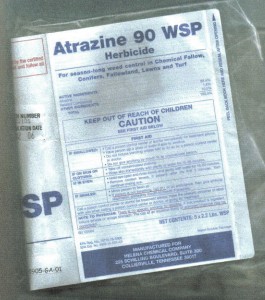 This bag of Atrazine was found dumped in a stream in the Highway 36 area. Atrazine was one of the forestry herbicides that was found in the urine of local residents.

I wish all of you reading this blog here were sitting with me as I write. Together we would mourn this week’s release of the report, Exposure Investigation: Biological Monitoring for Exposure to Herbicides in the Highway 36 Corridor. The report contains vague statistics about ways the government can “normalize” pesticide detections in our bodies.

I shake my head in disbelief at their murky conclusions. The report’s attempt to diffuse accountability and transparency help us understand how rural Oregonians, recently speaking at our rallies in Lane and Josephine counties (Chemical Trespass: Voices of the People) feel. Over 130 stood up to lament and protest against the wrongness and inhumanity of pesticide sprays by large industrial interests. We have to keep it up, get out and rally, sign petitions and take grassroots action!

I had to do my own math to realize that the investigation found the pesticide 2,4-D in the urine of 92% of local residents! I guess the investigation team was afraid to actually spell that out. The report also found 2,4-D in the urine of two children under the age of 6, but dismissed the significance of that by assuring us that at least it was “below the group mean” (note: they didn't disclose how far below the mean). I’ll bet their parents are not reassured at all.

The last sentence in the report’s conclusion states “Despite an apparent greater exposure than the US population, these data indicate that, at the time of testing, the participants were not exposed to 2,4-D at levels expected to cause adverse health effects.” Again, the investigators neglected to tell us the full truth - that the agency did find that levels of 2,4-D, even in the absence of active spraying, were above what was expected based on nationwide statistics!

Compare the conclusion of this report – our government’s responses to chemical poisoning from forestry pesticide exposures – to a recent court ruling and pesticide policy transformation in France. A few weeks ago, a French court ruled in favor of a grain farmer who was harmed by an herbicide and found chemical manufacturing giant Monsanto guilty of “chemical poisoning.” The farmer reported experiencing neurological harm including memory loss, headaches and stammering. Now the Court is requiring Monsanto to pay monetary damages for harming the farmer.

What’s more, the government of France is taking the issue of protecting the public’s health seriously: As the largest agricultural producer in the European Union, the country has pledged to cut pesticide use by 50 percent before 2018. This includes private farming and forestry.

Oregon’s response is a far cry from France’s wake-up call on pesticides and health. People exposed to chemical trespass in Oregon are told they are just “complainers.” Our state agencies treat Oregonians who file pesticide complaints with dismissiveness and disdain. Beyond Toxics has been trying for 4 months to get an appointment with the Governor’s Natural Resource advisor staff, and there hasn’t yet been a single answer to our many polite phone calls and email messages.

I believe that there are some underlying moral and scientific failings that have our state agencies running in the opposite direction of true public health protections.

1. Our society tends to doubt and dismiss women and women’s health problems. Many women in the Highway 36 Pesticide Investigation area have told authorities that, after a forestry spray they have had menstrual problems. I take offense that this Investigation tried to predict what a lifetime of chronic low level exposures might do to the hormonal systems of young girls and women of childbearing age by concluding that their exposure is “not expected to cause adverse health effects.” Case in point: in a presentation at the recent Environmental Law Conference at the UO, Dr. Hayes of UC Berkeley reported that exposures to forestry herbicide atrazine resulted in visible deformation of female breast tissue in laboratory experiments, changes associated with the onset of breast cancer. These cellular changes were found when atrazine levels were similar to those found in the Highway 36 folks.

2. The study said very little to nothing about what health problems people in the study have experienced. The study focused on amorphous statistics and never reported on the actual health problems. This de-humanizes those who agreed to be tested and ignore a history of cancer and other ailments reported by residents. Some people had illnesses just like the French farmer experienced.

3. The investigators made no mention of whether the 6 participants with statistically high levels of 2,4-D in their urine analysis are children, women, men and said nothing about their ages and occupations. Being reduced to mere statistics, we are less likely to think of these people as our neighbors who have a moral and medical right not to be subjected to chemical trespass from industrial forestry activities.

How dare the Oregon Health Authority claim that 2,4-D in the bodies of children “aren’t expected to have adverse health effects.” Why isn’t our government using the precautionary principle to keep our children safe?

If it is a constitutional right to be guaranteed safety of person and private property, why can’t we get a single government official to stand up for justice? If the entire country of France can acknowledge the importance of protecting people from chemical trespass by pledging to reduce pesticides and ban the worst of them, why hasn’t our Governor and our legislators said, by golly, so can Oregon!?