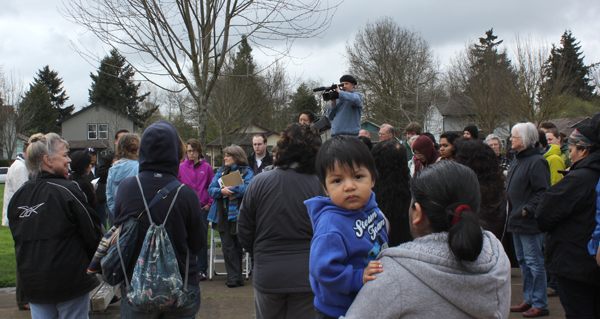 As if a wall of chemical gas is enveloping us...

“When we take our children to the playground, the smell of
chemicals overwhelms us. We can’t stay outside.
It’s awful … as if a wall of chemical gas is enveloping us.”

This is how one young mother described what it is like to live across the street from a chemical company in West Eugene. She spoke to over 75 people who attended Beyond Toxics’ Environmental Justice Bus Tour (the first-ever in Oregon). They met her in Lark City Park in Bethel where she takes her children to play. 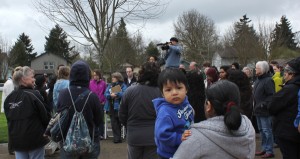 You might ask me, what was the purpose of our Environmental Justice Bus Tour? Beyond Toxics set out to demonstrate that we need a set of air toxics solutions based on a notion of justice, and not just a weak regulatory system. We did this with both facts and with the voices of vulnerable residents. I am proud that we were able to show that Eugene does have an Environmental Justice community because we don’t talk about this much in the public discourse. These residents are not able to enjoy their equal right to clean air and water and receive special consideration for children and pregnant women who are most at risk for harm.

I felt one thing that became very clear during the bus tour is that Eugene is actually two different communities, two different worlds of experience. Many people on the bus had never seen the row of air and water polluters along Roosevelt Avenue (hidden behind trees and frontage buildings); and they had never considered what it must be like to raise a family less than one block from some of the nation’s most notorious polluters (e.g., JH Baxters). In fact, link to this NPR Report on worst polluters and see what it is like in Eugene!

When we drove our bus north on NW Expressway, I described the scenario of coal trains entering Eugene’s rail yard to park and switch tracks – the length of one train would take up nearly the stretch of road hugging the west side of the River Road neighborhood. If coal trains are allowed to come to Eugene, there will be coal dust over gardens, on cars, coming in windows, and choking the lungs of very child in Trainsong and River Road neighborhood.

I was also struck by the look of realization on the faces of the travelers as we drove down Prairie Road and Highway 99, while adding up the cumulative exposures to some very dangerous air toxics. We learned that 99% of all the air toxics in Eugene are located in the Bethel 97402 zip code area – according to the Eugene Toxics Reporting system, about 500,000 pounds of airborne chemicals every year.

I saw the look of panic on some faces when we did an exercise (right there on the bus) showing how it feels to have an asthma attack. Some of the people on my bus said it felt like they were drowning from lack of air. I hope the data and the experience got people thinking –is it time to factor the intensity of daily exposures to these asthma triggers into a public health plan?

Beyond Toxics pointed out that Envision Eugene, the plan to expand Eugene city limits, recommends building new homes, schools and parks across the street from creosote factories, biomass plants, chemical manufacturers and sawmills (a distance of about ¼ to ¾ mile). I hope that people thought about the need to pay more attention to siting homes and schools near heavy industrial sites.

There will always be debates about the costs of protecting health versus the costs of doing business. An Environmental Justice bus tour attempts to get us past these arguments.

Our Environmental Justice Bus Tour overcame doubts and arguments by using both local data and the voices of local residents to expose the underbelly of Eugene’s toxic Industrial Corridor. We are calling on our City to hear the voices of the disenfranchised residents –Spanish and English alike. We need to put those voices at the forefront of decision-making processes on land use, air protection and public health.