Trainsong Park, near the train tracks, is just one of many locations that would be impacted by coal train traffic

The coal industry wants us to believe that coal exports are inevitable, and that supporting continued mining and burning coal is our destiny. I would argue that a beautiful community and renewable energy future is our destiny, and obsolete coal is the doom and desperation of Big Dirty Coal. 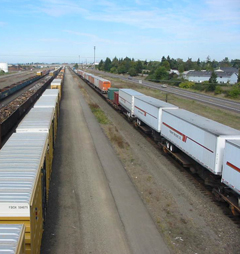 How will the proposed arrival of coal trains in Eugene and West Lane County impact our communities? I’ve thought of a few local landmarks that will be in the path of the coal train. I would enjoy reading what others think – what places are dear to you that will be impacted by four or more coal trains every day?

The Oregon Country Fair is a special spot that might suffer a tourism crisis if a coal trains passed within a few dozen yards. We’d see coal dust instead of fairy dust on those dancing, semi-naked bodies. The sound of screeching coal trains passing by eight times each day (round trip) would be unwanted percussion to the nightly jam sessions.

And sweet little Veneta. Last week, as I was having dinner at Our Daily Bread restaurant right off Highway 126, I chatted with another person about the coal trains. We both eyed the rail road tracks a few hundred yards from the restaurant. “I’m worried about what the noise and dust would do to our businesses here in Veneta,” the woman said. “A lot of people I know don’t want a coal train, but no one in Veneta has spoken out.”

One of my best friends and her husband routinely take their canoe out to Warren Slough, part of the Fern Ridge’s corridor of channels that lead through a very special wildlife viewing area. To get to the fishing areas south of the Reservoir, a canoe will have to pass directly under the rickety train trestle. Any coal dust spoiling a wetland, lake or stream would boost the acidity of the water and introduce heavy metals and pollutants that would, in turn, threaten aquatic life. As a consequence, the birds (and the people) that feed on the local fish would be harmed. 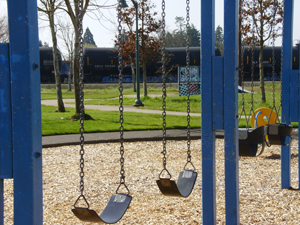 Trainsong Park, near the train tracks, is just one of many locations that would be impacted by coal train traffic

• Steward Ponds – a protected wetlands only .6mi from the coal train track.

• Greenhill Humane Society – dogs and cats that already have some trauma in the their lives would be subjected to train whistles and the heavy rumble of the train day and night – only .5mi separates the animals from the tracks.

• The Fern Ridge Bike Trail actually crosses the train tracks, so that if you are out for a pleasant bike ride and some exercise, you can take in a lung-full of diesel particulate and coal dust too!

I agree with Eric de Place from the Sightline Institute who put the coal train issue so well, “I think you’re looking at a sort of degraded Northwest that doesn’t look like the kind of Northwest we’ve seen in the past. The region has not been a heavily fossil-fuel-dependent economy ever in its history … all of a sudden (it would will be) very much embedded in the economy of the coal industry.” A degraded Country Fair and Fern Ridge Reservoir is not the vision I have for my community.

What’s your vision? What places do you care about? Please share with me.

And please join us this Saturday to march in the Eugene Celebration Parade. Our theme is "Raise the Roof! King Coal and the Fossil Fools." We need lots of folks participating to make a big impact. We’ve got costumes! Just show up!

Read more about how to find us!