Bees by the Numbers 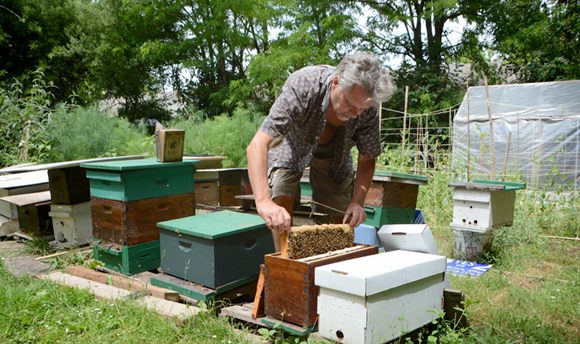 Philip Smith, Eugene-area beekeeper and owner of Blessed Bee, faces the prospect of going out of business in 2014 due to significant losses in his hives over the winter.

“Bees are as important to Oregon’s agricultural sector as water and the sun.”
- Alan Turanski, VP, GloryBee Foods

There are a lot of reasons to be concerned about the rapid decline of many species of bees worldwide. Honey bees and bumble bees have played a crucial role in human cultures for thousands of years. Today, even with more industrialized modern agriculture, the humble bee (both native and domesticated bee species) still plays a remarkably important role in bringing food to the tables of people all around the world. 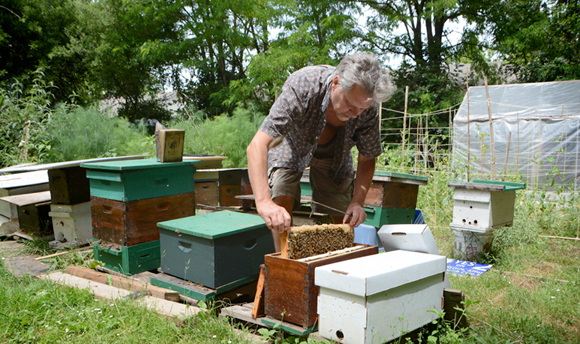 Now that environmentalists and beekeepers have publicized the increasingly clear connection between bee population declines and a particularly persistent class of pesticides called “neonicotinoids," there is pressure from powerful chemical manufacturers to show more proof.

If you’re not familiar with the crisis, the numbers and scope are sobering.

Beekeepers are reporting that bee populations are struggling and as each year passes, the operative word begins to approach a "CRASH," especially in the United States and Europe.

During the last six years, beekeepers have lost more than 30% of their hives annually.

U.S. domestic honey production for 2013 is projected to be the lowest ever recorded.

While many factors are believed to contribute to increasing bee die-offs, significant evidence links the use of a certain class of nicotine-derived pesticides, neonicotinoids with loss of bees.

Two major European studies released in 2012 linking neonicotinoids and bee declines (among other factors) led to a two-year ban by the European Union on the use of neonicotinoids in 2013.

But even without a smoking gun to prove that neonics cause the now-famous “Colony Collapse Disorder” occurring around the world, it behooves us to follow what is known as the Precautionary Principle. That approach is rather simple: when in doubt, err on the side of health of the public or the environment. The cold, hard numbers, when laid out plainly, prove that this approach is also to our benefit financially—for all of society.

The potential impact on business
An increasing body of evidence suggests that neonicotinoid pesticides threaten pollinators, thereby jeopardizing the agricultural pollination services they provide. This threat, in turn, jeopardizes those industries that depend upon those (free) pollination services.

According to the Agriculture and Consumer Protection Department of the Food and Agriculture Organization of the United Nations, the worth of global crops grown with the honeybee’s pollination was estimated to be nearly $200 billion in 2005. The disappearance of insect pollinators (various species of bees are the primary species involved) would create economic losses totaling $66.2 billion for fruit producers, another $66.2 billion for vegetable producers, and $51.7 billion for producers of edible oilseed crops. In the U.S., honey bees are responsible for at least $15 billion worth of crop pollination annually (Morse R.A. and N. Calderone. The value of honey bees as pollinators of U.S. crops in 2000. Bee Culture. The Magazine of American Beekeeping. 128(3), March 2000, 16 pp.)

On a more local level, a simple review of agricultural data (primarily via the US Dept. of Agriculture) provided a direct impact estimate for the state of Oregon: about $615 million per year of business activity could be affected by the demise of (free) pollination services by bees. That does not include losses to pollination services business, which has a reach all across the Northwest. Honey production alone is estimated to provide $4 million to Oregon business. These figures do not take into account value-added products produced from Oregon’s fruit or vegetable output dependent on bee pollination (juices, applesauce, jams, baked goods), nor products derived from bees (bees wax, etc.).

Using economics alone, we see that there is enough data to cause concern for the public and policy-makers alike. The evidence available should lead us to rely on the Precautionary Principle to let common sense prevail. The United States would do well to follow the European Union’s lead and ban all neonicotinoids until more is known about their impact on the dangerous--and costly--decline of bees.

Read our fact sheet, which shows the connection between the decline of bees and the potential damaging impact to Oregon’s agriculture–and therefore to the variety of food we rely on in the grocery store. For more about our Save Oregon’s Bees project: https://www.beyondtoxics.org/work/safe-public-places/healthy-bees-healthy-gardens/

NOTE: A significant portion of data and references for this blog were gathered by Northwest Center for Alternatives to Pesticides (NCAP) and is shared here with their kind permission. Read more about what you can do to contact your Representative in Congress and encourage support for the Save America's Pollinators bill.