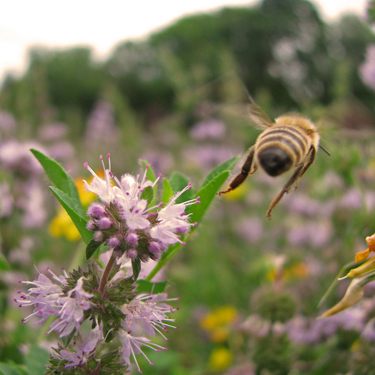 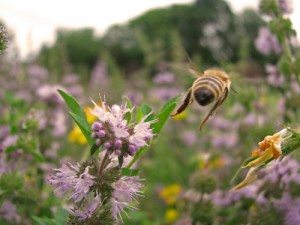 "Bee Seeing You" by Marie Sweeten

When I read the Oregonian’s “Editors’ Agenda 2014” editorial (1/5/2014), I felt compelled to respond. The editors urged Oregonians to pay attention to upcoming statewide issues that may either increase or decrease personal freedoms. One of the legislative bills they warn against is HB 4139, the Save Oregon Pollinators Act. Beyond Toxics is partnering with Representative Jeff Reardon, OLCV and Xerces Society to bring this bill to the legislature for a vote during 2014.

Careful readers will see that the Oregonian editors essentially dodged the two most important issues when it comes to discussing freedoms: the need for all of us to become better informed, and the responsibilities that go along with personal freedoms.

Of the items the editors listed as a loss of personal freedom was “restricting” the freedom to smoke cigarettes inside a car with children present, suggesting that a new law to reduce children’s exposures to second-hand smoke was “unjustifiable.” Really. Children strapped into car seats don’t have the awareness or ability to minimize their own exposures to carcinogenic smoke; they have to rely on adults. I think that the majority of Oregonians would agree that, along with the myriad of ways parents take responsibility to protect their children from harm, filling the interior of a car with cigarette smoke is a freedom worth postponing during the developmental years of a child.

Also, the editors made clear their support to provide illegal immigrants the chance to apply for driver's cards on the basis that they would drive anyway and it would be better if they had a mastery of traffic laws.  In other words, the freedom to drive should be restricted to those who are trained and licensed.

The editors, however, blast a proposal to require a state-issued license to those using a particularly venomous insecticide that builds up in the blossoms and nectar of plants, and kills bumble and honey bees on contact. It was such a class of insecticides, called neonicotinoids, which caused the massive bee die-offs in Portland, Wilsonville, Hillsboro and West Linn this past summer.

The editors suggest that home gardeners will suffer a significant loss of personal freedom if this highly toxic class of systemic insecticides is restricted. Just how many products would be unavailable?  Xerces Society did a review of neonicotinoids products intended for back yard gardeners and found that, on average, only 4 to 10 products would be removed from shelves because of this legislation.

A restriction is not a ban. The restricted use classification means only trained and licensed pesticide applicators or employees working under their supervision are allowed to use the pesticide. There are already 584 pesticide products that are restricted in Oregon.

In other words, much like taking the responsibility for driving a car, taking responsibility to spray such a potentially dangerous insecticide requires training and a license to ensure safer use.

Yes, you read that correctly.  Licensed applicators – who use the insecticides on a regular basis – take classes and pass a state test. Home gardeners could get training and a spray license if they wished, although it’s unlikely. That’s because consumers can choose from a large universe of alternative products that are less destructive to humans, pets and pollinators. Restricting pesticides from general consumer use is standard practice to protect the public from dangerous products.  In the case of neonicotinoids, Xerces Society found that a homeowner – even if following the labeling instructions –could apply a rate of poison that is many times greater than the rate legally permitted in commercial operations.

HB 4139, before any amendments, is a reasonable bill to the Oregon Legislature to add neonicotinoids to the existing list of government restricted pesticides. The proposal to restrict these pesticides to authorized users not only protects bees, it also protects billions of dollars in agricultural crops and products provided by bee keepers such as pollination services, honey and beeswax.

Oregon State University confirms that bees from California and the Pacific Northwest perform nearly half of the nation’s commercial pollination, valued at approximately $18 billion. This economic benefit is in addition to the estimated $3 billion in annual crops pollinated by undomesticated native bees. The 50,000+ bumble bees that perished in Wilsonville this past June were wild and native bees.

Researchers at Oregon State University and elsewhere find that this class of pesticides has a lengthy, toxic persistence in soil and water–sometimes as long as four years.

Our freedoms come with responsibilities when our actions may affect, directly or indirectly, people’s welfare and the environment. The responsible person asks the question of what is at risk. Is it the risk of having no more bumble bees and honey bees? Never having an almond or a blueberry to eat?  Seeing Oregon’s apple and pear industries go into a tailspin? We think that Oregonians want responsible legislation that helps prevent unintended harm and death to the hard working bees that make home gardens and bountiful harvests possible.