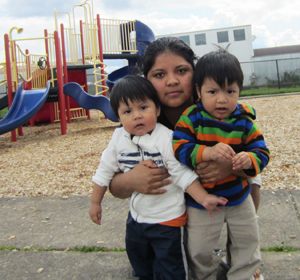 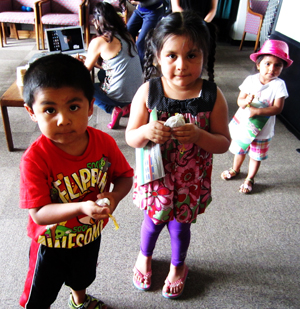 Kids at a Beyond Toxics asthma workshop in West Eugene

We’re just fed up. Beyond Toxics has used all available channels to warn the Lane Regional Air Protection Agency (LRAPA) that it is ignoring its duty to protect the most vulnerable members of our community. Now we must turn to the United States Office of Civil Rights to ask for help to ensure that LRAPA follows recognized standards of justice and public health protections for the families of West Eugene.

We’ve joined together with the Crag Law Center in Portland to file a formal Title VI Civil Rights Act complaint to the federal government.  Beyond Toxics’ complaint details how LRAPA, the county’s local air agency, refuses to acknowledge disproportionate impacts because of their decision to allow increasing amounts of particulate air pollution in neighborhoods in and around the West Eugene Industrial Corridor.

Title VI of the Civil Rights Act of 1964 prohibits agencies such as LRAPA from discriminating on the basis of race or ethnicity as a condition of receiving federal funding. It also protects low-income citizens from discrimination.  LRAPA is required to obey Title VI Civil Rights requirements.  If it doesn’t, its federal funding could be withdrawn.

Beyond Toxics has worked steadily for many years providing LRAPA with valid public health and socio-economic data. We have especially focused on trying to help LRAPA identify pollution exposure to children, vulnerable low-income and Latino residents. This is called environmental justice work, and is recognized as an essential, community-based environmental protection tool by the U.S. EPA.

Here is just a sample of all the ways we reached out to LRAPA in hopes of protecting public health, reducing air pollution and working with the Agency as a community partner.  Beyond Toxics has:

Documented that West Eugene is an environmental justice community in our 2013 report, “Environmental Justice in West Eugene: Families Health and Air Pollution“.

Amazingly, LRAPA arbitrarily claimed that an increase in particulate matter less than 2.5 microns (referred to as PM 2.5) would have no health effects. Yet the EPA has declared PM 2.5 as a serious health hazard connected to asthma, heart disease, stroke and early death.

LRAPA refused to conduct an analysis of pollution effects on minority and low-income communities, even after Beyond Toxics provided the agency with information about the West Eugene’s high rate of childhood asthma and the community’s concerns during public comment on the pollution increase in 2013.

The truth is that human rights norms are considered to represent a moral minimum for behavior of governments, a moral floor beneath which policy and state-regulated behaviors must not sink.  That is what we told LRAPA in our Human Rights Assessment back in 2009.

The increasing accumulation and synergistic effects of air toxins in West Eugene places a heavy overburden of pollution exposure on the children, minority and lower-income members of our community.   Beyond Toxics is watching out for public health AND taking action to make sure that local, vulnerable communities are not disproportionately affected.  We could no longer continue to implore our public “air protection” agency to do its job and obey the law, so we’ve turned to the Office of Civil Rights for enforcement. Beyond Toxics will continue to be tenacious and feisty to protect Oregon’s air and water for everyone.