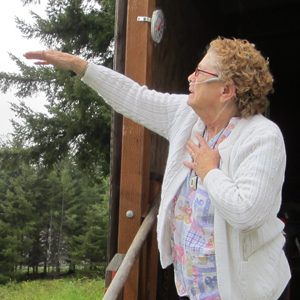 Cedar Valley resident points to the path of the helicopter that sprayed near her home.

As a way to mark the one-year anniversary of the Cedar Valley pesticide exposure, the University of Oregon and Beyond Toxics are hosting the conference “Herbicides and Health” in Lane County.  The keynote speaker is Dr. Tyrone Hayes, a professor of Integrative Biology at University of California at Berkeley.  Hayes will deliver the UO Environmental Studies Convocation lecture on Friday evening titled "From Silent Spring to Silent Night: Of Toads and Men."

Named an "Emerging Explorer" by National Geographic, Dr. Hayes' findings regarding hermaphroditism in frogs as a result of exposure to the commonly-used herbicide atrazine have earned national attention and controversy within academia and beyond.
Hayes’ research has clear ramifications for the people of rural Oregon who are being exposed to herbicides, such as atrazine, from aerial herbicide sprays throughout the state.

If the herbicide atrazine sounds familiar, it is because you’ve heard about the infamous agency investigation into aerial spray drift in Triangle Lake, just west of Eugene. In that case, the herbicide investigation revealed that unusually high levels of atrazine and 2,4D were found in the urine of dozens of Lane County’s residents.  These two powerful herbicides are commonly sprayed by helicopters during industrial logging operations. Pesticide drift is the suspected exposure route for forestry herbicides that are now found in people’s bodies. Beyond Toxics published an in-depth study of the data titled Oregon’s Industrial Forests and Herbicide Use: A Case Study of Risk to People, Drinking Water and Salmon.

In Cedar Valley, residents were sprayed with2,4D and triclopyr.  Neither these chemicals, nor atrazine are benign.  Thanks to the work of scientists like Dr. Tyrone Hayes, the public now knows that herbicides pose significant risks to people and wildlife.  For example, Hayes’ extensive research, as well as later studies by others, show that atrazine disrupts normal male hormone function.  In Hayes’ findings, male frogs develop ovaries, lay eggs, cease to be male and mate with other males. 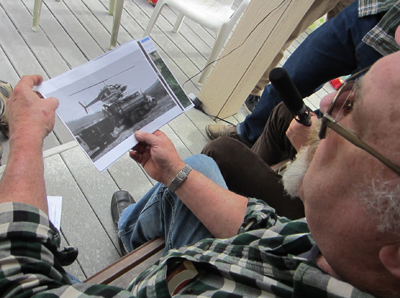 Chuck Ott, of Cedar Valley, shows a photo of chemicals being loaded into a spray helicopter.

Early field notes in the Cedar Valley investigation confirm the seriousness of people’s symptoms. People went to the emergency room for medical treatment, horses were blinded and dogs were unable  to walk.  The experience of Cedar Valley residents has made clear another example of government agencies failing to respond to public needs. Despite waiting an entire year, not a single health official has visited this community to investigate distinctive patterns of illnesses in both young and older people who showed up at emergency rooms coughing up blood, suffering intense abdominal pain and vomiting and experiencing severe asthma attacks.

The extent and severity of harm to health made the Gold Beach pesticide exposure investigation a test case for state agency emergency preparedness.  In a time of the crisis, our state agencies failed the test.

The Oregon Department of Agriculture kept the names of the herbicides secret for nearly seven months.  The Oregon Department of Forestry could not figure out which applicator had done the spraying because the law does not require accurate and timely record keeping by forestry operators.  The Department of Environmental Quality refused to analyze water samples to assure people their drinking water was safe. With the herbicide spray dropping on their drinking water sources, families had to resort to spending hundreds of dollars buying bottled water.

The agencies’ handling of the investigation left an Oregon community desperate for answers as to what they had been sprayed with, whether their drinking water was safe and what killed their pets.

The investigation was hobbled by lack of agency oversight.  Our state agriculture and forestry agencies monitor very few hazardous aerial pesticide applications.  Even when pesticides are sprayed near homes and schools, the applicators do not supply information about chemicals, amounts and rate of spray to state agencies.

Significant changes are needed to protect our health and the streams and rivers that are the source for our drinking water. The State of Oregon has the weakest and most outdated forestry chemical laws in the western states of California, Washington, Alaska and Idaho.  Oregon elected leaders should not allow Oregon to be the lowest common denominator in health and water quality protections.