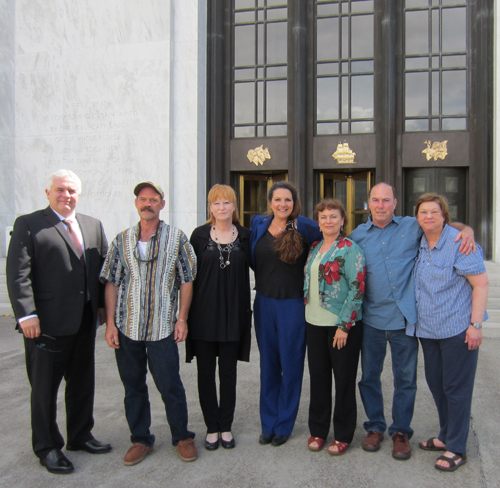 Poisonings of law-abiding Oregonians, innocent by-standers really, were covered by top journalists in both local and national press. Reporters concluded that the use of helicopters to spray neurotoxins near homes, schools and drinking water is a very serious threat to health and the environment. Everyone who took action on this issue should be proud that the practice of aerial pesticide spraying is now one of the premier issues facing our state legislators.

It’s no small accomplishment to find a thousand people attending town hall meetings and events in small to medium size rural towns--from Gold Beach to Roseburg to Newport. There was even a benefit concert in the tiny town of Nehalem that raised $500! Sixty Oregonians from seven different counties attended the Advocacy Day at the State Capitol in March.

Yet, it is becoming increasingly clear to the people of Oregon that there is little political will among many of our state legislators to protect our families and private property from the threat of pesticide spray.
Political operatives from chemical, logging and agricultural industry groups are busy muddying the facts and getting legislators to forget the many people who have reported becoming ill from aerial sprays. These Oregonians are now being ignored, despite repeatedly speaking out about how they must now endure the loss of their former healthy lives and their sense of security.

The public outcry moved the hearts of several caring legislators to craft SB 613, the Public Health and Drinking Water Protection Act. The goal of the bill is to bring Oregon up to date with the current science and environmental protection standards used throughout the Pacific Northwest.

SB 613 would enact three necessary reforms:
1. Buffer zones for homes, schools and drinking water.
2. Advanced notification
3. Public access to information on what was sprayed and where.
SB 613, as modest as it was, never got ONE hearing! I find it difficult not to wonder, 'Where is the backbone and resolve we deserve from our leaders?' and 'Who has the real power?'

The work groups were set up to fail from the start by giving the majority of seats to timber industry lobbyists and lawyers, people with personal financial interests in using pesticides. When that happens, industry lobbyists get veto power over everyone else. Industry lobbyists openly said that their profits outweighed any effort to pass protective regulations. In response to the question, “Would the timber industry support a 100 foot buffer zones around schools?” their answer was, “Absolutely not. We can’t see the economic benefit in that.” And that was the end of the buffer discussion.

The plight of the people sickened by pesticide spraying was treated with disrespect and disbelief. Clearly, not even a school yard full of children had any value compared to timber industry profits.

Please stand with Beyond Toxics and the good people whose lives have been forever changed after being sprayed. We will not be quiet or complacent about the Legislature's failure to protect public health and our forest ecosystem. Nor will we abandon this fight. We will continue to build strong and honest coalitions throughout the State. The rural-urban friendships and partnerships we established in this fight give our work deeper meaning. With your steadfast commitment to stay with us, we feel certain we will prevail and win an environmental health victory!

Right now, you can help keep a strong protective reforms on the legislative table. Let your state senators and representatives know you are incredulous that Senate Bill 613, which would have offered modest protections like requiring notice before a spray and creating buffers from spray around schools, won’t move this session. Tell them none of us will drop this issue. It is shameful that the timber Industry lives with better protections in other states, but Oregon doesn’t have a problem with a man mowing his lawn or a woman planting flowers in her yard getting sprayed with herbicides from a helicopter.

Are you interested in a rally at the Capitol? Let me know!