Preface by Lisa Arkin
Dr. Tom Titus was a guest speaker at the Legislative Briefing Day for SB 613. SB 613 was introduced as the Public Health and Water Resources Protection Act in the 2015 Legislature. His presentation on amphibians and herbicide exposure was so informative that we asked him to submit his thoughts for the Beyond Toxics blog.

Dr. Titus wrote the following piece before it was announced that SB 613 was not going to get a hearing in the Senate Environment and Natural Resources Committee, chaired by Senator Chris Edwards. 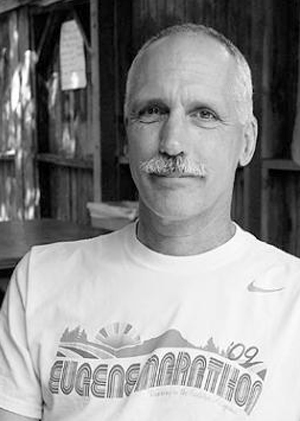 Politics are not my thing, and a helicopter with spray booms protruding like thin wings on either side sending a mist of herbicides drifting over a clearcut is not an image that inspires poetry. But it is an image you should keep in mind as you contemplate Oregon’s herbicide future. Imagine the whirling blades propelling the chemical cloud downward and outward. Ask the question: What is a reasonable buffer zone around water and human habitation for aerial spraying? Currently Oregon’s pesticide protections are less restrictive than those of Alaska, Idaho, Washington, and California. Oregon Senate Bill 613, the Public Health and Water Resources Protection Act, is the first legislation in four decades designed to bring the state’s herbicide regulations out of the dark ages.

Currently our state requires only a 60-foot buffer zone around fish-bearing streams and no buffer for streams without fish, even though many of these waterways contain amphibians and most flow into fish habitat. In 1996 Oregon removed all buffer zones around homes, only a few years after the federal government abandoned herbicide use on public lands. In contrast, Washington State requires a 200-foot spray buffer around human habitations and a 300-foot buffer along fish-bearing streams. Thus, Oregon’s buffer zone for fish-bearing streams is 1/5 that of Washington, and our protection for humans reflects the level of care for people living in herbicide application areas: zero.

SB 613 is not wild-eyed environmental legislation. The bill is not a ban on aerial spraying. It dictates reasonable protections for humans in areas of herbicide application by requiring advance notification of spraying and a publicly accessible database containing details of the herbicides applied, and it directs the State Department of Agriculture to establish buffer zones around places where people live, drinking water, and fish-bearing streams by the year 2017.

A vast literature now exists documenting the toxic effects of herbicides on animals. Atrazine causes feminization in amphibians and reduced sperm counts in all vertebrate classes studied so far. Dioxins in herbicides such as 2,4,5-T and 2,4-D influence a well-characterized biochemical pathway that can cause immune system impairment, developmental abnormalities, and cancer. Glyphosate is the most commonly applied herbicide in the United States and is used in western forests to control broadleaf competitors to Douglas fir. Pure glyphosate has a variable half life of 2-197 days, is bound to soil and degraded by soil microbes, and is “relatively” nontoxic to vertebrates. However, detergents and other so-called “inert” ingredients included in sprays to facilitate spreading and absorption on leaf surfaces can increase toxicity to fish and amphibians by an order of magnitude above that of pure glyphosate.

The herbicide Roundup Regular kills 50% of Pacific Chorus Frog tadpoles that are exposed to concentrations of less than half the EPA-accepted level for human drinking water. Toxicity studies on fish and amphibians are typically performed on life stages that do not address herbicide sensitivity of early embryos, particularly at stages before the development of the liver, the primary organ of detoxification. Studies on embryonic effects would be especially important for amphibians because herbicides are often applied to forests during the spring breeding season when eggs are laid.

Most ecotoxicology studies have dealt with the direct effects of herbicides on organisms. There are few data on indirect ecosystem effects. What is the effect of removing early succession browse on elk and blacktail deer populations? How do endocrine-disrupting chemicals affect sex ratios of exposed vertebrate animals, their fertility, embryonic and larval growth, and size at maturity? Why are there now so few crayfish in many coastal streams, and what is the outcome of removing these key scavengers on nutrient turnover and on their predators such as sea-run cutthroat trout and river otters? What we do not know is daunting, and yet it is precisely because we don’t know that timber and chemical companies say we should persist with the status quo. Shall we continue to accept that the burden of proof for chemical toxicity falls on people who are worried about or have experienced harmful effects? What has become of the doctrine of “Do No Harm”?

We are self-centered animals and respond more strongly to human health concerns than to those of our fellow creatures. Herbicides make people sick. This is now well documented in a huge body of biomedical literature that is beyond the scope of this essay. Just last month, a research paper implicated glyphosate in elevated risk of non-Hodgkins lymphoma. Stories of people and animals sickened by herbicide overspray come from a dozen Oregon counties, the most recent out of Cedar Valley in southwestern Curry County (see the documentary film Drift: A Community Seeking Justice by University of Oregon Environmental Studies students). Residents were thwarted by the Oregon Department of Forestry in their efforts to find out what had happened to them and why.

As the fight over SB 613 becomes increasingly public, you can count on the timber and chemical industries with a profit margin at stake to play their economic card. Yet there is no reasonable economic justification for rejecting SB 613. Chorus frogs don’t earn minimum wage. Salmon and trout do not care about board feet or economic “growth.” These are human abstractions imposed on the biosphere that are now accepted as reality in biological cost-benefit analyses, as though they mattered to anyone other than people. Even if economics were a reasonable platform from which to argue best forest practices, the largest companies applying herbicides on Oregon forests operate without economic hardship in Washington, Idaho, and California under stricter rules. They might be making more money in Oregon because of our lax regulations, but they are certainly not going broke elsewhere.

Speaking of human constructs, we will we always be beholden only to property lines? The U.S. Forest Service has not allowed aerial spraying on public forests since 1984. The Bureau of Land Management does not even spray their roadsides. Yet we bow to imaginary lines of ownership and allow vast tracts of private forest land to be sprayed, largely as the owner sees fit, even though streams flowing through that private land continue into public waterways that harbor drinking water and coho salmon and giant salamander larvae. The owners of private lands care about profits, not the public trust, and will act accordingly in their forest practices. As long as the laws follow property lines and profit at the expense of ecosystem health, including human health, then making money will remain the name of the game.

Call and write to your state senator and representative and tell them you support herbicide reform in Oregon. For more information, stay in touch with Beyond Toxics.