The Humble Bumble Gets Its Own Day of Gratitude 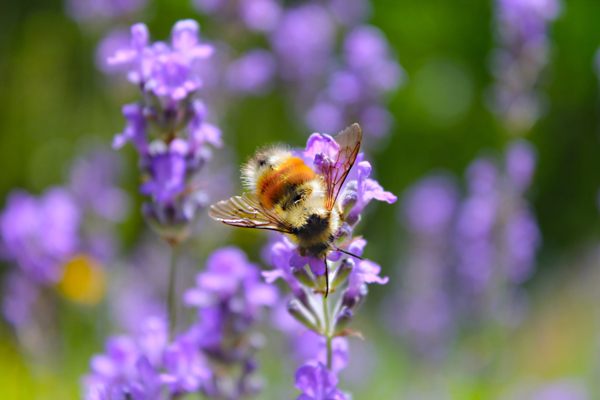 Photo of bumblebee by Cole Keister

Have you been enjoying watching the furry bumble bees visiting your garden flowers? They seem to be out-and-about, buzzing the blossoms just at dawn, and hanging around for that last nectary drop even as the sun sets.

Cherish them as they flirt with your oregano and lavender. Despite their apparent bounty in your garden, native and wild bee populations are in serious decline, perhaps nearing extinction.

Recognizing this reality, Beyond Toxics petitioned Oregon’s Governor Kate Brown to proclaim an annual day of awareness to save Oregon’s native bees. We are proud to announce that Governor Brown has proclaimed August 15 as Oregon’s Native Bee Conservation Awareness Day! We are very grateful that the Governor has recognized that collectively, we are all responsible to learn more about the importance of native bees in the natural world and take action to protect their survival.

Oregon is the first state in the nation to declare a special statewide day of conservation for wild and native bees. It was also in Eugene, Oregon that Beyond Toxics successfully initiated the first municipal ban on the use of neonicotinoid pesticides. Our hope is that the Governor’s action will encourage a nationwide call to action to save wild bees.

We act out of deep concern that native bees, such as bumble bees, sweat bees, mason bees and the other 4,000 native bee species in North America, are at risk for precipitous population decline. Troubling trends are already observable. The Western bumble bee (Bombus occidentalis) was once the most common bumble bee in the Pacific Northwest, now it is rarely seen. The Franklin’s bumble bee (Bombus franklinii), a bumble bee endemic to the Klamath mountains of Oregon and California, appears to have recently become extinct.

Researchers are finding that bumbles and other native bees are in jeopardy from environmental stresses including habitat loss and pesticides. Unlike honey bees living cooperatively in hives with many worker bees, most native bees are solitary. If the mother bumble bee is poisoned and does not return to her nest, all her offspring and future generations perish. Each native bee is essential to species survival.

Last month, I received a call from a Portland resident who saw bumble bees dying on a sidewalk underneath Linden trees. This was the 5th report of similar bee kills in Portland within the week. We reported it to the Oregon Department of Agriculture, which started an investigation. They sampled plants and dead bees for neonicotinoid pesticides. Laboratory analysis indeed showed the presence of neonicotinoid pesticide residue in plants as well as the dead bees.

The investigators’ unexpected finding was that the trees had not been recently sprayed. In fact, earlier this year, the state of Oregon banned the use of the four most commonly used neonicotinoids. The Department went over pesticide records from the past and determined that the bees were poisoned by a neonicotinoid spray from a full year ago, before the ban.

How did the bees die? It is suspected that the neonicotinoid applied to a plant in 2014 is still potent enough to kill bumble bees in 2015! These systemic pesticides are often used as a soil drench or injection months before flowers are blooming. They move through the tree to end up in plant pollen and nectar, which are the sources of food sought by bees. Neonics are manufactured to be systemic and persistent. They are designed to concentrate in the flowers and leaves.

Native bumble bees are highly attracted to Linden trees. Exposed to neonic poisons, they may die on the spot or a few hundred feet away. When native bees don’t make it back to their nest, their offspring are doomed. The toxicity of pesticides negatively impacts some native bees much worse than honey bees.

The survival of each native bee is essential to ecosystem biodiversity. At stake is the future of 70% of the flowering plants and trees, and the nuts and berries that feed birds and animals.

We encourage individual action and better policy to reverse the decline of native bee populations. Please stop using pesticides and protect native bee habitat. And contact your Governor today and ask them to declare August 15 as your state’s Native Bee Conservation Awareness Day!