Highly toxics pesticides should not be sprayed on workers, but the Oregon Department of Agriculture concluded that is what Oregon-based Applebee Aviation did to its employees. On September 30, the Department, which is responsible for regulating state and federal pesticide laws, issued a citation revoking the Applebee’s operating license in the state of Oregon and levying a fine of $1100. 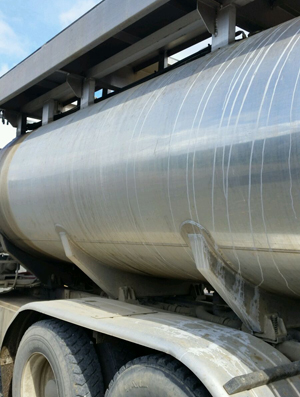 Herbicides leak out of an Applebee truck in Douglas County. Photo by Darryl Ivy.

We should also hear from the Oregon Department of Transportation. Applebee Aviation is accused of leaking very hazardous, restricted-use herbicides, such as atrazine, on public roads and in public parking lots. How would you like to park your car and step out onto pavement where an Applebee truck had just leaked atrazine?

The crackdown came after Darryl Ivy, who worked as an Applebee Aviation hazardous materials truck driver, became a whistle blower reporting on dangerous and unsafe practices he witnesses during numerous aerial spray operations. Ivy recorded videos of the illegal activities on his cell phone before he went to an emergency room for treatment of illness due to pesticide exposure.

“I had sores and rashes, was spitting up blood and felt very sick after three weeks on the job,” said Ivy. “I’ve worked in a lot of dangerous occupations before, but had never seen such careless treatment of workers and poor work practices that put all of us, nearby communities and the environment at risk of pesticide contamination.”

“I felt it was my duty to report what I witnessed to the authorities,” said Ivy. “The results of their investigation proves that Applebee’s pesticide practices are illegal.”

Darryl learned about the work of Beyond Toxics after attending our town hall meeting in Roseburg, “Forestry Herbicides and Health.” He attended the event because he was instructed to do so by his employers. Many of the one hundred attendees were employees of Seneca and Applebee Aviation. 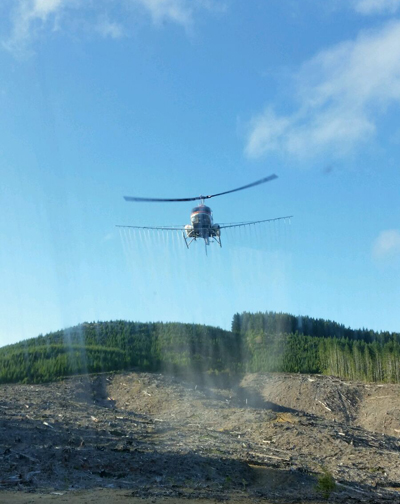 Helicopter spraying pesticide over Darryl Ivy’s truck as he sought refuge inside the cab. Photo by Darryl Ivy

As part of their investigation of the Darryl Ivy case, OR-OSHA cited other cases where Applebee had not properly reported accidents, deaths and injuries of workers. As recently as September 2015, an Applebee Aviation chemical delivery truck crashed and spilled 500 gallons of water mixed with glyphosate as well as jet fuel just off Highway 199 in California near the Smith River. Ivy had previously reported to authorities that Applebee did not properly maintain the brakes and pesticide tank seals on their trucks. He gave the state agencies photographs of pesticide batch trucks with leaking seals and streams of pesticides dripping down the sides of the tanks. You can view three of Darryl’s photos here.

The response from two state agencies comes on the heels of a weighty discussion at the Oregon Legislature after hearing dozens of complaints about poisoning from aerial pesticide sprays.  Helicopter companies like Applebee Aviation spray tank mixes of herbicides on thousands of acres of Oregon forests.  Beyond Toxics worked with legislators during the 2015 session to pass HB 3549, a bill to help address a long history of public complaints about getting sick from aerial pesticide sprays.

Although new laws were passed to establish no-spray buffer zones around homes and schools and set stiffer fines for pesticide violations, legislators barely scratched the surface of the problem. Darryl Ivy’s case is another striking example of the highly hazardous practice of aerial pesticide spraying hurting workers as well as nearby residents.
Residents in at least eleven Oregon counties have come forward to report being sickened from aerial spraying of industrial timberlands. Symptoms include nausea, rashes, diarrhea, headaches, asthma, bleeding noses and eye damage.

The state agencies cited numerous violations, including:
• not training workers how to handle hazardous pesticides;
• not providing chemical safety data sheets;
• not providing protective gear to prevent chemicals from splashing into eyes and onto skin;
• not conducting monthly inspections of equipment and vehicles;
• neglecting worksite safety and not caring out required worker safety inspections;
• having workers wash their pesticide-contaminated clothes in public laundry facilities without proper precautions to prevent contaminating other people’s clothing.

Applebee will be required to provide proof that the company has fixed more than a dozen identified problems before it can get re-licensed for business in Oregon.
This latest investigation gives the public an insider’s view of the deplorable safety standards for poisonous pesticides that occur in Oregon. State agencies know very well that these violations are common, but it took a whistleblower’s documentation to bring any inquiry and action.