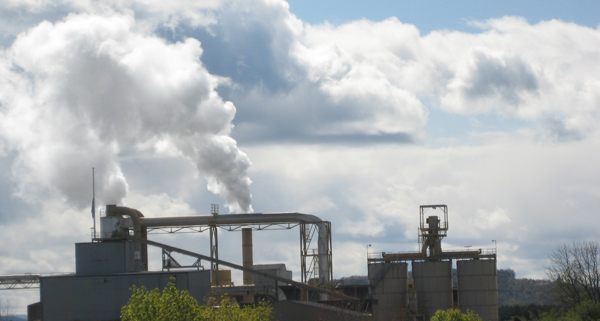 The "flakeboard" factory in West Eugene

By Mary O'Brien and Lisa Arkin

It's important to know when you're being poisoned by industrial toxic discharges, whether to air, water or land. Some would even say you have a right to know. But how much you can know depends on good laws. Gaps and loopholes in federal and state regulations have allowed stained-glass manufacturing companies to pollute Portland residential neighborhoods with heavy metals without anyone knowing that extremely hazardous air pollutants were going into the air.

State officials stressed how "caught off-guard" they were when a U.S. Forest Service air monitoring study revealed very high levels of cadmium and arsenic in the air of several inner-city Portland neighborhoods. Thousands of people had been unknowingly exposed for decades.

In 1996, the citizens of Eugene amended their city constitution to make it everyone's right to know about even small amounts of toxic chemicals that local manufacturers are using and emitting. The businesses, of course, were already keeping careful track of their dollars coming in and going out. We were sure they could do the same for toxics. And now they do.

Each year, Eugene businesses using more than 50 pounds (5 pounds for extremely hazardous substances) of hazardous chemicals file a report with the fire marshal. The report covers chemicals federally listed in the Clean Air Act, the Clean Water Act and the Resource Conservation and Recovery Act. Accuracy is accomplished by requiring businesses to report the amount of chemicals brought onsite each year and where each toxic has gone — for instance into the air, water, stored on-site, trucked away as waste or incorporated into a product. Sensible and reliable, this reporting program is called the Community Toxics Right-to-Know law. The fire marshal's detailed report is filed online for public access, 24/7.
In 1999, under pressure from the Associated Oregon Industries, the Oregon Legislature voted to adopt onerous and complicated provisions making it virtually impossible for other communities to implement a community toxics right-to-know program. Oregon Gov. John Kitzhaber would have had the votes to uphold a veto; he didn't do so, ignoring the need to protect public health.

Fast forward to Portland in 2016. The Department of Environmental Quality (DEQ) indicates they knew that cadmium and arsenic were elevated in Portland's air prior to the Forest Service monitoring, but they didn't know where the emissions were coming from. That's because businesses do not currently have to report toxic discharges less than 10 tons per year. Under Eugene's system, chemical reporting is by the pound, not by the ton.

However, these smaller sources of toxics add up. Simply put, Portland's plumes of cadmium, arsenic and chromium went up in the air and fell right through an information and regulatory gap. The situation with glass manufacturers could just be the tip of the iceberg. If Bullseye Glass and Uroboros Glass were located in Eugene, the DEQ (and the public) would have immediately known all the sources locally emitting cadmium and arsenic. Everyone would have been able to track historical emissions trends, as well as determine whether other nearby polluters were adding to the problem. Knowing might mean the difference between a resident being exposed for a short time, or in the case of Portland neighborhoods, a very long time.

While the wheels of toxics regulatory reform turn extremely slowly if at all at the state and federal level, communities throughout Oregon could enact right-to-know laws within the next two years if Oregon's Legislature would take its foot off the communities' necks — and their lungs and children. All it has to do is allow Community Toxics Right-to-Know, based on Eugene's tried-and-true model. Reporting toxics in, toxics out. Posting the information on a website. It's that simple, and it's a heck of an incentive to stop using toxics unnecessarily, because everyone is watching.
•
Mary O'Brien, Ph.D., is Utah Forests Program Director with the Grand Canyon Trust and original author of the "Eugene Toxics Right-to-Know" charter language. Lisa Arkin is executive director of Beyond Toxics, a statewide environmental health and justice organization, and an appointed member of the Eugene Toxics Board.