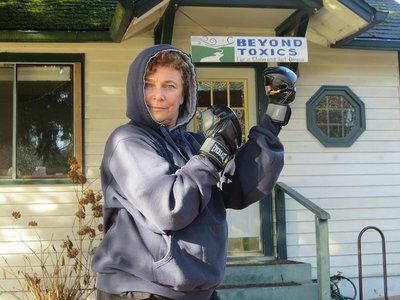 AERIAL SPRAY RESPONSE:
(this was published as a Letter to the Editor of the Eugene Weekly)

The Register Guard published a Nov. 30 guest viewpoint written by former Lane County Commissioner, Anna Morrison, who no longer lives in Oregon. Displaying her ignorance, she suggested that aerial pesticide sprays are nothing to worry about.

If Morrison had done her homework about aerial sprays, she could have started with Arizona, her new home state. Arizona laws require a 1,320-ft. buffer zone for schools to protect children from pesticide drift. Homes and health care facilities in Arizona are protected by no-spray buffers over 20 times larger than Oregon’s laws.

So how can Morrison falsely opine that Oregon’s paltry 60-ft. pesticide buffers are the nation’s best? Oregon timber trespass laws are Neolithic compared with other states. Arizona, Washington, California and Idaho require large protective buffers because their laws are based on science. Each state recognizes pesticide drift as inevitable.

What’s more, she slammed Mountain Rose Herbs, a local company that provides jobs for 200 people, for following reputable business practices — destroying plants they found were contaminated with the timber herbicide, atrazine and taking the economic hit.

State regulators have rarely sanctioned these pesticide trespass violations. Complaints about ill health and ruined property are not well accounted for by state agencies — take the 2013 Gold Beach case where over 35 people reported being poisoned. That egregious case was counted as a single complaint!

Despite our state's problems with proper reporting, pesticide testing and public accountability, the herbal company alerted the public because as owner Shawn Donnille said, “people and organic crops should have a basic right to avoid being sprayed by dangerous chemicals.”

Beyond Toxics introduced 2015 legislation to require hefty buffers and advanced notification of aerial herbicide sprays. Timber lobbyists did everything to block our science-based recommended changes to timber law. With no other protective options, Oregon must ban aerial spray.

I would be pleased to welcome Morrison to a public debate on the Oregon's forest practices act, and its failure to protect people, communities, drinking water and fish habitat. We could also discuss the impact of clearcut logging on climate and carbon. Real facts required. Let's not let the timber industry hide the truth in the guise of another misleading opinion piece.