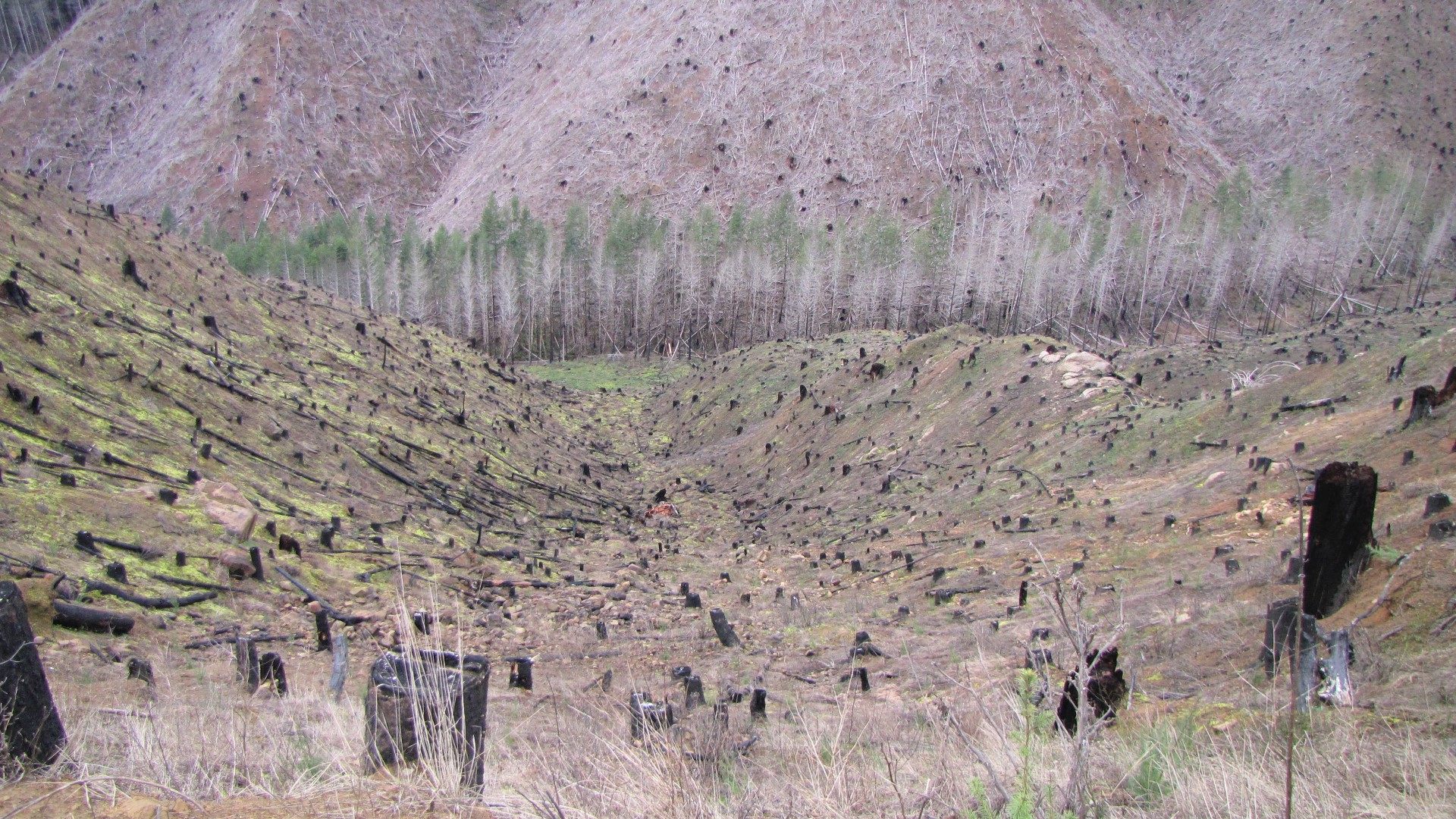 The above photo is what legal stream protection in Oregon looks like. This photo was taken at an oxbow clearcut site in the Oregon Coast Range.

It is all of our duty to hold our elected leaders accountable for actions that put the health of our communities at risk. Beyond Toxics has been working for 4 years to bring sound scientific reporting and analysis of forestry pesticide applications into the decision-making processes at our state capitol.

Oregon Public Broadcasting (OPB) did an investigative report and found that the Oregon Department of Forestry (ODF) suppressed a scientific water quality assessment by the Department of Environmental Quality. Read the full OPB report

In Oregon, surface water, drinking water, and human health is poorly protected, or not protected at all, especially compared to the regulations and policies in place in our neighboring states of Washington and Idaho. This is why it’s so important to review and consider scientific data and facts when making decisions about the impacts of industrial forestry practices on Oregon’s drinking water and salmon streams. Read the Oregon’s Industrial Forests and Herbicide Use report to learn how The Oregon Forest Practices Act prevents the public from knowing about pesticide use and potential threats to human and wildlife health.

This is but one way Oregon's timber industry bullies government agencies into disregarding environmental health and safety for Oregonians in favor of driving timber profits higher. Coastal towns have struggled with contaminated drinking water for years after herbicide sprays and increasing amounts of sediment in streams from the landslides that result from clear-cutting on steep slopes. See the video Timber's Cover-Up to learn more about how forest ecosystems are interrupted and destroyed by conventional industrial forestry.

The following letters were sent to The Board of Forestry and Governor Brown in response to the issue of the Department of Environmental Quality & Oregon Department of Forestry ignoring an important scientific report on public resources and drinking water in the Oregon Coast.

*Please consider writing your own letter voicing your concerns to Governor Brown and also the Board of Forestry.*

Dear Members of the Board of Forestry,

On behalf of our 50,000 members from all across Oregon, the eight undersigned organizations write to you today with serious concerns over recent revelations that the Oregon Department of Forestry (ODF) suppressed an important scientific report aimed at protecting human health and clean drinking water on the Oregon Coast.

On January 6, Oregon Public Broadcasting featured an investigative report which described how lobbyists from the logging industry and staff with the Oregon Department of Forestry, specifically State Forester Peter Daugherty, pressured the Department of Environmental Quality (DEQ) to suppress a scientific report on the risks that industrial clearcut logging practices may pose to clean drinking water in Oregon’s coastal communities.

Many aspects of this investigative report are troubling, not the least of which is State Forester Peter Daugherty’s denial of long-settled science regarding clearcutting, steep slopes, and sediment washing into streams that supply drinking water. Mr. Daugherty’s comments in the OPB story and in the public records the story references demonstrate efforts to suppress concerns about landslide risks from clearcutting, despite the fact that DEQ specifically included scientific references to landslide risks in its study.

We urge this board to take action to ensure that ODF, and the State Forester refrain from such behavior in the future, and take the following steps:

The people of Oregon must be able to trust that regulatory bodies tasked with protecting clean drinking water and human health in this state are working in the public interest, and not at the whim of corporate lobbyists. Please act quickly to address the grave concerns many have voiced over the behavior of this Board and ODF, and take meaningful steps to regain the trust and faith of the many Oregonians who depend on Oregon’s forests for our drinking water.

Dear Governor Brown:
On behalf of our 50,000 members from all across Oregon, the eight undersigned organizations write to you today with grave concerns over recent revelations that an important scientific report by the Department of Environmental Quality (DEQ) aimed at protecting human health and clean drinking water on the Oregon Coast was suppressed through political and agency pressure. We urge you to instruct DEQ to complete and release the 2015 drinking water report, direct your staff to develop and implement policy changes needed to address the issues the report identifies, and appoint a member to the Oregon Board of Forestry who is qualified to bring an understanding of hydrology and water quality to ODF that is currently lacking.

Oregon Public Broadcasting (OPB) featured a story on January 6 from reporter Tony Schick which described how logging industry lobbyists, Oregon Department of Forestry staff, and some legislators applied pressure on DEQ to suppress a scientific report on the risks that industrial clearcut logging practices may pose to clean drinking water in Oregon’s coastal communities. The OPB story raised many concerns which we hope you share. From the story:

“The fate of that report offers a glimpse at what can happen when a state environmental agency’s
work runs afoul of a politically influential industry. It also shows how, on certain forestry issues, the
agenda of state regulators aligns more closely with the timber industry than with concerned citizens.”

Many aspects of this investigative report are troubling, not the least of which is State Forester Peter Daugherty’s denial of long-settled science regarding clearcutting, steep slopes, and sediment washing into streams that supply drinking water. Mr. Daugherty’s comments in the OPB story and in the public records the story references demonstrate efforts to suppress concerns about landslide risks from clearcutting, despite the fact that DEQ specifically included scientific references to landslide risks in its study. That a senior leader in the agency would deny the very existence of this science is deeply troubling.

There is a growing accumulation of evidence which leads us to question the behavior of ODF staff and the Board of Forestry that oversees the agency. This pattern of denying science and evidence that proves inconvenient to the logging industry is akin to the tobacco industry’s denial of cancer links, and the oil industry’s denial of climate change. This is the same pattern that led to the air toxics scandal in Portland and lax oversight of a host of other environmental and human health concerns in our state.

Additionally, the OPB story draws attention to the cozy relationship between ODF and timber industry lobbyists. Rather than working to protect Oregonians and the environments we live in, some ODF staff appear to operate on guidance to shield the very industry they regulate from Oregon citizens who expect the agency to enforce forestry rules that keep them and their drinking water safe.

In the past few years OPB, The Oregonian, and many other local news outlets have featured stories that highlight concerns from places like Rockaway Beach, where clearcutting and aerial pesticide spraying have severely damaged the town’s drinking water supply; or Triangle Lake, where the local school, surrounded by clearcuts, found forestry herbicides in the children’s drinking water; or Gold Beach where over three dozen residents complained of illness, property damage and contaminated drinking water from chemicals released by aerial herbicide spraying. These stories give voice to towns like Yachats, whose Mayor went on the record in 2015 to state that clearcut logging dried up the town’s drinking water source a statement supported by research from Oregon State University (OSU). (Jones, Perry 2016)

Governor Brown, Oregonians are counting on you to break this inappropriate relationship between corporate interests and the agencies that are supposed to oversee them. We believe it is important at this time that the Governor's office take action that demonstrates this behavior is unacceptable, and that Oregon will act decisively to protect human health and clean drinking water regardless of where affected communities are located. We cannot allow Oregon to become a state with one set of rules for polluters in Portland, and a second, weaker standard for polluting industries in the Coast Range.

You can restore confidence in DEQ and other state agencies by acting quickly and decisively to address this situation. Specifically, we urge you to take three actions as soon as possible:

Governor Brown, we know that you share our concern for clean drinking water and human health in Oregon. As a state we must not allow corporate lobbyists to dictate what scientific evidence our regulatory agencies are allowed to consider in protecting those values, or allow them to completely capture a major state agency to the point where it advocates against public health rather than for it.

Please act quickly to address both the scandal around this report, and the urgent need for stronger rules to protect clean drinking water and community health in our coastal communities.